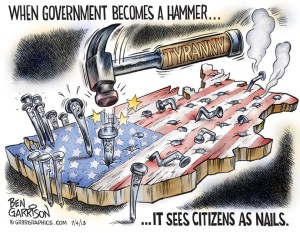 The epidemic of authoritarian abuse in America creates thousands of victims every year, yet seems to be largely ignored by mainstream media.  Most Americans can easily justify the actions of law enforcement citing the difficult job they do, the dangers they face, and their service to the community. It’s pretty easy to swallow a few kicks on a cuffed scumbag or personal rights violations in the name of public safety, and many people can easily sympathize with the desire to kick the shit out of a child molester or search the vehicle of a shady looking character. Those certainly aren’t constitutional values, but even the desire for justice can have a dark side.

The attitude of, “They probably deserved it,” has gotten a bit out of control though, and when mixed with equal doses of apathy and righteousness it becomes the platform on which despotism is built. We all know the clever quotes about evil succeeding when good men do nothing, and atrocities being committed by those who are doing their duty, but lip service to these ideals is all that seems present on any level of our society; social awareness is quite popular when assigned a ribbon, slogan or logo.

Others can easily dismiss such authoritarian abuse as irrelevant to them personally; after all, they are doing nothing wrong and have nothing to hide (though they don’t seem to expect government to uphold the same standard). Such a position is doing something wrong by American standards though; it is hiding from your civic responsibility to protect your community from violent criminals with badges. That is not the exercise of personal liberty; it is the denial of social justice.

Tens of thousands of Americans each year are subjected to official oppressions and worse. Don’t believe it? Just ask Angel and Ashley Dobbs who were subjected to a body cavity search, in public, with the same glove, for a suspicious smell, though nothing illegal was found in their possession and they were not charged with a crime.

Ask Michael Morton, who spent 25 years in Prison after being falsely accused of rape because a prosecutor barred evidence being presented; a crime for which later that prosecutor-turned-judge was given only 10 days in jail for contempt of court.

Ask Kelly Thomas, who was beat to death by six police after they spent almost a half hour harassing him on the sidewalk for loitering.

When the law becomes a hammer, we are just nails waiting to be taken out of the box with the next handful, and pounded with brute force into the justice system.

These aren’t isolated incidents; just look for yourself and you will see the police that are extorting sex from women. With minimal effort you can identify the judges who sell the rulings of injustice to the wealthy. Without even trying, you can probably think of several examples of politicians selling their votes and playing favorites. Before our very eyes, the business executives that are destroying the American economy have been appointed cabinet positions for more than three decades.

This is an epidemic of authoritarian abuse we are experiencing, but it is only a symptom of a far more deadly disease, and much like the tickle in the back of our throat and runny nose, we are fools not to view them as the potential for a serious threat to our health.

What will it take to make Americans wake up to this monumental threat to our lives and freedom?

Will you have to be stopped for a traffic violation and find yourself bent over on the side of the freeway with a cop’s two fingers knuckle deep in your anus before you acknowledge the problem?

Will you call the police for a domestic dispute and have them show up and kill your dog or unload a magazine in your child, spouse or parent before you recognize the brutality?

Will you receive a bill for the multiple colonoscopies that you were sexually assaulted with before you object to the human rights violations?

Or will you simply be in the wrong place when a few steroid enraged cops decide to beat the shit out of you, and then arrest you for assaulting an officer of the law?

Even a person suspected of heinous crimes is accorded certain rights when brought to justice in America – a custom which is necessary to the moral and just deliverance of legal judgment upon a free people – but under the completely disingenuous guises of prohibition on drugs and militant acquiescence to terrorism, in the name of morality, an honest citizen need not break any law to have their personal livelihood shattered and everything they had worked a lifetime for stripped away in the blink of an eye.

Collateral Persecution: What will it need to destroy in your life before you admit it is a threat to us all?