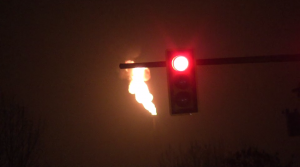 Utah 4PS editor Jesse Fruhwirth was detained recently while gathering footage for a project about deadly tar sands pollution coming from oil refineries in my neighborhood. Even though I felt weird doing it, I filed a complaint with SLCPD internal affairs and the civilian review board because I’m quite sure this will be the easiest way to gather more information about the relationship between the police and toxic polluters. Open-records laws can’t force police to “create” records that don’t already exist; but a complaint from a victim of police misconduct maybe can (at least that’s what we’re banking on).

Below is the complaint submitted to the Civilian Review Board via their online submission tool.

Officer “Kilo 85” detained me with absolutely no reason to suspect that I was violating any law. It was an illegal detention, and thus a kidnapping as defined in 76-5-301(1)(a).

Kilo 85 could see that I had a camcorder on a tripod and was pointing it at the Tesoro refinery—which is all completely legal activity. There was no obstructed view between she and I. Additionally, I immediately communicated with her about what I was doing and my intention to record the pollution. So there was no room for confusion about what I was doing and that my conduct was legal. In the first 5 minutes of speaking with her, I refused to answer questions and, despite having no articulable suspicion of any criminal activity, Kilo 85 detained me for the next 20 minutes.

The refinery was black and dark except for giant plumes of toxic fire billowing from the smoke stacks. This major pollution event was due to a power outage and occurs every time and power outage occurs. This super dose of toxic poison represents a very toxic and potentially deadly presence for our community. Readings of NO2—a toxic air pollutant that comes from refineries—measurably and noticeably spiked on the Div. of Air Quality’s trend charts.

While being detained, the power began to come back and the giant plumes of fire dousing the neighborhood in pollutants had receded, which is exactly as Kilo 85’s employer at Tesoro wants it.

I was kidnapped. This cop committed a second-degree felony of kidnapping.

In doing so, my 1st, 4th, and 5th Amendment rights were trampled by this person. As a journalist, this officer trampled on the eyes, ears and voice of democracy, creating a chilling effect around news gatherers’ ability to cover stories related to refineries and major pollution events.

Additionally, Kilo 85 was abusing her power specifically and explicitly on behalf of Tesoro, the oil corporation. Kilo 85 says she was an off-duty SLCPD cop working for Tesoro. As a journalist who is trying to expose the deadly role that Tesoro plays in our community, I find it particularly noxious that Kilo 85 is using public resources to harass one of Tesoro’s victims—me—while protecting the entity that is harming so many people.

This incident was submitted to Internal Affairs on January 20. I’m awaiting a call-back from a sergeant.