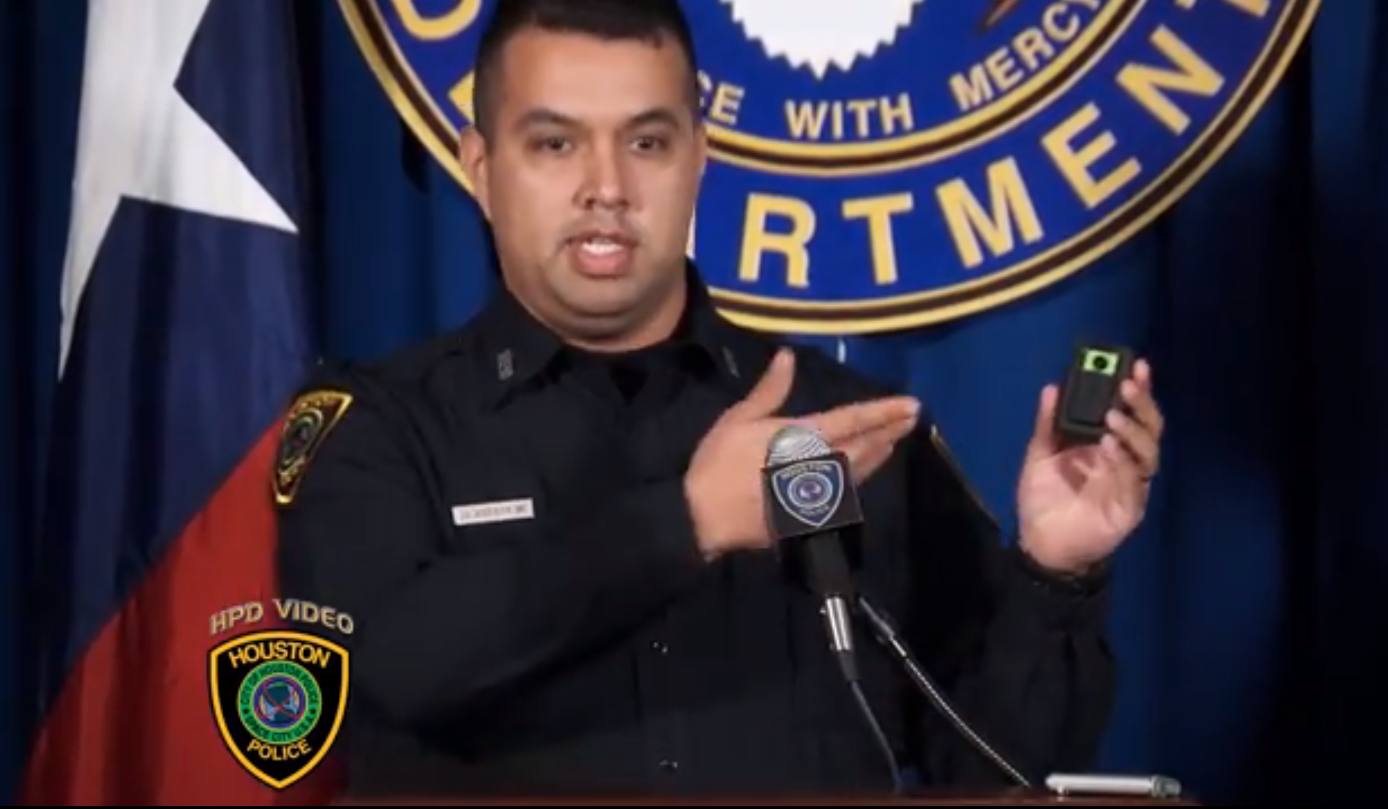 Over the past few weeks 100 Houston police employees have been given wearable body cameras. The head of their outfit – Charles McClelland – said that, “in trying to be accountable to the public, and being open and transparent, we’re very excited about this” and listed as benefits a lessening of citizen complaints, more convictions in court, better attitudes adjusted on both sides of the camera, and an officer safety enhancement as the video can be used for training purposes. But are body cams a step in the right direction or just the latest attempt to try to maintain authority?

As 90% of police interactions happen away from the area captured by dash cams, McClelland noted that that these body cams will make moot that need. The cost cited for each unit is $2,500 per ($850-1000 for the camera and the rest for storage capacity). Each device can record video and audio for four hours  and the data is kept on police servers for 90 days unless needed for court.

But just how easy will it be to obtain that footage? For example, suppose someone claims their rights were violated – will the recording be made public immediately? Will it necessitate a FOIA request? Will it be guarded or go missing? If McClelland and his crew wanted to save taxpayer money and maximize transparency why not upload all raw footage to their existing YouTube channel? Or perhaps make new YouTube channels for each patrol division and have a standard naming convention (ie date-time-badgenumber-videoclip)?

The new deployment of body cams are discussed in the first 6:30 of video:

McClelland did add that he believes these body cams are “the trend in the industry … in just a number of years all police officers across this country will be wearing some form of audio, video recording devices.” Earlier this year a judge mandated that body cams be donned by New York police employees who work out of the precinct in each of the five boroughs that most often utilized ‘stop and frisk’ shakedowns. And three years back, the Oakland police outfit spent over half a million dollars on body cams and instructed its agents to record if directly engaged with a crowd. Though it’s not been uncommon for police employees to fail (forget? neglect?) to do so.

Are body cams the answer for a more accountable police force? Are they worth investing resources into pursuing or will it be business as usual?

Me personally, I don’t think it worthwhile to put efforts into encouraging the adoption of body-worn cameras by police employees as it means time isn’t then being used to advocate for the ideal – that the provision of protection be provided via consensual interactions. A parallel to this line of thinking is that instead of working to try to pass ‘better’ legislation, one can create a better reality by simply living free oneself (and/or creating civil society mechanisms for those in ones sphere/community).

Those body cams are paid for with money stolen from area residents by people who claim to ‘protect and serve’ – that alone speaks to the perverse incentives inherent in their coercive monopoly. Would you advocate that employees at your grocery store steal your money and your neighbors money to wear cameras to help make sure they brutalize you or violate your rights? Of course not – you know, were one of those grocery store employees to initiate force, they’d be held accountable and it’d have a significant, negative impact for that business.

The same accountability mechanisms are absent with today’s policing model. The cameras are at most, the latest band-aid to try to maintain legitimacy for what’s inherently a faulty institution. That’s not to diminish the impact had by filming the police, but assuredly there is a world of difference in who controls the content.