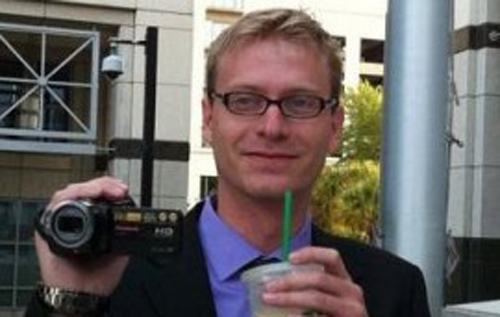 Please join us in letting others know that we will not condone innocent people being sent to prison as political targets.

If you’re within driving distance of Orlando please consider supporting activist John Kurtz next Monday at Orange County Courthouse. If you’re outside the area please take a moment to call the Orlando PD (321) 235.5300. Ask to speak to officer Adam Gruler and tell him that he’s in the wrong – that badges don’t grant him extra rights nor exonerate his actions.

When: Monday May 16th, 2011 8:30 AM
Where: Orange County Court House: 415 North Orange Ave, Orlando, FL 32801
What: Please stand in unity as Liberty activist John Kurtz stands Trial. Facing a maximum sentence of 6 years in Prison on the allegations of battery on a LEO, Obstruction of a Police officer, and resisting arrest without violence, Kurtz adamantly proclaims his innocence and that he is a political target because of his involvement with OrlandoCopwatch.com and other activism. Please bring signs, hand outs, alert the media, tell your friends. The people must know about this persecution of a political dissident.
Facebook Event: Trial of john Kurtz, Facing 6 Years in Prison for Video Taping Police

Ademo and I had the pleasure of meeting John last fall just after Liberty On Tour: 2010 concluded – he’s stand-up guy who does excellent work and someone we both consider a friend. John hasn’t harmed any person nor property yet he’s being threatened with six years in a cage due to the double-standards and unaccountability of one person who happens to wear a badge – Adam Gruler.

John founded OrlandoCopwatch.com and is very active with Fully Informed Jury Association outreach. The threats levied on John stem from an incident in which John was filming an individual being aggressed upon by someone wearing a badge. He was trying to help someone else and he himself became the latest to witness the violence of those who claim a “legitimate” right to use force. The Facts:
Just before 2 AM on January 1st, 2011 John Kurtz left a private party on Orange Avenue and Church Street, downtown Orlando to investigate some apparent police activity on Church Street.

Kurtz approached the scene and videotaped the incident, which included the use of tasers, a violent take down, and a pepper spraying AFTER the suspect was subdued and in handcuffs.

Officer Adam Gruler repeatedly told Kurtz to go away and turn off the camera. When Kurtz informed Gruler that he knew his rights and wasn’t going anywhere, Gruler violently took Kurtz to the ground and arrested him.

Kurtz’s video camera with the evidence on it that would easily clear or condemn him of these charges mysteriously went missing. It was not in Kurtz’s personal effects when he was released from jail, nor was it entered into evidence. It is unknown what happened to Kurtz’s camera.  However, at best it reflects negligence on the Orlando Police Department for failure to secure evidence; at worst it shows absolute corruption and evidence tampering.

John Kurtz is a peaceful person who adheres and promotes the non aggression principle. Kurtz is known by his friends as a pacifist who is much more likely to turn the other cheek, than to retaliate with violence.

This post made possible by FreeExistence.org, which provides tips on filing complaints against cops, fighting speeding tickets, libertarian plumbing, and more!