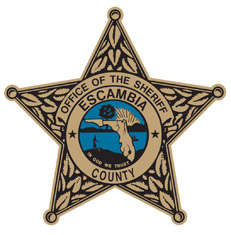 On Monday July 2, 2013, I called Escambia Co. Sheriff’s Office, spoke with Sgt. Weston, and advised him I was looking for a police report for an incident that occurred on July 1st in the early hours involving my son, a Navy sailor stationed at NAS Pensacola. My son advised me that he was handcuffed by Sgt. Nix and Officer White and placed in their patrol car after they ordered him off of the boardwalk at Pensacola Beach when my son asked a question concerning why they had grabbed his friend for no apparent reason. My son walked away, and more than halfway down the boardwalk, as he was walking to the parking lot, he flipped a bird up in the air following the officers’ profanity-laced tirade, but did not say anything back to them. The officers chased after him, grabbed him, handcuffed him and placed him in the car while my son calmly asked what they were charging him with and doesn’t he have first amendment rights of freedom of expression. They said, “No, being in the military, you don’t.” (Lucky guess he was in the military, with a short haircut.)

I wanted the police report or incident report describing the incident and the transport while handcuffed to the Navy Base. After all, without probable cause, police cannot handcuff a person nor transport them against their will without it being a violation of the 4th Amendment prohibiting unlawful search and seizure.

Sgt. Weston advised that Sgt. Nix works evenings and was not there at the time. He advised that Sgt. Nix works extra overtime detail at Pensacola Beach and is there frequently. He stated that he would send Sgt. Nix an email to contact me because since he wasn’t there at the time of the incident, it was best that I speak with Sgt. Nix who was there. Sgt. Nix is also the supervisor of Officer Shawn White who initiated the “arrest/detainment” of which there is no record. I was advised that he did not see a police report or an incident report of the police encounter and therefore, there was no record of it.

On Thursday, July 5th, Sgt. Nix called and stated that [my son] was a suspect in a crime, so there was probable cause to make an arrest. I asked, “What crime?” He stated obstruction. I asked what he was obstructing. He said he was obstructing an ongoing investigation in which an arrest was made. My son’s friend on the boardwalk was not arrested and my son was walking away down the boardwalk to the parking lot. Two others from his base were arrested after he was taken to the base in a “courtesy transport.” They likely balked at the false arrest and were subsequently arrested for trespass (in a public parking lot). When I stated there was no arrest made on the boardwalk and the two arrests were subsequent to the arrest of my son, he stated, “Why don’t I just get an arrest warrant right now on [your son] so everybody’s happy, because evidently you are not happy with the courtesy turnover.”

I stated that one cannot handcuff and transport without probable cause for arrest. He stated he did have PC and he can get a judge to sign off on a warrant and have [my son] picked up right now. I asked, “Eight days after the incident?” He stated, “We are well within the time-frame to get a warrant.” He said that incidents like this, of doing a favor and doing a courtesy turnover and then someone calling about it, this is why officers are seen as assholes when they are trying to do a favor. All you are doing by calling is making them consider next time in a situation like this to stop courtesy turnovers and make the military deal with civilian charges. Although Nix stated they act as “shore patrol, if you will” to help service members avoid civilian charges by conducting a courtesy turnover to the base, I found no evidence that there is a formal agreement between the base commanders and the Escambia County Sheriffs Office allowing these civilian officers to act as military police. In fact, they are violating the US Constitution as well as Florida State law.

Later the same day that I spoke with Sgt. Nix, my son advised that he was called into his Chief’s office due to Sgt. Nix of ESCO calling the top enlisted man at the Hospital NAS where he worked. The Chief stated that if he [my son] does not drop it and have [his mother] back off Sgt. Nix, he will have all the courtesy turnovers stopped and there will be civilian arrests in every case because of him. Needless to say, I filed a complaint with ESCO again, on Sgt. Nix regarding his unprofessional conduct, his profanity, his threats of arrest and interference with my son’s employment. He made threats to arrest my son if I did not stop inquiring about the events of July 1 at Pensacola Beach Boardwalk and also called the Chief at his job. I received a certified letter from a Lieutenant Walter Matthews of Internal Affairs that stated the complaint was investigated and concluded, and based on Lieutenant Eddins’ investigation, Sgt. Nix and Deputy White were exonerated and their actions were lawful and proper.

Well, I am not surprised at the outcome. But now that my son is no longer stationed there under the threat of his Command Master Chief at the hospital, who by the way is personal friends with Sgt. Nix, we shall proceed with further action against these corrupt individuals: Sergeant Philip Christopher Nix, age 45, and Officer/Deputy Shawn White (who was formerly in the Army and despises military members).