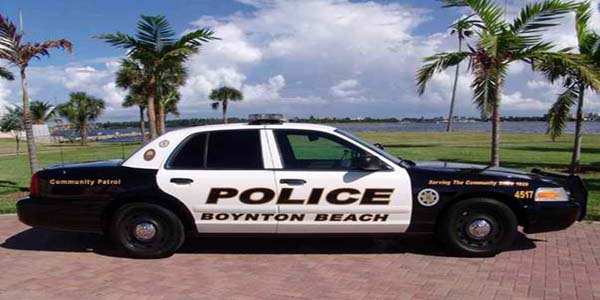 I have written before about fired cops having little trouble finding new jobs as police officers.  Sometimes they are hired by other departments, other times the same police department is forced to rehire the officer due to the decision of an arbitrator or by a judge. Either way, fired then rehired cops often continue to be the thugs they were before being fired.

Boynton Beach Florida Police Officer, David L. Coffey, was arrested and charged with improper exhibition of a dangerous weapon or firearm and culpable negligence after he sneaked up behind a fellow officer and activated his taser just inches from her ear to get back at her for honking her horn at him in the parking garage. His victim, Officer Rachel Loy, is now being treated for hearing loss because of the incident.

This was not Officer Coffey’s first misuse of a taser. He was fired in 2007 for attacking a suspected drunk driver in a holding cell and then tasering him four times while the man was in handcuffs.  Not only was Coffey not charged with assault in that case, but because an arbitrator decided he should be rehired, Boynton Beach was forced to give him his job back in 2008.  Bureaucrat-on-serf violence was not enough to cost him his badge, but maybe bureaucrat-on-bureaucrat violence will be.  He is now on paid vacation pending an internal investigation into this latest incident.

Lindal Hairston of the Gary Indiana Police Department fought for several years to get his job back after being fired in 2003 for an off-duty altercation in which he threatened a teenager with a gun.  The city settled the lawsuit Hairston filed against them a year ago, by not only rehiring him, but PROMOTING him to Sargent.  This promotion was awarded to him despite the fact that he never had to take the tests or go through the other processes usually required for such a promotion.  Now Hairston is accused of losing his cool once again, this time while on duty.

Russell Thomas, 50, who owns Prestige night club on Broadway, claims Hairston struck him in the head after handcuffing him, then swore at him and threatened him as he took him to the police station. A verified complaint submitted to the Gary Police Civil Service Commission charges Hairston with violating seven commission rules, one city ordinance and one state law. Charges include willful mistreatment, making a false report, mishandling evidence, neglect of duty and failure to comply with a proper order from a superior officer.The commission accepted the complaint at its meeting Thursday and will assign a hearing officer to preside over the disciplinary matter and make a recommendation on what action the board should take.

Before being hire as a deputy for the Rio Arriba County Sheriff’s Office in New Mexico, Algin Mendez, was fired from the New Mexico State Police Department in 2010 for refusing to take a report from a victim of domestic violence.  Now Mendez is once again in trouble, this time for his off-duty conduct.  Mendez has been wreaking havoc at the Buffalo Thunder Resort and Casino in Pojoaque, New Mexico.  According to KRQE 13,  Mendez “has started at least one fight, intimidated citizens and security guards and exhibited drunk and disorderly behavior”, much of which has been caught on surveillance video.

Of course the arbitrators or the judges that force police departments to rehire bad cops have no personal liability if and when these officers hurt someone once they are back on the job.  Even the Police Chiefs or Sheriffs who decide to hire officers that were fired from another department have little to lose.  Sure their departments may have to pay out a lawsuit to that officer’s next victim, but when they use funds taken from the public, there is little incentive for them to be more discriminating in their hiring practices.  As long as as we have monopoly police services, we can expect more of the same.