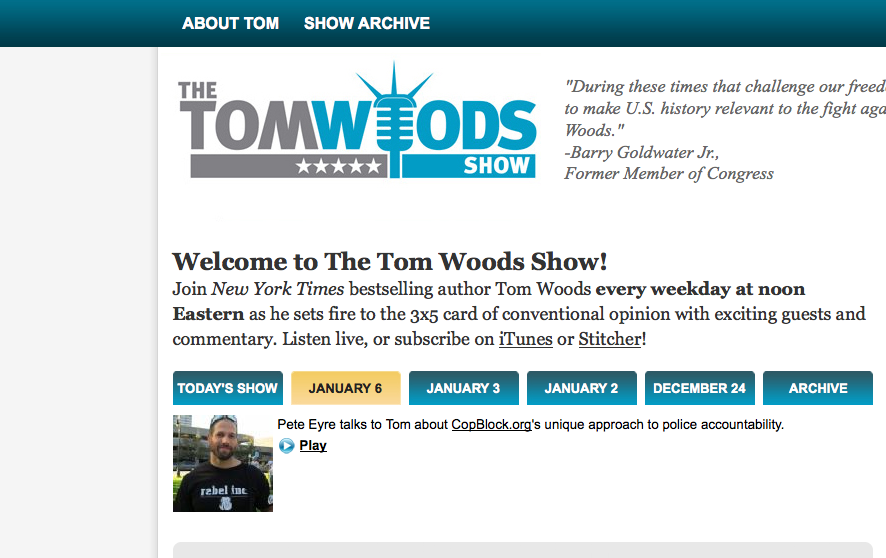 Yesterday, January 6th, 2014, I had the pleasure to join Tom Woods on his radio show – the aptly named Tom Woods Show. The segment is about 30-minutes long, with our conversation staring around the 5-minutes mark.

But be sure to listen to the first five-minutes – especially if you’re a “thinking person,” to learn about Liberty Classroom, as that content will almost assuredly differ in perspective and logic than that communicated to you in government schools.

We covered some ground – background and aims of CopBlock.org, the use of a camera as a tool for accountability, the importance for us advocates of non-aggression to connect and look out for each other, and, to strike the root – to not buy into the fiction that a coercive monopoly can ever provide justice or protection.

Tom is a great guy – on-point and an excellent communicator. I’m glad he’s out there doing his thing, and I feel fortunate to have been a guest on his show.

Thomas E. Woods, Jr., is a senior fellow of the Ludwig von Mises Institute and creator of Tom Woods’s Liberty Classroom. He holds a bachelor’s degree in history from Harvard and his master’s, M.Phil., and Ph.D. from Columbia University. Woods has appeared on CNBC, MSNBC, FOX News Channel, FOX Business Network, C-SPAN, and Bloomberg Television, among other outlets, and has been a guest on hundreds of radio programs, including National Public Radio, the Dennis Miller Show, the Michael Reagan Show, the Dennis Prager Show, and the Michael Medved Show. He is a regular fill-in host on The Peter Schiff Show.

Woods is the author of eleven books, most recently Rollback: Repealing Big Government Before the Coming Fiscal Collapse and Nullification: How to Resist Federal Tyranny in the 21st Century. His other books include the New York Times bestsellers Meltdown: A Free-Market Look at Why the Stock Market Collapsed, the Economy Tanked, and Government Bailouts Will Make Things Worse (read Ron Paul’s foreword) and The Politically Incorrect Guide to American History, as well as Who Killed the Constitution? The Fate of American Liberty from World War I to Barack Obama (with Kevin R.C. Gutzman), Sacred Then and Sacred Now: The Return of the Old Latin Mass, 33 Questions About American History You’re Not Supposed to Ask, How the Catholic Church Built Western Civilization, and The Church and the Market: A Catholic Defense of the Free Economy. His critically acclaimed 2004 book The Church Confronts Modernity was recently released in paperback by Columbia University Press. A collection of Woods’ essays, called W obronie zdrowego rozsadku, was released exclusively in Polish in 2007. Woods’ books have been translated into Italian, Spanish, Polish, French, German, Czech, Portuguese, Croatian, Slovak, Russian, Korean, Japanese, and Chinese.

Oh and by the way – the mention by Tom at the end of the segment about having first crossed-paths through Motorhome Diaries – that was a project Ademo Freeman, Jason Talley and I were involved with, through which we interviewed liberty advocates of all strips over 21,000-miles in seven months. When traveled in a RV called MARV (the Mobile Authority Resistance Vehicle) and when we rolled through Auburn, AL we stopped by the Mises Institute, where Tom shared some thoughts about the Fed.