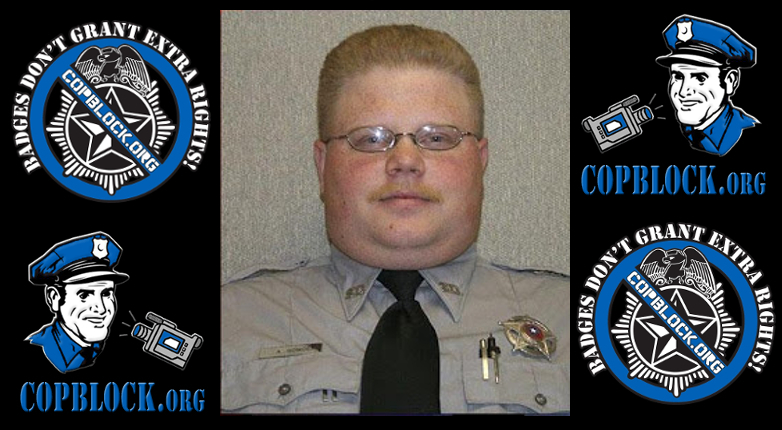 UPDATE: According to the Daily Mail, the murder charges against Henry Goedrich Magee have been dropped:

A Central Texas man who shot and killed a sheriff’s deputy entering his home will not be charged with capital murder, attorneys said Thursday.

A local grand jury declined Wednesday to indict Henry Goedrich Magee for the December death of Burleson County Sgt. Adam Sowders, who was part of a group of investigators executing a search warrant for Magee’s rural home.

Sowders and other officers entered the home about 90 miles northwest of Houston without knocking just before 6 a.m. Authorities were looking for guns and marijuana.

Magee’s attorney, Dick DeGuerin, said his client thought he was the victim of a home invasion, reached for a gun and opened fire.

DeGuerin has acknowledged his client had a small number of marijuana plants and seedlings, as well as guns he owned legally.

‘This was a terrible tragedy that a deputy sheriff was killed, but Hank Magee believed that he and his pregnant girlfriend were being robbed,’ DeGuerin said in an interview Thursday.

‘He did what a lot of people would have done,’ DeGuerin added. ‘He defended himself and his girlfriend and his home.’

The following post was shared with the CopBlock Network by Amber Eldridge, via the CopBlock.org submissions page. Along with her submission she states:

Hi, I am a close family friend of Henry (Hank) Goedrich Magee. He is currently being held in the Washington County Jail in Brenham, TX and charged with capital murder. HE is the victim of a botched no knock raid on his home. The deceased sheriff’s deputy that requested the no knock warrant received false information from someone he had recently arrested.

We are trying to get support and fight this with whatever we can; we have been researching and we are seeing that these no knock tragedies are happening all over the country. We are asking for any help/support we can get. He is a good man. We have created a support group and a blog page for updates and contact information.

He is a good person and does not deserve to be in jail right now. His story is eerily resembling the Matthew Stewart case, Cory Maye and so many others! Please help us; I’m reaching out to everyone we possibly can. Below are a few of the articles out now.

DALLAS (AP) — The attorney for a Central Texas man accused of killing a sheriff’s deputy says the man thought he was the victim of a home invasion when he opened fire.

Henry Goedrich Magee is accused of capital murder of a peace officer in the death of Sgt. Adam Sowders. The Burleson County Sheriff’s Office said Monday that investigators had found the semi-automatic rifle used to kill Sowders at Magee’s rural home near Somerville, about 90 miles northwest of Houston.

But Magee’s attorney, Dick DeGuerin, says sheriff’s deputies did not announce themselves when they entered Magee’s home just before 6 a.m. Thursday. DeGuerin says Magee opened fire without knowing that the person he shot was a sheriff’s deputy.

District Attorney Julie Renken declined to comment on specific allegations due to the investigation.

On December 19th, a sheriff’s deputy was shot and killed during an attempt to serve a “no knock” warrant near Sommerville, Texas. Just before 6:00 A.M. an 8 member SWAT team broke through the door of Henry Goedrich Magee to serve a warrant which would permit the team to search the mobile home in which Magee and his pregnant girlfriend were living. Reacting to the pre-dawn, forced entry Magee grabbed a rifle propped against a bedroom door frame and fired at the unidentified intruders, killing 31 year old sheriff’s deputy Adam Sowders. No one else was injured and Magee was taken into custody. He is being held on $1 million bail and has been charged with capital murder, punishable in Texas by life in prison without possibility of parole or death by lethal injection.

These are the broad facts of the case as first reported by a number of print, radio and TV sources. The following additional information has been made public during the past few days:

1.) The “no-knock” warrant was issued at the request of Deputy Sowders who was proceeding according to information provided by an investigator who told the officer that Magee “…was growing marijuana and possibly had stolen guns, as well as other drugs inside his home.” According to Magee’s attorney, Dick Deguerin, four weapons were recovered by police; 3 legally owned by Magee, one legally owned by Magee’s mother. Also according to Deguerin, the only drugs found in the home consisted of a small number of marijuana plants, constituting “…a misdemeanor amount.” The warrant itself was signed by District Judge Reva Towslee Corbett. As a copy has yet to be made available, it’s not known whether the warrant was for a drug search only or also for a search for firearms.

2.) According to the AP, “Magee has been arrested twice for driving while intoxicated and twice for possession of marijuana.” The Bryan-College Station Eagle writes that Magee “has a felony and misdemeanor drug conviction.”  According to Texas law, a resident with a felony arrest may own a weapon IF 5 years have elapsed since the felony conviction or end of parole. The weapon must be kept at the individuals home. None of the sources make it clear if this statute applies to Magee.

3.) Speaking for his client, Deguerin told the media that Magee and his girlfriend were awakened by the sound of “explosives” which seemed to be going off near the front windows and a loud banging on the front door. Magee claims he did not know that law enforcement officers were responsible for the noise or the break in.

4.) A spokesman for the Burleson County Sheriff’s Office said she “…did not know if or how deputies announced their entrance into the home.” None of the deputies were wearing body cameras and it is unknown if dashboard cameras on police vehicles were operating.
It’s a safe bet that a mountain of additional information will be forthcoming should Magee stand trial. But based upon the information that has been released, should Henry Magee have been charged with capital murder? In fact, should he face a murder charge of any kind? IF the SWAT team (as it was called by Texas Ranger Andres de la Garza) entered without identifying its members as law enforcement officers, did Magee have an absolute right to shoot, given that he feared for his life, that of his girlfried and of their child? Must officers accept any risk which goes along with the serving of a “no knock” warrant, the purpose of which is to confuse, intimidate and catch suspected criminals off guard?

It is perhaps a tragic irony that Deputy Sowders himself requested Judge Corbett issue the no knock warrant which might have contributed to his death. With prior arrests for drunk driving and possession of marijuana, it’s difficult to imagine that such a warrant would have been issued at all. Assuming Magee was not engaged in criminal activity as yet unreported, shouldn’t SWAT team tactics be reserved for individuals with far more extensive records, or suspected of more serious offenses?

Countless articles have recently been written about the “Militarization” of police departments across the U.S. If police are preparing for “war” against the American public, it seems likely that shoot-outs between citizens and officers could become all to common.

Although Sowders was killed early last Thursday morning, we delayed reporting the story because the sheriff’s department refused for several days to release search warrant information that would have verified it was indeed a drug-related search warrant.

According to the Bryan-College Station Eagle, Sowders had obtained a search warrant for the residence after obtaining information that the homeowner was growing marijuana and possibly had stolen guns. The warrant was a “no-knock” warrant, meaning police could forcibly enter the residence without giving residents a chance to respond.

Sowders, the first officer through the door, was shot and killed by homeowner Henry Goedrich Magee, 28, who has now been charged with capital murder. But Magee’s attorney, famed Houston defense lawyer Dick DeGuerin, said Magee and his pregnant girlfriend were sleeping in the home when they heard “explosives” going off and loud pounding at the door. Moments later, the door burst open and a person Magee couldn’t identify entered the residence. Magee grabbed a rifle leaning against his bedroom door frame and shot Sowders. According to DeGuerin, Magee shot him because he “believed the man rushing in was an intruder and he needed to defend himself.”

Magee has a felony and a misdemeanor drug conviction, but DeGuerin said all investigators found inside the trailer were a few marijuana plants and four guns that were all legal. DeGuerin pointed at the no-knock warrant as a contributing factor in Sowder’s death.

“The danger is that if you’re sitting in your home and it’s pitch black outside and your door gets busted in without warning, what the hell are you supposed to do?” DeGuerin said.