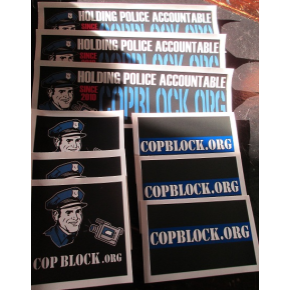 I’ve recently had some conversations about CopBlock.org bumper stickers (furnished by LibertyStickers.com) and thought it might make for an interesting blog post. I am by no means trying to shamelessly sell you CopBlock.org stickers (though if you want them simply click here); in fact, my advice below is universal for all liberty minded messages. I’m a huge advocate of using swag to spread the message. That being said, let’s get to the point.

I have heard many people say (something to this effect), “I’d put a CopBlock.org bumper sticker on my car but I don’t want the police messing with me.” Understandable. Who really wants the police messing with them? I know I don’t. Yet, that mentality has come from what everyone understands a police interaction to be – a very unpleasant encounter, one that can cost you time, money and even your life. People are willing to go to great lengths to do anything they can to avoid an interaction with police.  Some buy radar detectors, others obey traffic laws to a ‘T’ and some would say they don’t put bumper stickers on their cars.

So why SHOULD you put a CopBlock.org bumper sticker on your car?

That’s simple, because, I believe, it will keep you safe(r).

Just imagine you’re driving down the road, as a LEO, and you’re tailing a car with a CopBlock.org bumper sticker. What would you be thinking as this officer? Even if you’ve seen them break a minor traffic law, you might not want to bother with the possible (but highly likely) video recording, questioning and, at times, lengthy court trial that is common with CopBlocker interactions. You might even think it was a set up (though I’ve yet to hear of a CopBlocker who actually went out to “set up” the police – just Barry Cooper, from CopBusters) as many officer comments at Cop Block suggest not taking ‘our bait.’

I know that in New Hampshire, especially the Keene and Manchester areas, a CopBlock.org bumper sticker has lead to the occupiers of said cars being given what they believed were ‘passes’ on a stop. What that means is that the officer did  the usual things, like making a U-turn in the roadway and tailing the car, before pulling someone over; yet, when the cruiser got closer it suddenly backed off and did not pull them over.

Of course there is no guarantee on anything and you could find that one cop that really wants to pull over, and arrest, a CopBlocker (or supporter). I still believe that having the sticker on your car is better than ‘hoping’ to fly under their radar, especially if you’re prepared to record the encounter, ask questions of the officer(s), and  share your story via CopBlock.org.