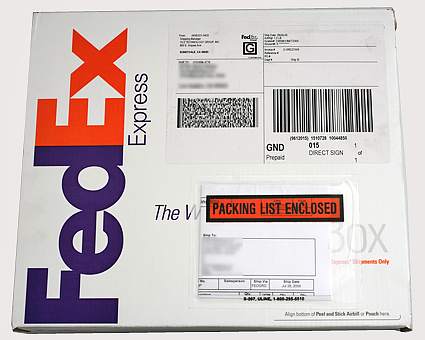 Hey there. Let me first say that I love what you guys do. It’s nice to see someone is watching law enforcement. I doubt you’d care much about this, but I thought I would send you my story. Below is a letter that I’ve sent to all local media as well as my local ACLU chapter. I really feel like local drug task force agencies are violating our 4th amendment rights. Take a look and let me know what you think if you get a chance. I have more information about the detectives if needed. I’m just an older college student who is sick and tired of seeing our freedoms be encroached on. Thanks!

Hello,
I’m writing to you because of an unpleasant encounter I recently had with the local Drug Task Force. There was a knock at my door two days ago and waiting outside were three plain clothes detectives holding a package of mine from FedEx. These detectives never said they were from the Drug Task Force, but rather said they were looking for suspicious packages with all the “anthrax scares” and “potential bombs.” My package was deemed to be one of those “suspicious” packages that could be dangerous. I have the audio recording and written narrative from one of the detectives as I’m entitled to under Florida’s Open Information Act. However, that’s all the information I’ve been forwarded despite wanting all correspondence from exactly how this investigation began. Keep in mind that records had nothing on file about this incident. It took many phone calls up the chain of command to get the little bit of information I’ve received so far.

Back to the story: I attempted to grab and open my package, but was informed that they would rather do it since they are “covered on worker’s comp.” They were not there for fear of something dangerous. These three detectives were there to coerce me into opening my package in the hopes that drugs were inside so they could bust me. My immediate fear is that they are using the Patriot Act and the guise of public safety to really be conducting drug busts. I may be wrong, but all of this just seems very wrong.

After calling GPD records, I was transferred to the Special Crimes Unit of ASO, then back over to the Drug Task Force for GPD. No one had any information for my public information request. Why? I then was put in contact with a Detective Wilkins on the Drug Task Force who gave me contact information for a Corporal Plourd. When I attempted to contact Plourd by phone, the number was invalid, so I sent an email stating that no discussion was really necessary. I just want all information I’m entitled to including phone call conversations. Instead of a reply from Plourd, I then got a phone call from a Lt. Nechodom rather promptly. He had me call the records supervisor who also had no idea who I was because nothing was on record. Isn’t all of this supposed to be very well documented? He had me call the Communications Center that overlooks all departments to make sure I even had real detectives come to my home! It turned out that indeed they were real detectives and I was given a master inquiry number which I gave to the records supervisor. Again, all I was given was one written narrative from a detective who approached my home and the audio recording of that interaction.

Now, I’m not arguing that I didn’t give consent. I was never directly asked to give consent, but I gave it in a subtle way and I don’t have anything to hide. I question the legality of the whole thing. How can they snoop in our mail? After a lengthy call with the chief of security for FedEx as well as a phone call from the Lt. this morning, I learned that local law enforcement has a deal with package companies and specifically FedEx. FedEx allows Drug Task Force officers to come into their facilities to inspect packages and look for what they call “flags” – things that could indicate danger or drugs. My package came from a little old lady who makes hot sauces in California. I have a YouTube channel where I review hot sauces and eat the hottest peppers in the world, so it’s common for me to receive packages from all over the world. The only indicator I could see on my package was that it came from California, which is specifically what they look for in the HITDA (High Intensity Drug Trafficking Area) guidelines which they operate under.

I suppose as a man who strongly believes in our constitution and in this situation specifically the 4th amendment, what gives them the right to deem my package is dangerous? What gives them the right to inspect packages with no ongoing investigation and no case number or anything for me to track? Where is the paper trail and how is this legal? I want to know what the flags are, but of course they will not tell me their secret practices. The chief of security for FedEx told me that my package had three “flags” on it that he too would think suspicious. The only thing on the package is a slip from FedEx. Is the weight suspicious? The fact that no signature is required suspicious? It just feels incredibly wrong to me, but maybe it is I who am wrong. Basically, everyone’s packages are suspicious if they deem them so.

These are just some of my concerns and I thought I would share them with you. I strongly believe in protecting our freedoms and refuse to give them up under the disguise of public safety. Please let me know if you would like more information or if this at all interests you. I am continuing my investigation and am trying to speak to someone who understands the law better. If nothing else, I think the public needs to be made aware of what these law enforcement agencies are doing to try and get a bust.

Thanks for your time!