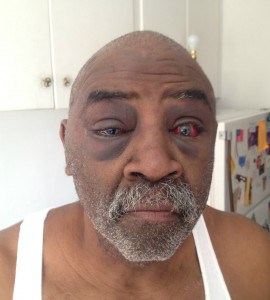 Who is Pearl Pearson? Pearl is a 64 year-old diabetic deaf driver who resides in the Oklahoma City area.

What’s the story? At this time, only limited details can be provided since this case is under investigation.

1. The Oklahoma Highway Patrol pulled Pearl over late in the evening on January 3, 2014. Pearl pulled over, as he should.

2. Pearl’s driver’s license indicates he is deaf. He also has a placard in his driver’s door that says, “Driver is deaf.”

3. Pearl pulled over and rolled down his window, expecting an officer to ask for his identification. An officer struck him in the face before Pearl had the chance to do anything. As you can see, he was struck multiple times.

4. An interpreter was never provided while Pearl was under the care of law enforcement – not during the booking, hospital, or time at the jail was an interpreter provided, even through Pearl requested one.

5. Pearl was left wondering “why” the the entire time. He has no clue why he was beat. Pearl and his family are still not sure, but are ready for some answers.

6. Pearl’s own son is a police officer, as was his son-in-law, who is now a deputy sheriff. He respects law enforcement and knows how to respond when pulled over. There is no reason for someone like Pearl to be hurt like this by those who are meant to protect and serve.

Our Oklahoma deaf community has often come together to help one of its members, and it’s time to do so again:

An elderly deaf Oklahoma man was beat by two highway patrol troopers earlier this month for allegedly refusing to comply during a traffic stop.

According to reports, 64-year-old Pearl Pearson left the scene of a minor automobile accident before being pulled over by Oklahoma Highway Patrol on January 3.

After issuing several vocal commands from their police vehicle, troopers claim Pearson refused to show his hands. Despite a large placard on his driver’s door stating, “Driver is deaf,” Pearson claims troopers immediately began hitting his face as he attempted to show his ID, which also states that he is hearing-impaired.

After a seven-minute altercation, Pearson was arrested and charged with resisting arrest and leaving the scene of an accident. According to Pearson, he was denied an interpreter for the entire duration of his detainment in and out of jail.

http://www.ohptroopers.com/index.html
Contact information for other OHP troops can be found here.