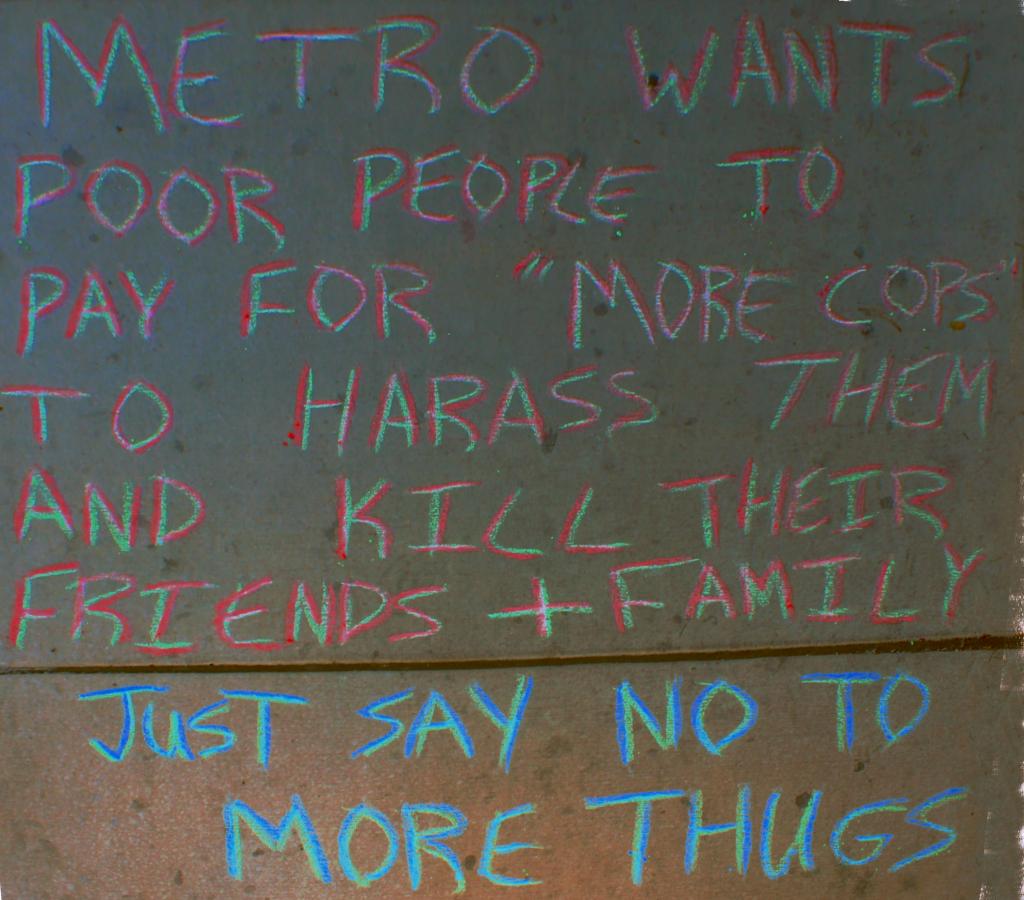 This is an editorial post originally published at NVCopBlock.org, addressing the continued attempts to pass the “More Cops” tax, which would increase the county sales tax in order to hire additional police within the Las Vegas area. Kelly W. Patterson shared this post via CopBlock.org’s submit page.

This was received via submission after originally being posted at the website of the Sunset Activist Collective.

Once again, Sheriff Gillespie and County Commissioner Tom Collins are trying to push the “More Cops” sales tax down the throats of the people of Las Vegas to fill the self-inflicted gaps in Metro’s already bloated budget and hire even more cops to harass and abuse the members of that very community.

Yet another sales tax is wrong from a practical standpoint in a time when the Las Vegas economy consistently ranks at or near the bottom in every financial category and most local residents are already just barely hanging on. By nature, sales taxes are regressive. Unlike wealthy people that have the capability of stashing most of their income in the bank, poor people generally have to spend most, if not all, of their money on the basic necessities of life. It’s not a coincidence that crime rates have increased as the economy has tanked. People that have little or no other options resort to whatever they have to do to survive. Taking even more from people that are already struggling just to keep their head above water is not the way to “take a bite out of crime.” It’s an unarguable fact that poverty leads to even more crime.

Beyond the basic economics, it’s wrong on an ethical level to expect poor residents to fund their own abuse at the hands of the LVMPD. People in poor and/or minority neighborhoods are routinely stopped, searched, abused, and humiliated by the police. In fact, Metro employs several “saturation units,” whose stated function is to descend upon certain neighborhoods en masse seeking any excuse they can to stop, interrogate, and arrest residents of that community. And those many, many abuses don’t end with harassment and wrongful arrests, either. The victims of police beatings and outright murder are predominantly members of the poor/ minority classes.

Not surprisingly, it has also been explicitly stated that these “select’ neighborhoods don’t include the ones in Summerlin. Many of the proponents of the “More Cops” tax increase are, in fact, residents of Summerlin and other wealthy neighborhoods, who have expressed the desire to have a cop in their neighborhood because it makes them feel safe. I have very little doubt that the residents of poor neighborhoods would have no qualms about letting them have some of the cops terrorizing their neighborhoods. They rarely make them feel safe, especially within the Las Vegas area, since there is absolutely no hope that any sort of accountability will ever be imposed upon the perpetrators of injustices against them.

Metro isn’t short on cops, they’re short on priorities. Anyone who has witnessed the massive East German style check point erected on Fremont St. every First Friday or the continual harassment of water vendors and buskers on the Strip, both of whom are just trying to earn a living during tough economic times, would have to question the claims of personnel shortages within the LVMPD. When you can afford to employ undercover cops to ensure tourists don’t have the chance to buy water at a cheaper price than the casinos sell it, then maybe you have a few people to spare for other things. Perhaps those plain clothes cops using official Metro vehicles to escort Zappos employees to their parking garage so they don’t have to look at poor people along the way, could be better utilized, as well.

Gillespie and the rest of his mafia dons have expended their budget on raises for an already overpaid police force, shiny new headquarters buildings that they insisted on pushing forward with in the middle of the worst recession in history, and million dollar settlements to the victims of their abuses and murders. Now they want the poorest people within this community to bail them out so that they can hire more cops even while absolutely refusing to do anything to hold them responsible for the crimes they continue to commit against their own neighbors and families.

Just say NO to more thugs!