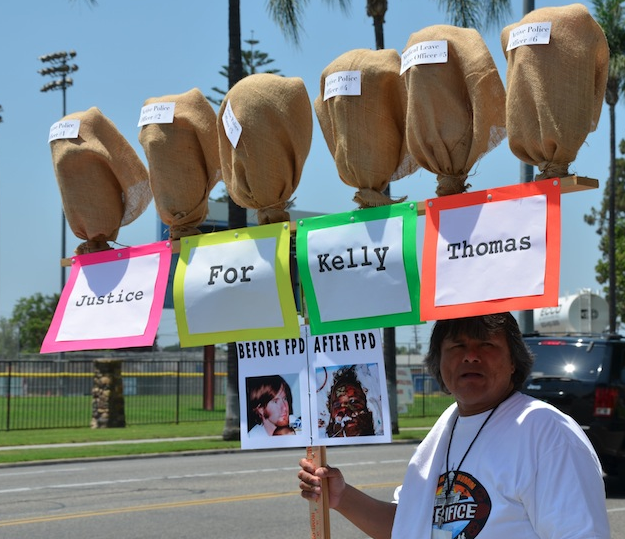 Truth is not only violated by falsehood; it may be equally outraged by silence.
– Henri Frederic Amiel

A week ago today, Manny Ramos and Jay Cicinelli – two of those responsible for the killing of Kelly Thomas – were said to be “not guilty.” Vocal outrage and disbelief came from all corners – except for the police community. Why?

I am not so calloused or naive to propose that all police employees believe the verdict just. So why then, haven’t we heard from anyone in that community? Why has not a single police employee publicly said what everyone else knows to be true – that Ramos and Cicinelli, along with Joe Wolfe, Kenton Hampton, James Blatney, and a sixth person employed by Fullerton police – acted in the wrong on July 5th, 2011?

A couple weeks back I spoke on the phone with a police employee who had previously emailed Cop Block. We gave each other ample time to expand on views, though we obviously came from different place and reached different conclusions in some areas and overall I thought it a good conversation.

One thing he pointed out that he thought was a bit disingenuous (he didn’t use that word but I think it best encapsulates his stance) related to an action depicted in many of the videos uploaded to the site –  the practice of myself or others approaching police employees and asking them their thoughts on a certain topic, such as the targeting of people for victimless actions. He stated that police employees were hamstrung to share their own thoughts per departmental policy. Police employees – he noted – are told to let the higher-ups or the “public information officer” speak for them.

Shortly after the Kelly Thomas verdict, a friend involved with a Cop Block offshoot suggested that she and some in her sphere go to the local police outfit and inquire of those present of their thoughts on the ruling. I thought it a good idea, but then was reminded of my conversation with the police employee, and thought about possible scenarios. Most-likely those police employees approached would opt not to be too talkative and would give a response of “I can’t talk about that” or “I don’t have an opinion” or another non-committal statement. But police employees aren’t robots – they each have their own thoughts and opinions. That should not be forgotten, not by those of us working to share the fact that badges don’t grant extra rights, or by police employees themselves.

To be clear, if police employees were asked their thoughts on the death of Kelly Thomas and the lack of accountability thus far, no matter their response, the question would be in their mind, and in their thoughts, which clearly is of value. They would, on some level, think about it. If they were asked their thoughts on the subject by a second or third person when on the street, or in a meeting, or by their spouse or child, it’d likely have an even more significant impact. If we who are not police employees choose not to ask police employees their thoughts on the death of Kelly Thomas or any other number of unjust situations, then the gulf that some perceive between police and non-police, can only grow, which is to the detriment of those in both camps (but not to those who rely on division to continue their control of others).

To choose not to engage with police employees based on the assumption that every single police employee will remain mute, and uncaring, isn’t ideal. If questions aren’t asked, it becomes easier for such behavior to be deemed acceptable. If questions are asked of police employees – especially of those personally responsible and of their colleagues, and the answers arrived-at don’t sit well with them, it’s more likely they’ll have to address that inconsistency – perhaps by joining Oathkeepers, or sharing thoughts under a pseudonym, or by sharing information with those outside their police outfit working for police accountability, and later by taking a public stand.

After the police employee with whom I spoke on the phone laid-out that police employees were prohibited from responding questions about their opinions, my response to him was to think about the larger implications of that model. Most police employees, whether working for a department of a few dozen or a few thousand, let a handful others speak for them. What if the state attorney general – supposedly the highest law enforcement employee within that arbitrary political boundary – decreed that police brass and “public information officers” no longer had the right to issue statements publicly, that all such quotes had to go through him and his office? Or if a decree came down from those clowns in DC that said statements to the public or media had to first be approved by the head of the nearby fusion center?

Would either of those scenarios cause police employees to speak out? At what point is the disconnect between the person, the individual actor, and their handler, thought to be too much? Where exactly is the line, before those of you employed to “protect and serve” would speak out against wrongs you see? That is my question to you.

At what point would you choose to speak according to your conscience? You’re not a cog in a machine. By continuing to “just obey orders” you help to set the stage for widespread rights-violations. People are seeing this, and are starting to act. Things would be a lot better – for yourself and future generations – if you didn’t remain silent.