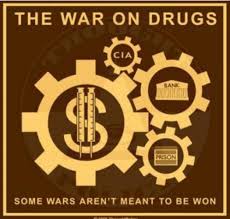 I wholeheartedly believe that most – like 90% – of the issues facing policing today (like double standards and lack of accountability to name two) will continue because the only real solution is to change the way the institution of protection is funded. Currently, that’s via taxation and, sadly, people believe they have to pay their taxes, or do so out of fear of being jailed for not paying taxes.

Below is a story that highlights how I believe we can actually change the profession of ‘protecting and serving.’ I’ve long stated that nothing will change with police until you provide those who currently work within the system an alternative. It was one of the points I was trying to get across during my “Ask Me Anything” on Reddit this past weekend.

In the story below, former DEA agent Patrick Moen states he quit his job with the DEA to work with a marijuana investment firm.  Hopefully this provides some of the LEO’s out there a little motivation to take their skills directly to those who need them. It seems Patrick is much happier helping people protect their property instead of being a part of an endless cycle that perpetuates endless violence.

The chief of operations at the United States Drug Enforcement Agency said only last week that increased efforts as of late to legalize marijuana across the country is scaring his fellow officials at the DEA. Others, however, have a much different take.

Just last Wednesday, the DEA’s James L. Capra told members of the Senate that the emerging pro-pot trend is “reckless,” “irresponsible” and “scares us.”

Former DEA agent Patrick Moen isn’t in the same boat. After over a decade of working with the federal government to put away drug dealers, Moen recently abandoned his job at the DEA in order to pursue a career with Privateer Holdings, a Seattle, Washington-based investment firm that specializes in the budding marijuana industry.

Since 2010, Privateer has been putting money into the hands of start-ups that are looking to work their way up in the legal weed business. Moen just recently left the DEA after more than 10 years, and since November has been Privateer’s managing director of compliance and their senior counsel.

“I saw this as an amazing opportunity to be a part of the team that’s helping to create this industry,”Moen, 36, told Reuters. “I don’t really feel like it’s the other side.”

Maybe Moen’s right, but there’s no doubt it’s something at least a little different for the long-time cop. According to his LinkedIn profile, he spent five-and-a-half years working as a law enforcement officer around Buffalo, New York, and then signed on for what became a decade as a DEA under the Department of Justice starting in 2003. Before calling it quits, he had managed to hold high-positioned jobs in both Washington and Oregon supervising teams of drug enforcement agents.

“Over the course of years I realized that the targeting of marijuana was not an effective use of resources. There was no ‘aha’ moment. It was a steady evolution involving discussions with friends and colleagues,”he told the Seattle Times last month.

Then, Moen told the paper, “the general dysfunction of the federal government” helped him consider new career options.

Here’s another guy (video below) who’s taking orders from customers and not politicians. I think more LEO’s will come around as the government goes further into debt, continues to put officers in more dangerous situations and as people in general lose faith in the system.