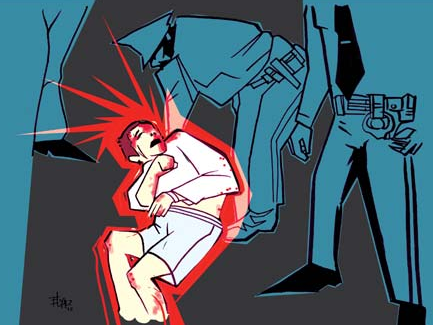 Not only is the number of complaints investigated startlingly low, it’s estimated that 70 percent who experience some form of police brutality never file a complaint.

by Katie Rucke
via MintPressNews.com

Only 1 percent of all complaints made against New Jersey police officers for using excessive force, among other types of police brutality, were deemed legitimate and investigated by internal review teams between 2008 and 2012, according to an investigation by a local newspaper.

The other 99 percent of complaints alleging brutality, bias and civil rights violations by officers at more than seven dozen police departments in central New Jersey during that five-year period were reportedly dismissed by internal review teams as being frivolous, lacking sufficient evidence, or in some cases the investigation was never closed, but the officers were still exonerated.

Since the national average is not much better — with just 8 percent of all police brutality complaints nationwide being investigated — many have begun to question whether police officers in the U.S. are ever held accountable for their actions.

Pete Eyre, of the organization Cop Block, which works to hold police accountable, told MintPress that while the percentage of complaints varies slightly between police departments, only a “miniscule amount” are ever investigated.

“The fact that almost all police complaints made are deemed ‘not sustained’ isn’t surprising,” since “Looking past stated veneer of accountability is a process of asking the friends of the aggressor to conclude that yes, they were indeed at fault.

“The incentive of those ‘investigating’ is to side with their colleagues. There’s no real negative consequence for that occurring and thus, it is the norm. Even if a community views their local police as largely being heavy-handed or corrupt, the police outfit – a coercive monopoly – can’t easily be fired in lieu of a better alternative,” Eyre said.

But South Brunswick Police Chief Raymond Hayducka, a former president of the New Jersey State Association of Chiefs of Police who has been called upon to provide expert testimony on police matters and worked on the revision to the state’s internal affairs guidelines, insists that “Agencies do a good job of self-policing.”

Representatives of Union County and Somerset Prosecutor’s Offices agreed, saying that there is nothing wrong with its policies, noting that investigations of police brutality are conducted when they are warranted — no more, no less.

But in a breakdown of each police departments’ police brutality complaints, the Central Jersey Courier News and Home News Tribune found that in many towns and cities not a single complaint was investigated.

In Elizabeth, N.J., for example, there were 203 recorded complaints in the five-year period and not one was found to be substantial. Similarly, Woodbridge, N.J., had 84 complaints, New Brunswick, had 81, Perth Amboy had 50 and Linden had 33.

Part of what is so surprising about some of these shockingly low rates of investigating claims of police brutality by New Jersey police officers is that there were low numbers across the board, including at some departments that have a notorious reputation for using excessive force.

However, there is a slight silver lining for those who complained against the unnamed officer,as he was later arrested on attempted murder and drug charges. During that investigation, lawyers said they found brass knuckles and a small club in his patrol bag, which are prohibited items.

Though Americans commonly believe law enforcement’s role in society is to protect them and ensure peace and stability within the community, the sad reality is that police departments are often more focused on enforcing laws, making arrests and issuing citations.

As MintPress previously reported, each year there are thousands of claims of police misconduct. According to the CATO Institute’s National Police Misconduct Reporting Project, in 2010 there were 4,861 unique reports of police misconduct involving 6,613 sworn officers and 6,826 alleged victims. Most of those allegations of police brutality involved officers who punched or hit victims with batons, but about one-quarter of the reported cases involved firearms or stun guns.

Mike Prysner, one of the local directors of the Los Angeles chapter for ANSWER — an advocacy group that asks the public to Act Now to Stop War and End Racism — told MintPress that the “epidemic” of police harassment and violence is a nationwide issue.

He said groups like ANSWER are trying to hold officers accountable for abuse of power. “[Police brutality] has been an issue for a very long time,” Prysner said, explaining that in May, 13 people were killed in Southern California by police.

Similarly, some citizens have taken it upon themselves to form volunteer police watch groups to prevent the so-called “Blue Code of Silence” effect from occurring, in the hope that police officers feel safe speaking out against misconduct occurring within their department.

While the New Jersey report has been eye-opening and shocking to the masses, unfortunately this is not the first time complaints against police officers have fallen upon deaf ears.

In 2001, the U.S. Department of Justice released a report on police use of force in 1999 and found that about 442,000 people over the age of 16 were thought to have experienced excessive force by a police officer or were threatened with the use of excessive force. And in 2006, the DOJ issued another report that found that of the almost 27,000 complaints about the use of excessive force by about 5 percent of all police departments in the U.S., only about 2,000 of those complaints were sustained.

As many law enforcement reform advocates point out, not only is the number of complaints investigated startlingly low, it’s estimated that 70 percent of people who experience some form of police brutality never file a complaint. Human Rights Watch says this is likely because the process of filing a complaint is often “unnecessarily difficult and often intimidating.”

Eyre says one way to ensure that a claim of police brutality is not just brushed aside by an internal review team is to make the situation public by posting video or audio of the incident on YouTube, their own site, police accountability websites or an alternative media news site.

“Especially when the testimonial is buttressed by objective documentation, such as video or audio of the incident,” Eyre said the police department will take notice, since “The court of public opinion is very powerful.

“Filming the police interaction is probably the best thing a person can do to safeguard themselves or another and to bring-about justice in the long run. Ultimately the authority of the police hinge on the the legitimacy granted them. If a person sees a pattern of rights-violations then they can choose to withdraw their consent.”

Eyre reminded MintPress that video recording the police (or anyone in public) is legal in all 50 states but says that audio recording sometimes requires “a heads-up.”

Although law enforcement reform advocates and law enforcement officials have cautioned the public to not solely look at the statistics before judging departments or officers, some such as Richard Rivera, a former corruption-busting cop from west New York who now leads the Civil Rights Protection Project of the Latino Leadership Alliance of New Jersey, said this is further proof internal affairs investigations should be available for the public.

Currently, almost all complaints against officers are kept confidential. The only information the public has access to is the number of complaints and whether they were investigated further.

While members of the public have the legal right to read synopses of all complaints where a fine or suspension of at least 10 days was assessed, the identities of officers, as well as the complainants, have to be redacted from these documents. Members of the public can’t even learn how an officer was reprimanded if the internal team found disciplinary action was necessary.

As Sergio Bichao wrote in his report for CentralJersey.com, “Police enjoy a level of workplace confidentiality not granted to private-sector professionals in the state, where complaints and disciplinary rulings against attorneys, plumbers, accountants and hairstylists, all identified by name, are posted on state websites.”

Democratic Assemblyman Peter Barnes III of Middlesex, N.J., believes that all internal affairs investigations of police officers should be handled by county prosecutors or the state Attorney General’s Office, saying “It’s long since past the day where you can say with a straight face that it’s OK to have officers investigate their own. It just isn’t a good system.”

Last year, Barnes authored a bill that would allow the state Attorney General to take over the Edison Police Department, which has reportedly been “rocked by a series of scandals, including allegations that internal affairs officers investigated political enemies of department leaders.” The bill stalled in the state Senate, but Barnes says he plans to push another law allowing the state to investigate police complaints later this month.

“Investigations should not be handled by the agency,” he said. “It should be handled by a larger, impartial bureaucracy,” so that finding the money to pay for such a system can be done if lawmakers believe the issue is “something legitimate that deserves proper focus.”

Rivera agreed with Barnes and said that “Police in general are incapable of investigating their own officers. They do not adequately analyze complaints or use of force incidents. They are woefully under-trained in investigating complaints related to excessive force.”

But Hayducka disagreed that the police departments were not capable of conducting proper investigations of officers’ behavior, and said Barnes’ proposed law has to balance officers’ privacy with the public’s right to know because “the general public doesn’t understand why we do certain things.”

The police chief said that the department receives a lot of complaints, such as a second car was called to a traffic stop or there were multiple officers that responded to a domestic violence call. He said that these complaints are a result of the public’s lack of understanding that there are certain protocols in place to protect the officers.

But Alexander Shalom, a senior staff attorney of the New Jersey chapter of the American Civil Liberties Union, says police agencies would benefit if they opened their internal investigation process, reasoning that if many of the complaints are frivolous like Hayducka says, then the public will be able to see that for themselves.