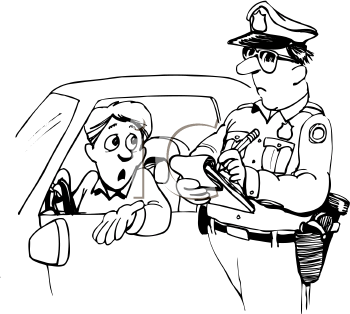 Unfortunately I couldn’t get my camera turned on fast enough to record this police interaction, and the fact that the officer refused to approach my car so I could actually see her face to face didn’t help. Instead she stood outside my window near the handle on the door, out of my line of sight, when she asked for my license, registration and insurance card.

This is what happened:

I was driving down the Edison bridge from NFM into FM; the speed limit on the bridge is 45 mph, and I was doing 50, like everyone else around me. As soon as I hit the bottom of the bridge, a group of cops just jumped out from behind a building after the first light and instructed me into their “detain point.” There was no cones or anything to indicate they were in this empty lot other than the several cops that were standing on sidewalks with radar guns. I followed their directions into the empty vacant lot. The police asked me “Do you have any idea why we pulled you over?” I replied with, “No clue, ma’am.” She then informed me that I was going 55 mph in a 35 mph. I thought to myself that I travel this route everyday, and the speed limit has never been 35 mph on this side of the bridge until you reach the 4-way stop ahead at the 41 and MLK intersection. I took her ticket of $253.00 and she let me go about my way.

316.183 Unlawful speed.—
(1) No person shall drive a vehicle on a highway at a speed greater than is reasonable and prudent under the conditions and having regard to the actual and potential hazards then existing. In every event, speed shall be controlled as may be necessary to avoid colliding with any person, vehicle, or other conveyance or object on or entering the highway in compliance with legal requirements and the duty of all persons to use due care.

(3) A school bus may not exceed the posted speed limits at any time.

(4) The driver of every vehicle shall, consistent with the requirements of subsection (1), drive at an appropriately reduced speed when:
(a) Approaching and crossing an intersection or railway grade crossing;
(b) Approaching and going around a curve;
(c) Approaching a hill crest;
(d) Traveling upon any narrow or winding roadway; and
(e) Any special hazard exists with respect to pedestrians or other traffic or by reason of weather or highway conditions.

(5) No person shall drive a motor vehicle at such a slow speed as to impede or block the normal and reasonable movement of traffic, except when reduced speed is necessary for safe operation or in compliance with law.

(6) No driver of a vehicle shall exceed the posted maximum speed limit in a work zone area.

(7) A violation of this section is a noncriminal traffic infraction, punishable as a moving violation as provided in chapter 318.

Now, not only is this illegal, to obscure yourself from traffic, but it’s also illegal to do it with unmarked cars. Also, I believe the road is LCSO jurisdiction, not FMPD. They broke the law they are supposedly upholding because they did not detain me, or arrest me, for going roughly 20 miles an hour over the speed limit, but what made it illegal to ticket me was that I was going with the flow of traffic, which means everyone else around me was going the same exact speed. To pull me over is profiling. Also, the ticket has not only the wrong statute on it, it has a statue that isn’t specific and does not exist. My car style is marked UT, and if you look to the right it says it’s not a companion car, which I thought was funny as my wife and kids were in the car.

Today I drove past this exact spot looking for speed limit signs and low and behold, they put up three speed limit signs one on the right side of the bridge, and unless you know it’s there, you do not see it. Also, the other two are on both sides of the road further down, and obstructed by foliage.

If you want to see the ticket, or what I am charged with, here is the info.