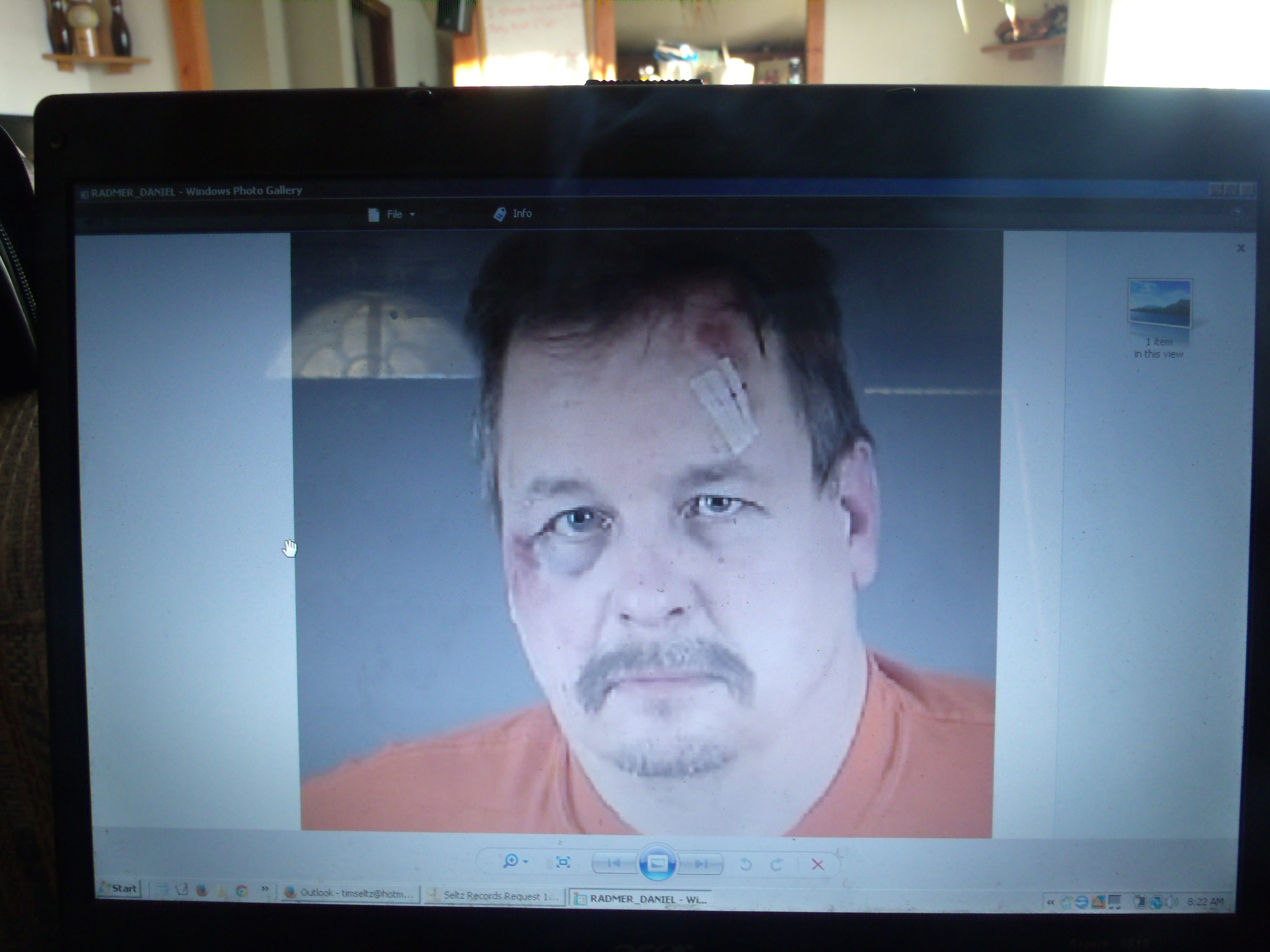 In late December 2013 a caller informed Waukesha PD that a man was possibly drunk driving near our local Walmart Supercenter.  I was tipped off to this incident via Waukesha Freeman (newspaper) Facebook posting. Many people were commenting on the incident and one commenter wrote that the cops “Beat the shit out of the guy.” That seems to be the case according to the picture.

According to the criminal complaint authored by “specialist Mark Howard” (who wasn’t apparently present for the incident,) Officers Justin Rowe and Ryan Lafavor made contact with DRR (name withheld for privacy) in Walmart. They stated he was “lying on a shopping cart and stumbled while he walked.”  It also states the man had vomit on his jacket. He was asked to exit the store with the cops and did so willingly. The 53 year old willingly left the store with the cops to submit to field sobriety tests.

The individual allegedly failed the FST and was told he was being arrested.  The cops say the accused folded up his arms and stated he wasn’t going to be arrested:

Now the individual accused is a 53 year old Waukesha resident who lives in an upper middle class section of the city. He’s never been convicted of so much as a traffic ticket according to online court records. The accuser, Ryan LaFavor, on the other hand is known to be violent and is currently at the center of a Federal Civil Rights Lawsuit claiming he beat another 50 year old man who was trying to check on his teenage daughter after a car accident.

The criminal complaint goes on:

Said reports further indicate that Rowe and LaFavor moved away from the defendant as the defendant lay on the ground handcuffed. The defendant suddenly swung his left leg toward Rowe. The left leg did strike Rowe in the thigh. Rowe felt pain to his right knee area. The defendant yelled and indicated that he was going to kick Rowe’s ass.

So the cops claim to have moved away but apparently not far enough (10 feet would have eliminated any potential problem) from the handcuffed individual who was laying on his stomach. Well the cops charged the 53 year old with no criminal record with a Felony Battery on LE and of course, say it with me, “resisting arrest.”

I only have the criminal complaint and and a Facebook post from a witness to go by but I do find it odd that Ryan LaFavor keeps running into 50 year olds with lots to lose willing to start, at their age and social status, fighting 25 year old huge cops. I won’t be able to get any of the audio recordings or other evidence until the completion of the trial. I will assume the cops’ body mics had some sort of malfunction which is epidemic with Waukesha Police Department which we’ll discuss in a later post.

Officer Rowe was was diagnosed with “a contusion and an abrasion to his knee.”

I requested comment from (PIO) Waukesha PD Captain Ron Oremus and Defense Attorney Craig Kuhary and have not yet received a response.

WI has one of the strongest open records laws in the nation. You wouldn’t suspect that when requesting records from various local government agencies.

After a recent incident I was involved in pertaining to Michelle Enderle, Darin Wittnebel, and Jeremy Bousman (much more to come on this) all of whom are Waukesha cops I was kind of surprised when Ron Oremus, Captain and Records Custodian for Waukesha PD quoted me $240 for some internal affairs complaints, some photographs, and some audio. I’ve worked with Bill Lueders of WI Freedom of Information Council for years and am quite aware of the requirements WI records custodians are under when I make my requests.

Captain Ron Oremus actually contacted the city HR department to obtain the full dollar amount of his salary plus benefits which came out to $64.19. At that rate it would seem he’d have taken an high paid hour of his day to review the WI DOJ Compliance Outline. (It literally takes only 1 hour to become an expert on WI records laws) I won’t bore you with the half dozen or so blatant violations of the records law Oremus partook in but I will tell you the law states fees must be based on the lowest paid capable worker. That comes out to about $18/hour and not $65/hour.

I’ve since received nearly all of the original records request and incurred no fees in accordance with law. It took some citing of case law and nearly filing a complaint with WI DOJ but Ron Oremus has come full circle and is now in full compliance with all WI records laws. I am truly impressed.