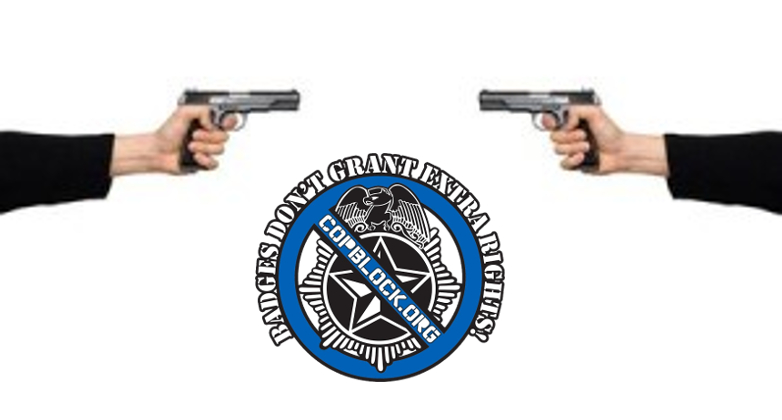 The following post was shared with the CopBlock Network by Justin King, via the CopBlock.org Submissions Page.

Governor Mitch Daniels signed into law a bill in 2012 that authorized citizens to use deadly force to protect themselves from unlawful law enforcement activities. When he signed the law, the press and police unions had a field day describing the predicted effects of the law that they said declared open-season on cops. Since the law was signed, only one human police officer has been killed in Indiana. It was in the normal performance of the officer’s duties and completely unrelated to someone protecting themselves from unlawful intrusion or police brutality. Three police dogs have been killed in the same time period. Since its introduction, not a single officer was killed because of this law.

In fact, despite propaganda saying otherwise, police don’t have an extremely dangerous job. Law enforcement doesn’t even make the top ten list of deadliest jobs. So please, no emails explaining how dangerous the job is and how this would make it more dangerous. Also, forego the emails stating that law enforcement is there to protect the citizens. They aren’t. This was established by the Supreme Court.

While being a police officer isn’t that dangerous, it certainly seems like interacting with them is. Being a civilian that has contact with a cop is more dangerous than being a soldier in Iraq. Since the start of the Iraq war, estimates by the Department of Justice place the number killed by cops at over 5000. In all branches of service, the number of killed in action in Iraq is 4489.

These estimates only include those who actually had their lives ended by law enforcement. It does not include those that were simply beat, sodomized, or had their testicles crushed. In a just society, a young man who was stopped on the street and patted down with such force as to cause his testicle to rupture would have the legal option to defend himself against the assault. If the altercation happened between two civilians, lethal force would have been justified in order to protect from further serious bodily injury. It should have been justified in this case.

The legislatures of the various states need to produce laws that allow the citizens to protect themselves from the rogue elements of law enforcement within our society. If not, the people should petition the federal government to enact such a law. The police have failed to protect society from their own brutality. The oversight committees have failed to protect society from the police. The courts have failed to protect society by not severely penalizing these actions. The legislatures need not follow their examples.
​
Lawmakers should immediately enact laws that allow the citizens to protect themselves from failures that ultimately belong to the government. This is not giving a green light to violence against law enforcement. It is giving citizens a final recourse to make sure the violence is directed at the offending officer, rather than whatever officer is caught in the middle of the riot or protest that follows yet another cop walking free after brutalizing an innocent person. It has been shown in Indiana that laws like this only serve to slow police violence, not escalate violence against police. Lawmakers owe their voters the right to defend themselves against the fast approaching tyranny.

It is an almost certainty that this will be read in law enforcement circles, and many of the cops that abide by basic standards of human decency will be offended. Good. Be offended. The American people need you to start waking up and speaking up. While it may seem hard to break the thin blue line when you witness brutality, understand that the life you save may be your own. If there is one thing the recent events in Ukraine have taught us, it is that violent and brutal police action will eventually lead to violent and brutal action against the police.

Many activists in the United States felt a personal connection with the protesters in that seldom thought of Eastern European country. Just as it is assured that some law enforcement in the United States felt a personal connection to the cops. The odds are that the Ukrainian police officers that were set on fire committed no action that deserved that fate, but when mob violence occurs against the state it is indiscriminate. The odds are that the worst those particular officers did was remain silent about the brutality and miscarriages of justice they witnessed, but a time comes when silence is betrayal. If you remain silent after witnessing brutality and injustice, you have chosen your side.

History has shown without exception that those who claim “I’m just doing my job,” or “I was just following orders,” end up committing the worst atrocities known in all of human history. It has also shown that the excuse falls on deaf ears when those who were victimized finally achieve power. If you consider yourself one of the good cops, it is time to start speaking out. It is time to begin lending your voice to those beaten masses that are crying out for justice and, in some cases, retribution.

About the Author:
Justin King is an independent journalist whose work has been seen on digitaljournal.com, cnn.com, theblaze.com, as well as other outlets. Much of his work deals with the advancing police and surveillance state.