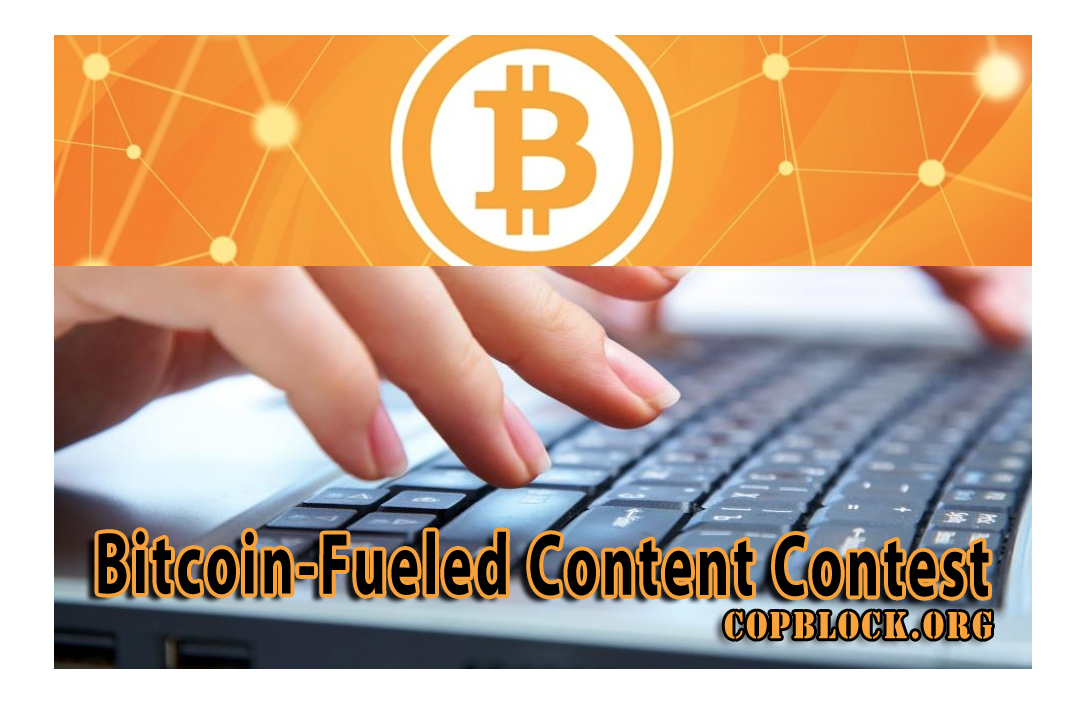 The six essays received for the Bitcoin Fueled Content Contest are linked-to below, along with a couple of excerpts and a couple of my own comments. They are listed in the order that they were received.

All authors have been contacted and asked for their mailing address so that they can be sent outreach materials like Cop Block flyers and stickers.

The authors of the four essays deemed best, which have their title underlined below, as set by contest constraints:

1. inform the reader of the situation we face
2. explain why it’s important that they don’t remain apathetic
3. empower them to help bring about a positive change

were also asked to indicate their choice of a hoodie from CopBlock.org/Store and reminded of the remaining contest criteria: Though examples given are drawn largely from one place – Cleveland, Deo points-out that such situations – people being wronged by those who swore an oath to protect – are occurring everywhere. He makes clear that what happened to Kelly Thomas (beating death, no repercussions levied at those responsible from inside-their-system avenues) could happen to anyone. And he’s right.

Yet, Deo isn’t all doom-and-gloom. He’s been really active online and continues to see the impact had through transparency and connecting with like-minded people, especially now as access to cameras is available to many.

The camera that is found in almost every phone on the streets is capable of capturing the condescending attitudes of the police. We see that they think they are above the law, and superior to us citizens. The camera has become the great equalizer in bringing these encounters to light

And his conclusion – though broad – is right on the mark:

Whether it is illegal parking, or murder, badges do NOT grant extra rights! The issue of police accountability needs to be addressed. We can no longer allow these killer cops to run rampant over our civil liberties. We must be the ones to hold them accountable, because they obviously won’t do it themselves! Pay attention, because the police state? IT’S HERE! Get involved before it gets you! Fighting Fascism: A brief history of America and ways to stop the Police State
http://copblock.org/fighting-fascism-a-brief-history-of-america-and-ways-to-stop-the-police-state
by Corey

Starting with statement “The government of America was forged in the crucible of rebellion” and outlining the situation on the ground in the mid and late-18th Century, which is likely to speak to many readers who tend to have a favorable view on that history, Corey wastes no time making clear that the constitution is “a self-contradicting document full of cognitive dissonance and unclear commandants.” He expounds:

The American government has experienced an evolutionary change from volunteer peace keepers to a bloated system with jackbooted state mercenaries carrying rifles just to apprehend petty thieves, fast drivers, and drug users. How did this happen? Either the constitution has failed or been misinterpreted and ignored. I would argue both.

Frankly, I was glad to read the strike-the-root perspective of this essay, as I truly believe that before any real, positive chance occurs, we must each withdraw our consent from the coercive apparatus, and the text on paper that some say will “properly” restrain police state incursions.

As for how to get there from here, Corey outlines the following:

I propose solutions that will nonviolently (where defensive force is allowed) stop the rise of a tyrannical state. Firstly, a mass tax boycott, but we need critical mass to implement this. There can’t be police if there is no state and there can’t be a state with no taxes. Secondly, a boycott of mega corporations (this will be hard). Lastly, we establish freeconomies and alternative economies using things like Bitcoins. These small steps can begin to end fascism with no shots fired. In this essay BewareMouse paralleled the training of police horses to the desensitization of the american public – so that both accept without question an artificial state of chaos, created and compounded by the actions of those who seek to control others. From the essay:

Most people go on with life never realizing what may be assembled right in front of them or what the consequences of this may be until it is completely in place.

BewareMouse then points to 18 USC 241, 18 USC 242 and 18 USC 245, which were ostensibly created to oust corrupt government actors, though (unsurprisingly) those said to have the authority to move such actions forward (the attorney generals), have tended to not make that happen. He concludes:

The constitution is the foundation of what we base all of our laws from… The key to making a change once again is to write, inform, and demand the actions of the government to follow the laws concerning the constitution. Only with the permission and ignorance of the public would such illicit laws and actions ever be allowed here in America.

But my question to BewareMouse and others who still have faith in the idea that that system can be reigned-in or “fixed” is: Is it possible for a coercive institution to ever be anything but? Rather than believe that with the right leader or a proper adherence to text on paper occur, might it be time to move forward on other fronts? Richard gave a personal overview on her upbringing and life experiences that caused her to go from someone who hardly questioned the “authorities” to someone who recognizes the value in not just asking questions, but in documenting and disseminating those conversations through technology. From the essay:

Now is the time for all of us to begin to use our knowledge of technology to shine a light on the erosion of our constitutional rights and the emergence of the new police state.

Together, as we all stand up against corruption and misconduct, we will gain the attention needed to change this country into one that would be recognizable to our founding fathers and one that we can all be proud to call ours, not our government’s.

We Have Been Looking Through Jaded Glasses
http://copblock.org/we-have-been-looking-through-jaded-glasses
by Scott Gregory

Gregory takes a pretty objective and realistic approach – one that is likely to not be off-putting to those who may be new to this conversation. After pointing to shows like COPS and CSI and the impact of corporate media, he covers a lot of ground – pointing to statistics on the militarization of police and the use of SWAT teams, disclosing the fact that being a police employee isn’t one of the most dangerous jobs and that court rulings tend not in favor of justice-producing outcomes, and making clear the harm of arbitrary legislation that’s created victimless crimes and asset forfeiture.

He then asks the reader “Why should you care?,” which is a great means to personalize the information and hopefully induce a pause and reflection of the ideas already presented. Gregory notes:

We have the tools to change this. Now. Even with all this apparent doom and gloom, we have never had better tools to make changes.

And he encourages readers to recognize that drug prohibition – just like alcohol prohibition – fails, that “Cognitive Dissonance is a huge problem,” that police should actually be held to a higher standard (not a lesser standard), that open source accountability can bypass completely the institutions that have propped up the police apparatus in the past, and he ends by underscoring the fact that when there’s no victim there’s no crime, and makes mention of acting upon that via jury nullification. Why Should You Care?
http://copblock.org/why-should-you-care
by Victor Taglia

Right away Taglia’s write-up addresses the reader and seeks to establish some common ground. In no uncertain terms he notes:

Maybe you accept the argument, “They are just doing their job,” or think, “I am just a regular law-abiding citizen. That will never happen to me.” The problem is that there is a good chance it might.

He mentions the truth-capturing aspect of recording the police:

It is impossible to know how many innocent people are in jail because it ended up being a he-said, she-said argument between the victim and the police officer, because there was no other evidence

Encouragement is given to the reader to not sit idly by on the sidelines and some key information is shared:

You can “flex your rights” by filming, refusing searches, refusing DUI checkpoints, remaining silent, or not giving identification unless you are being detained. You can also join a protest, sign a petition, and one of the most important: spread the word. Educate your family and friends about their rights and on current events or forward news articles relating to police brutality or infringed rights. But most importantly: be safe.

The additional recommendations proffered by Taglia – to be courteous, to proactively research related info, and to be aware of ones location (public or private property) – are sound, as is his conclusion, which underscore that fact that when one stands up it’s a selfless act:

By not surrendering your rights, you are not only standing up for yourself, you are standing up for all of the citizens of the United States as you become one of the knights in shining armor fighting for the very ideas this country was founded on.