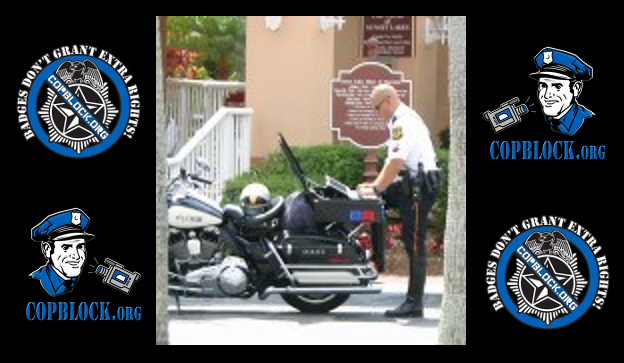 Patrick Neptune shared this post with the CopBlock Network, via CopBlock.org’s submit page.

My name is Patrick. I am an African-American, Disabled Veteran, and over the age of 55.

I live in a private gated community. On April 1, 2013, I was returning to my home when I was cut of by motorcycle officer Phillipe Lanoue of the Miramar Police Department. He turned into the community clubhouse parking lot, which is on private property in the gated community. I followed him into the parking lot. I parked my car and stayed in my car with my seatbelt on. I informed the officer that I nearly hit him because he failed to signal. The communication lasted about one minute. As I approached the stop sign to leave, the officer came running and stood in front of my car, blocking my access to leave. Officer Phillipe Lanoue, badge #210, of the Miramar Police Department, issued me a ticket for allegedly not wearing a seatbelt while parked. Pursuant to Florida Statute a seatbelt must be worn while the vehicle is in motion. Florida Statute also states that an officer has no jurisdiction to issue a traffic citation on private property in a gated community. As Paul Harvey would say, “And now, the rest of the story!” The ending to this story is true. It will sound CRAZY, but it is true.