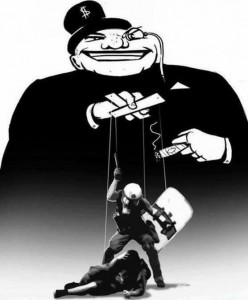 Dedication: This article is dedicated to all those wrongly slain by police and victims of democide all over the world. Special acknowledgments are Bobby Hutton, Fred Hampton Sr., Oscar Grant, Sean Bell, and most recently Kelly Thomas.

Disclaimer: I am not anti-cop, just anti mindless thug badge or not.

The American Government is an extortion racket and a violence monopoly. The American incarceration rate dwarves every other country even overt fascist countries with larger populations like Russia and China (because we’re number one!). The status quo rebuttal would be, “Well, we have better policing and higher crime in some areas.” This statement is absurdly wrong because America has the same or lower crime rate of most other countries (highest crime is in gun free cities where black market drug cartels rule). The real reason is that Uncle Sam jails mainly nonviolent petty thieves, vandals, and drug addicts. His victims might need counseling but don’t deserve incarceration.

Why are so many Americans in cages today? The profitization of misery is why. Every person incarcerated earns either a private business or the state itself money. It is simply slavery 2.0. This is not surprising especially to those that have seen the PBS documentary Slavery by another name. It describes the post-Civil War horrors of newly freed slaves rounded up for ridiculously minor offenses and forced to work on chain gangs to build infrastructure. This is structural violence in one of its most brutal forms.

The term Structural Violence the way I use it was popularized by Harvard educated prison psychologist, James Gilligan. He often describes how the more unequal a society the more violent and self-destructive it is. Dr. Gilligan views violence and crime like a crabgrass weed but not cutting the blades but uprooting the whole plant. This man also has reformed hardened criminals so he knows his business.

The institution of police is paradoxical and doomed for failure. Its basis is coercive taxes that pay the salaries of average men to enforce law via violence. The police are fallible humans just like the average citizen but the power of the position also intoxicates. Cops abuse the position of power similar to how pedophiles become priests to gain access to helpless children. Also, the institution doesn’t strike root of aberrant behavior (Pete Eyre of CopBlock believes in striking the root too) , but only drives it underground.
I also believe the goal of a police should be to protect people but actually cops are not obligated to do so. Instead, they are incentivized to write tickets and make petty arrests for promotions. Police are simply house slaves that keep us field slaves in line, not protectors (President Obama is a pathetic house slave too).

If the average American realized that cops are not protectors but thugs of the state, they would become irate and disillusioned if they possessed basic sense. Wanting to lash out like African-American slave Nat Turner in a rage against the oppressor is understandable but ill advised. We are in dire straits but reckless abandon would worsen the situation. They want us demonized, disarmed, and afraid.

For example, the so called “gun control debate” which really isn’t about debate or gun control but a state weapon monopoly. The corporate media goes into a frenzy over the latest school shooting fiasco. Soccer moms say “Please save our kids, Mr. Government!” The corporate controlled politicians demonize private gun ownership despite the fact that hammers are used more often in crimes than rifles. The hacks in Washington however never question the police militarizing with full auto rifles and armored vehicles. The kings of old never questioned their armies being armed to the teeth either.

The inherit hypocrisy of violent monopolies should be should self-evident but obviously is not. It is safer than ever to be a cop with only 33 killed on duty in 2013 but yet they act like paramilitary brutes occupying a foreign land. No wonder why the term police state is used to describe a totalitarian regime because police act as the agents of oppression not the dictator himself.
“Revolutionary Suicide” a term coined by the late great Huey P. Newton (Original Black Panther cofounder) refers to fighting the oppressive American regime despite certain or probable death. It is actually setting up oneself for homicide by the state not actually suicide. This concept contrasts with the late Dr. Martin Luther King Jr. that preached strict nonviolent resistance. I admire Dr. King’s spiritual idealism but I find defensive armed force resisting tyranny absolutely necessary. As an atheist I believe turning the other cheek gets only you slapped twice (or literally shot twice).

Enter Bhagat Singh, East Indian revolutionary freedom fighter, whom avenged the democidal murder of his friend by British Imperial police by killing the cop who did it. He evaded capture until he bombed a British headquarters. He was tried and hanged for his crimes but he caused rebellious fervor in India. Gandhi is a great figure by without violent opposition perhaps the Empire would have not conceded.

All people that believe in personal freedom, I ask you let’s not feed the beast. Don’t join the army or local police forces, and stop paying taxes. Don’t give into fear but compassion for your fellow man. If we all stand together as brothers (and sisters) there is nothing they can do to stop us. Let’s have legal armed demonstrations and take the parasitic clay giant that is government down (I will lead the charge). Larken Rose says government is just a destructive religion, so let’s become political atheists. Unite despite petty differences.