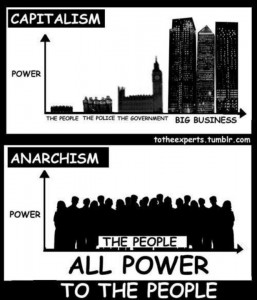 Corey shared the following for the second part of the Bitcoin-Fueled Content Contest.

American founder, Thomas Jefferson once said, “Every generation needs a new revolution.” This statement is true more than ever today. Although I honestly see the founders as hypocrites for owning slaves and looking down on natives and other poor Caucasians, I admire them for defying an Empire. They believed in personal liberty, at least for rich white men, which was revolutionary at the time. Despite all this, their small, elitist government has grown to the Police State of today with domestic spying and the highest incarceration in the world.

Beautiful, anarchist youtuber, Josie the Outlaw, asked, “Who owns you?” This strikes at the root of the problem of today because politicians are our owners, and the police are their house slave attack dogs. Police see themselves above the average citizen, when in fact; they are just slaves to them and masters to average people like me (for now).

During the pre-Civil War slavery in America, an African-American house slave whipping boy would dole out corporal punishment to disobedient field slaves on behalf of the slave driver and the master. Only in rare cases did the driver or the master beat the slaves directly himself. This parallels to today how we almost never deal with politicians directly but don’t pay taxes, jaywalk etc. and one of their trained thugs will deal with you.

Some may think we need to return back to the constitution. I would ask: the same constitution that considers minorities less than human until later amendments? Although the constitution protects freedom of speech, it’s ignored, ask Occupy Wall Street. It protects the right to privacy, but ask Edward Snowden getting asylum in a fascist country to expose America’s domestic spying. The People’s Republic of China has a wonderful constitution, yet protesters and political prisoners are murdered by police.

There is NO government or police accountability in America. The police can brutally beat a man for no crime, all on tape, and the corporate whore media will cover acts of civilian violence instead. Individual police officers are caught beating wives, molesting children and sexually assaulting women (in rare causes homosexual men), yet we are supposed to feel protected by these oppressors?

Exercise your innate right to free speech and protest the financial crimes in New York especially and state issued pepper spray, truncheons and guns will greet you. Protests merely beg the bought and paid for politicians in Washington for reform. Money controls Washington not votes.

Representative Democracy is a clever lie and hoax. We supposedly elect officials to office for our wellbeing and behalf. However, they have no accountability when serving their term and can simply be bribed by the largest companies. So-called Representative Democracy preserves power and authority in hands of a few while the masses are left with table scraps.

Authority over other humans has always been a lie ever since ancient times when kings claimed divine right to rule over subjects. The kings would just fabricate this delusion of divinity and create familial dynasties. Kings do not need many enforcers if their populations are so brainwashed to believe the lie. During feudalism in England, many peasants would work for a lord. Only a few bailiffs were needed to keep them in line. Only a few times did the peasants realize the scam and rise up.

Today, fractional reverse banking is legally shafting the public but take something from a supermarket without paying and you will spend the night in jail. Greek slave and writer Aesop eloquently put it “We hang the petty thieves and appoint the great ones to public office.” This travesty is still unfortunately true because politicians and their enforcers take away the most precious things in the world, lives and freedom.

Frankly, America is little better than it was in 1950. A minority house slave on the throne (obama, I refuse to capitalize his name) is not much better than a Caucasian one. Just like being clubbed by a minority cop hurts about the same as a Caucasian one. There was an African Caesar in the late Roman Empire that still oppressed other minorities before it collapsed. The problem isn’t rendering to Caesar but the fact there is a Caesar in the first place.

Unlike most activists that just want police accountability, I want to end the coercive institution altogether because I do not believe in the god of authority. The same way I ask, why do need Catholic priests in first place as an atheist when I consider their frequent abuses. Police only rarely stop crime. Humanity does not need self-righteous state-sanctioned goons to police us especially when we understand the root causes of crime in the first place.

In places like Amsterdam, there are no drug dealers shooting each other. Since drugs are virtually decriminalized, there is no incentive to sell or fight over it. When is the last time two moonshiners had a shootout in America? That’s why I want to pull my hair out and want to pimp slap a politician when they want to consider cannabis legalization when all drugs should be legal in the first place. Late actor Philip Seymour Hoffman may still be alive if there was place in America where addicts could go without condemnation and incarceration and receive treatment for their disease.

Humanity, we have a choice, either we give into fear of criminals only to be oppressed by state-approved ones by Big Brother or we can say no to the oppression and be free from all coercion. I’m not anti-police (just like I’m not anti-Afghan); I just want the conditions gone where they feel the need to hurt people. Awake the sleeping giant of free humanity, because we can be free if we want to be. We simply must stop believing in the god of money and authority.