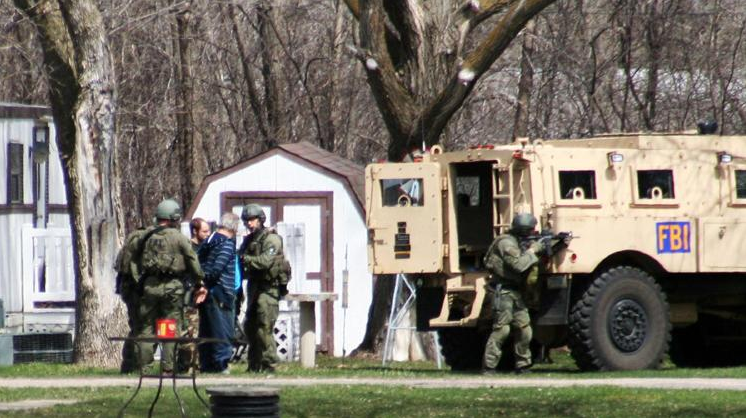 After the Police Accountability Tour concluded in New Orleans, I rolled up to Minnesota where I have family. Shortly after, I created the video “FBI Excels At Foiling Own Plots,” which detailed the flawless record of FBI employees in stopping schemes of their own creation – done, as public choice economists would point-out, not to satisfy any of their “customers” but to further the post-9/11 security theater agenda and the perception of the necessity of their outfit.

So, when I learned that a couple of people here in Minnesota – Buford “Bucky” Rogers and Keith Michael Novak – had been snatched-up and vilified under similar pretenses, I thought it worthwhile to investigate. The attention-grabbing headlines about the arrests of Rogers and Novak paralleled the other “terrorism plots” that supposedly were narrowly adverted thanks to the diligent work of the brave folks employed at the FBI.

In “Domestic Terror Plot Thwarted in Minnesota: FBI” by Josh Margolin, Jack JaDate and Pierre Thomas shared at ABCNews, Jeanne Cooney, spokeswoman for the U.S. Attorney’s Office in Minneapolis, was quoted as saying that, “authorities rushed to arrest Rogers to get him off the street before he could proceed with his plans for an attack,” and that “concerned residents in the area” had spoken out about Rogers.

Yet Adam Christopher, the top-dog at the Montevideo police outfit, where Rogers lived and where “authorities rushed” to apprehend him, called Rogers a “minimal threat.” And just like many other FBI “busts,” which had years of FBI employee involvement, Christopher said that law enforcement personnel had been keeping tabs on Rogers for the last couple of years. As for “concerned residents in the area” – the search warrant used by FBI employees cited the input of just one man, who wasn’t even from the area.

That man – who the Rogers knew as Tim – was very likely an informant, working for the FBI. Is it a stretch to believe that Tim provided the FBI with incorrect or conflated information? He wanted to get paid after all. Days before the raid, Rogers himself told FBI employee Shane Ball that Tim, who had lived with him, had been kicked out because “he was violent and we don’t want that kind of shit.” Did FBI employees act on information they knew to be exaggerated? Do they, as actors in a coercive, monopolistic institution, have an incentive to create “terrorists” where none exist?

On May 6th, 2013, as Rogers pulled up to the Montevido house owned by his father and brother on the 1200 block of Benson Avenue, he was surrounded, handcuffed, kidnapped and caged by armed strangers wearing FBI, ATF, Minnesota Department of Natural Resources, Minnesota State Patrol, Bloomington Police, Montevideo Police and Chippewa County Sheriff’s Office badges.

A neighbor later said that “it was like something out of a movie.” Complete with a MRAP. Once Rogers was arrested the FBI launched its spin campaign. Just standard operating procedure out of the FBI book on what to do on the heels of a “terrorism” plot bust. Rogers was said:

Even if all those things are true, they’re certainly not criminal.

It was also claimed that a “cache of weapons” – firearms and pipe bombs – were found at the Rogers’ house. Jeff Rogers, Bucky’s father, said he doesn’t know anything about any pipe bombs, but that he had a bunch of pipes for plumbing, and that his son doesn’t own any guns but that he does – “So what?” he said, “that’s my given right to have my guns.”

After Rogers was snatched-up, Jeanne Graham ordered that he remain caged until trial for “the safety of the community.”

On September 26th, 2013 was Rogers indicted on a charge of being in possession of a firearm and other “destructive devices” including two Molotov cocktails, two “black powder nail devices” and a pipe bomb. He stated that he was “not guilty.”

Though FBI personnel didn’t hesitate to mention Rogers’ involvement with a potential terrorist attack, he was never charged with anything terrorism-related. Nothing.

Andrew Mohring, Rogers’ defense attorney, asked that Rogers be uncaged prior to sentencing since he’s long been in segregation. Though Ann Montgomery, who has the title of “U.S. District Judge,” declined, though she noted, ‘‘whether the history of this case has been overblown or not.’’ Her statement shows that she too realized the claims of FBI employees were a bit far-fetched. Yet it’s business as usual – the rights of one person are meaningless to the public relations campaign of the FBI.

Rogers has yet to be sentenced – he may be caged for three-and-a-half to five years.

I suppose the FBI employees involved are patting themselves on the back for… what exactly? Rogers caused no victims and area taxpayers are on the hook for hundreds of thousands of dollars spent on a fable constructed on an uncovered terrorism plot by paramilitary protectors.

I attempted to locate contact information for Jeff Rogers as he has been so outspoken on behalf of his son against the misinformation he believes was spun by FBI employees (at one point he suggested that FBI employee Ball was testilying). On January 17th, 2014 I called Rogers’ lawyer Andrew Mohring (612-664-5858) and left a voicemail, indicating who I was, my interest in seeing the truth emerge, and my hope that he’d pass my contact info along to Jeff. I have yet to hear anything back.

After Rogers was arrested FBI employees made public his mention of “Keith,” who Rogers’ had described as “a real smart guy and he is not a violent person” who goes to protests and rallies such as those against Monsanto. When Rogers was asked if Keith smuggled weapons, Rogers replied, that “he ain’t that kind of guy.”

The FBI employees were probably hoping for some more violent rhetoric as they nevertheless tried to solidify a connection between Rogers and Keith Michael Novack, another person in their sights. “What better way” – the FBI spinsters may have thought – “than to buttress one flimsy case with that of another!” On December 16th, 2013 FBI employee Christopher Crowe testified in the U.S. District Court in Minneapolis that Novak, a former intelligence analyst with the Army’s 82nd Airborne Division, who, upon returning from Iraq in 2012, had transferred to the MN National Guard A Company 1st Armored Brigade Special Troops Battalion in human intelligence, had talked of blowing up a National Security Agency training facility. Yet Crowe offered no details on that claim, and like Rogers, Novak has never been charged with anything terrorism-related.

Instead, Novak was charged with committing fraud in connection with stealing names, Social Security numbers and security clearance information from 400 members of his former Army unit in Fort Bragg. It’s claimed that Novak stole the information so that he could make fake IDs for his fellow militia members.

But as FBI employees know that taking identification isn’t too sexy, not likely to get a lot of headlines, they pumped up the terrorism angle. It was the supposed targeting of the NSA facility that made the rounds. And Novak, like Rogers, and others before, was painted as a scary militia member – belonging to the 44th Spatha Libertas or “Sword of Freedom.”

Those who’d knew Novak best – those in his former Army unit, didn’t believe he was violent. Instead, he was someone that “could talk about just about any subject very intelligently,” is “smart and opinionated,” and who stated that those in Congress involved in treasonous activity should be arrested – there are many people who could fit that description and have such a mindset. Should they too be raided?

As was done with Rogers, FBI employees worked to character assassinate Novak. When his Maplewood apartment was searched it was circulated that six firearms (all unloaded) were found, along with 5,000 rounds of ammunition. There are millions of people who are similarly outfitted. And there’s nothing criminal about owning such tools and means of self-defense.

I attempted to engage in conversation with Novak to help get his side of the story out there, as currently, the conversation is entirely set by his captors.

I called a reporter who did a write-up on Novak and inquired if he had more information on his whereabouts. He pointed me to the US Marshals. I called the US Marshals three times over the course of a week or more, and my name and number each time, but I never heard back. Real customer-oriented… Finally on my fourth call, I was able to speak with someone in another department, who informed me that Novak was being housed at the Sherberne County Jail. Visitation, I was told, was according to the jail’s policies. I called the jail and learned that to see Novak, I’d have to be on his visitors list, which meant that I had to get word to him of my interest.

In a write-up about Novak’s situation Suzanne Fackler, who lives near Novak’s father on Togo Road in Wayzata, was quoted, and her address was given. I searched for “Novak’s” in that neighborhood and on Thursday, January 16th drove to Novak’s dad’s house in the hope that he’d be willing to share any of his own thoughts. Unfortunately no one was home, and as the snow on the driveway and front steps looked undisturbed, it appeared as if he might be spending time elsewhere. I also went to Fackler’s house but no one answered. I left a note with my contact information at both houses. Thus far, I’ve yet to hear back. On January 17th, 2014 I called Anders Folks (612.335.1559), Novack’s attorney and noted my interest in communicating directly with Novack or anyone in his sphere. I have yet to hear anything.

Apparently the FBI employees must not have had too solid of intel as Folks and Charles Kovats, Jr, who’s prosecuting, Novak “are discussing whether a pre-indictment disposition may be appropriate.” On January 10th, 2014 they filed a joint motion to ask for a 30-day continuance during which time it seems likely they will agree on charges and pleadings. Again, Novak was said to be a potential-bomber of the NSA’s two-billion dollar spy center in Bluffdale, Utah, but was never charged with anything terrorism related.

The purpose of this post is to document the pattern of exaggerations by FBI employees in their handling of Rogers and Novak and to act as a magnet – to pull in any information that may not yet have been made public by corporate media. If you know any relevant information please do get in touch with me (pete@copblock.org).

After seeing just how pervasive the creation of terrorism paper tigers is to the legitimacy of the FBI, to the paramilitary police apparatus, and the entire “war on terrorism,” I see the need for transparency on this situation to be made accessible.

Remember, if you’re ever approached by a FBI employee, realize the aims of their institution, and act accordingly.