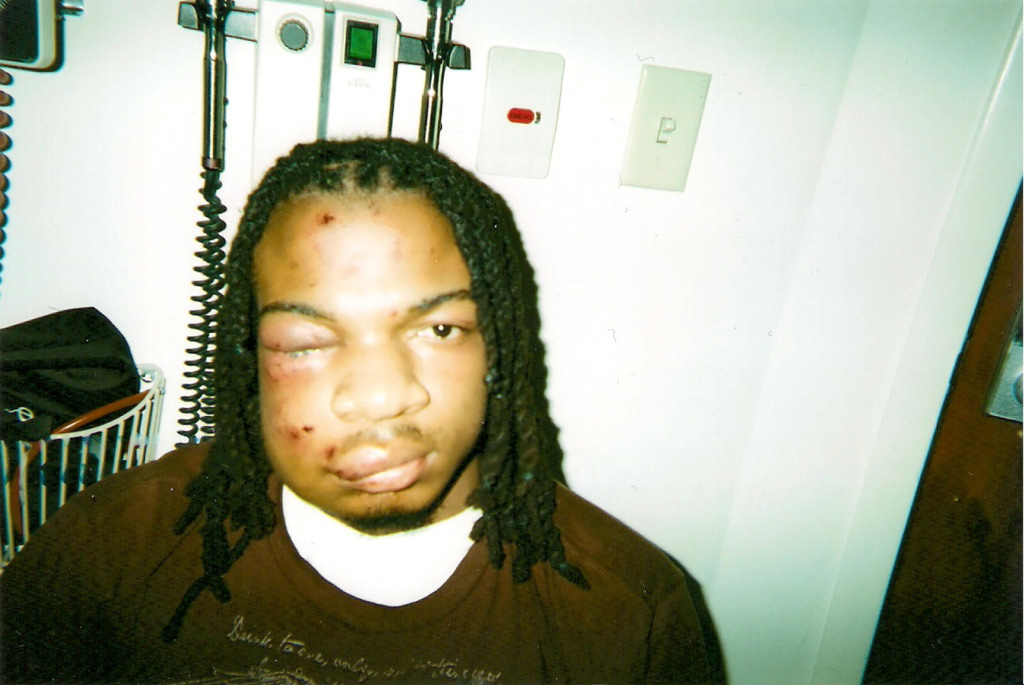 On the evening in January 12, 2010, Jordan Miles was walking home to his family’s home in Pittsburgh. The 18-year-old studied music at the Creative and Performing Arts High School. He was an honors student and had no criminal record. As Miles was walking, three police officers dressed in plainclothes exited from an unmarked car. What happened next is disputed, but one thing is for sure: Miles ended up in the hospital.

If you believe the version of the story told by the police, the three officers — Richard Ewing, Michael Saldutte and David Sisak — had received a complaint earlier in the evening from resident  Monica Wooding that Miles had been loitering on her property. The officers spotted Miles “sneaking around”  and noticed that he had an object in his pocket that could have been a weapon. They approached Miles, identified themselves as police officers, and asked him to take his hand out of his pocket. Miles took off, but tripped after he slipped on some ice. They tried to arrest him, but he resisted them violently and they had to use force to subdue him. After arresting Miles, they searched him and realized that the object they thought was a weapon was actually a Mountain Dew bottle.

There are a number of problems with this story. Firstly, Monica Wooding never complained to the police that Miles had been loitering on her property. That was a complete lie. In fact, she testified in court that Miles and her son have been friends for years.

The officers’ claim about the Mountain Dew bottle was problematic too, because the officers never filed it as evidence. It also never existed, according to Miles.

The officers also never identified themselves, according to Miles. They just asked him questions like “Where’s your gun, money and drugs?” — questions that would have suggested that they might have been robbers. Even if the officers did identify themselves as police, it’s hard to fault anyone for running from a group of strangers in the middle of the night. Remember, the police weren’t wearing uniforms and they were driving an unmarked car.

According to Miles, the officers beat, kicked, kneed, and choked him, repeatedly shoved his face into the ground, and ripped hair from his scalp. After he was in handcuffs, the officers continued pushing his face into the ground, causing his gums to be impaled by a piece of wood. Miles, thinking he was going to die, began praying. An officer told him to “shut up” then began choking him and slammed his head into the snow. Miles continued praying and another officer said “Didn’t he tell you to shut up?” and then choked Miles again and slammed his head back in the snow. After the officers had left Miles in the snow for a “protracted period of time,” he tried lift his head off the ground only to be hit in the face with an unknown object by one of the officers. When a police wagon showed up to pick up Miles, the officers who arrested him attempted to have him locked up in jail. Luckily, jail officials sent him to the a hospital where he received treatment for injuries consistent with the allegations he made against the police officers.

Once Miles was released from the hospital, he was charged with “loitering,” “resisting arrest,” and — you guessed it! — “aggravated assault.” However, due to of all the problems with the police’s side of the story, Judge Oscar Petite Jr. concluded several months later that he was “left with no other alternative but to dismiss all charges against Jordan Miles.”

In February, the three officers were put on “paid leave” (i.e., they were given paid vacations at taxpayer expense). While on this so-called “leave,” the officers received not just their regular salaries, but overtime pay for hours that they supposedly would have worked if they had not been put on leave.

Local prosecutors began looking into the case, but stopped when the FBI announced that it was conducting its own investigation. In May of this year, the Justice Department finally announced the oh-so-shocking decision: no charges will be filed against the officers. As the DOJ explained in its press release,

The U.S. Attorney’s Office , the Civil Rights Division and the FBI, working together, conducted an exhaustive review of the incident, which included interviews of more than 40 witnesses, some on multiple occasions, visits to the scene and careful review of all   police reports, medical records, photographs, laboratory reports, cell phone records and other documentation related to the incident.   After thorough review of all of the evidence, experienced federal officials concluded that there was insufficient evidence to prove beyond a reasonable doubt a violation of the applicable federal criminal civil rights statutes.

Under the applicable federal criminal civil rights laws, prosecutors must establish, beyond a reasonable doubt, that a law enforcement officer willfully deprived an individual of a constitutional right.    Proving “willfulness” is a heavy burden, and means that it must be proven that the officer acted with the deliberate and specific intent to do something the law forbids.   To act “willfully,” for purposes of the federal statute, means to act with a bad purpose to disobey or disregard the law. Neither negligence, accident, mistake, fear nor bad judgment is sufficient to establish such a criminal violation. After a lengthy, independent and thorough review consuming hundreds of hours of agent and prosecutor time, federal officials determined that the evidence was insufficient to prove a federal civil rights violation, beyond a reasonable doubt, against any of the Pittsburgh Bureau of Police officers.

If we are to believe the language of this press release, then the officers who attacked Miles can’t legally be prosecuted unless there’s a video of them explicitly planning to violate his civil rights and listing off the particular federal statutes that they planned to break. If the DOJ’s lawyers consider the fact that the officers completely fabricated their entire reason for stopping Miles and the fact that Miles ended up in the hospital with severe injuries to be “insufficient evidence” that the officers “willfully” violated his civil rights, then it’s not clear what else they could mean. Apparently the DOJ believes that officers who stop men for no reason, brutally beat them with potentially deadly levels of force, and then use perjured testimony to justify their crimes have, at worst, made a “mistake” or used “bad judgment.”

It took more than a year for this outrageous decision to be reached and for that entire period of time, the three thugs who assaulted Miles were sitting on their asses, soaking up thousands of dollars from the taxpayers of Pittsburgh. The day after the decision not to press charges was announced, all three of the men were reinstated as police officers without any sort of punishment whatsoever. When the Police Chief announced that the officers would be reinstated, he shamelessly commented that he hoped the beating would teach young people not to run from the police. “We aren’t the enemy out there,” he said with a straight face.

Compare the treatment the officers received from the criminal justice system to the treatment Miles received. He was charged with several crimes almost immediately after the incident based solely on the testimony from the officers who put him in the hospital. Whether Miles broke the law “willfully” in the sense described by the DOJ was probably never even considered.

This is not an isolated incident. Police regularly get special treatment from the criminal justice system. Ian Birk, a Seattle police officers who shot a man in the back and murdered him for no reason, escaped prosecution. As with the officers who beat Miles, prosecutors claimed that they couldn’t file charges because they were unable to prove that Birk intentionally broke the law. Deputy Matt Paul, an officer who paralyzed an innocent man for life by shoving him headfirst into a wall, dodged prosecution too. His nearly fatal assault “was just a freak accident,” according to one prosecutor. And the SWAT officers who murdered Todd Blair in his own home during a paramilitary drug raid were never criminally charged either. The shooting was deemed “justified.” Those are just a sample of a long list of examples.

As long as police officers continue to be given special treatment and shielded from the consequences of their actions, we can be assured that more police brutality incidents like the attack on Miles will occur.

To keep up to date on this story, check out the Justice for Jordan Miles campaign website.