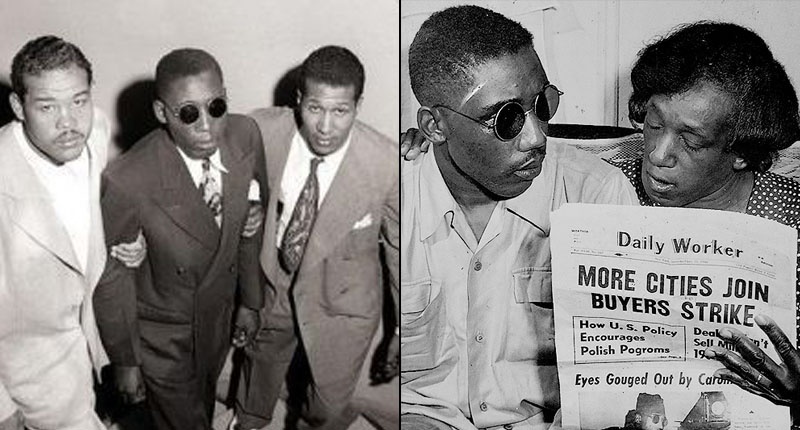 African American United States Army veteran Isaac Woodard is severely beaten by a South Carolina police officer to the point where he loses his vision in both eyes. The incident later galvanizes the Civil Rights Movement and partially inspires Orson Welles’ film Touch of Evil.

On February 12, 1946, U.S. Army Sergeant Isaac Woodard Jr. was on a Greyhound Lines bus traveling from Camp Gordon in Augusta, Georgia, where he was “mustered out” en route to his family in North Carolina. The bus came to a stop just outside of Augusta, and Woodard asked the bus driver if there was time for him to use a restroom. The driver grudgingly acceded to the request after an argument with Woodard. Once the stop was completed, Woodard returned to his seat without incident, and the bus departed.

The bus then stopped in Batesburg (now Batesburg-Leesville, South Carolina). Though Woodard did not protest, the driver contacted the local police (including Chief of Police Linwood Shull), who forcibly removed Woodard from the bus. After demanding to see his discharge papers, a group of police officers, including Shull, took him to a nearby alleyway, where they proceeded to beat him repeatedly with nightsticks. Woodard was then taken to the town jail and arrested for disorderly conduct, accused of drinking beer in the back of the bus with other soldiers.

While newspaper accounts of what transpired next vary, attorney and author Michael R. Gardner wrote, “In none of the papers is there any suggestion there was verbal or physical violence on the part of Sergeant Woodard. It’s quite unclear what really happened. What did happen with certainty is the next morning when the sun came up, Sergeant Isaac Woodard was blind for life.” During the course of the night in jail, Shull blinded Woodard. Woodard also suffered partial amnesia as a result of the injuries.

In his court testimony, Woodard stated that he was punched in the eyes several times on the way to the jail, and later repeatedly jabbed in his eyes with a Billy club. Newspaper accounts indicate that Woodard’s eyes had been “gouged out”, historical documents indicate that each globe was ruptured irreparably in the socket.

The following morning, the police sent him before the local judge, who promptly found him guilty and fined him fifty dollars. He requested medical assistance, but it took two days for a doctor to be sent to him. Not knowing where he was and still suffering from amnesia, Woodard ended up in a hospital in Aiken, South Carolina, receiving substandard medical care.

Three weeks after he was reported missing by his relatives, he was discovered in the hospital. Woodard was immediately rushed to an Army hospital in Spartanburg, South Carolina. Though his memory had begun to recover by that time, doctors found both eyes were damaged beyond repair.

Though the case was not widely reported in the immediate aftermath of the attack, it was soon reported extensively in major newspapers around the nation. The NAACP worked to publicize Woodard’s plight, campaigning for the state government of South Carolina to address the issue, which it frequently dismissed.

Woodard’s story also emerged in popular culture. On his ABC radio show Orson Welles Commentaries, actor and filmmaker Orson Welles crusaded for the punishment of Shull and his accomplices. On the broadcast July 28, 1946, Welles read an affadavit sent to him by the NAACP, signed by Woodard, and criticized the reaction of the South Carolina government as intolerable and shameful. Woodard was the focus of Welles’s show in the four subsequent broadcasts. “The NAACP felt that these broadcasts did more than anything else to prompt the Justice Department to act on the case,” wrote the Museum of Broadcasting.

On September 19, 1946, seven months after the incident, NAACP Executive Secretary Walter Francis White met with President Harry S Truman in the Oval Office to discuss the Woodard case. Gardner writes that when Truman “heard this story in the context of the state authorities of South Carolina doing nothing for seven months, he exploded.” The following day, Truman wrote a letter to Attorney General Tom C. Clark demanding that action be taken to address South Carolina’s apparent reluctance to try the case. Six days later, on September 26, Truman directed the United States Department of Justice to open an investigation on the case.

A short investigation ensued, and on October 2, Shull and several of his officers were indicted in U.S. District Court in Columbia, South Carolina. The case was brought to the federal level on the grounds that the beating had occurred at a bus stop on federal property, and that at the time of the assault, Woodard was in uniform. The case was presided over by Judge Julius Waties Waring.

By all accounts, the trial was a travesty. The local U.S. Attorney charged with handling the case failed to interview anyone except the bus driver, a decision that Waring, a civil rights proponent, believed was a gross dereliction of duty. Waring would later write of his disgust of the way the case was handled at the local level, commenting, “I was shocked by the hypocrisy of my government…in submitting that disgraceful case….”

The behavior of the defense was no better. When the defense attorney began to shout racial epithets at Woodard, Waring had it stopped immediately. During the trial, the defense attorney also stated to the jury that “if you rule against Shull, then let this South Carolina secede again.” After Woodard gave his account of the events, Shull firmly denied it, claiming that Woodard had threatened him with a gun, and that Shull had used his nightclub to defend himself. During this testimony, Shull admitted that he repeatedly struck Woodard in the eyes.

On November 5, after thirty minutes of deliberation, Shull was found not guilty on all charges despite his admission that he had blinded Woodard. The courtroom broke into applause upon hearing the verdict. The failure to convict Shull was perceived as a political failure on the part of the Truman administration. Shull died in Batesburg, South Carolina on December 27, 1997 at the age of 95.

Isaac Woodard moved North after the incident and lived in the greater New York City metropolitan area for the rest of his life. He died in the Veterans Administration Hospital in the Bronx on September 23, 1992 at the age of 73, and was buried with military honors at the Calverton National Cemetery in Calverton, New York (Section 15, Site 2180).

For more historically relevant stories like this one check out my page at: