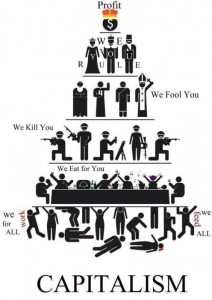 Corey shared this post via CopBlock.org’s submit page for the second portion of the Bitcoin-Fueled Content Contest.

“Divide and rule, the politician cries; unite and lead, is watchword of the wise.” A quote attributed to German writer, scholar and polymath, Johann Wolfgang von Goethe, is a phrase which has great resonance I truly appreciate. Politicians rule by dividing uninformed people over ethnic lines, sexuality and petty political ideological differences. The antithesis to this deceptive tactic is a wise leader who leads from the front, but not over others to accomplish a noble goal.

Obviously, Goethe’s definition of a politician is winning today when you look at the world. Hack spiritual leader, corporate media whore, and race pimp Al Sharpton frequently spins acts of civilian violence that may have a racial element to them but ignores the systemic police brutality that plagues African-American communities. The Manchurian house slave in chief has the same philosophy of private weapon ownership demonization while hypocritical praising his “Robocop” (a slang term I use for fully armored militarized police) enforcers. If the average person was not divided over petty differences they would unite over the common enemy that is governmental oppression.

If one thinks about it objectively, a poor African-American and a poor Caucasian are in the same boat yet they may feel like enemies. Classism is the biggest problem in America yet the propaganda in the corporate spews that racism is the bane of society. Racism is abhorrent, don’t misconstrue what I’m saying, but an average poor racist has no authority to harm a race he dislikes. On the other hand, a racist can become a cop and act out his prejudices with impunity.

The police are in a class above the average person with the politicians above them and the elite businessmen above them. We are divided along economic and occupational lines. The current capitalist structure is simply the most horrific form of classism short of ball and chain slavery. The modern police have replaced the slave hunters of old, instead keeping the free range slaves in line (rather than bringing them back to the plantation).

It amazes me that many average citizens truly believe that the average police officer cares for the safety of citizens when he is on patrol. We are propagandized that they are selfless protectors of the innocent like the superheroes of popular fiction. I ask, “Who were they protecting when many of them have beat, maced and tased the peaceful Ocucpy protesters since their debut?”

According to the 113th episode of the Cop Block Police Accountability Report, an on duty policeman in Los Angeles sexually assaulted a transgender “woman” (born male). The post sex change individual retrieved the used condom with the officer’s sexual fluids inside as proof. How did such a scumbag become a police officer in the first place? Does the position attract individuals that will abuse the power? I am repulsed by homosexuality anyway, so this story really appalled me. However, I jokingly have given the policeman in question the moniker of not “Robocop” but “Homo-cop”.

I don’t hate homosexuals or cops but when I see a case like the aforementioned, it makes me wonder. If the powers that be do ever cover this disturbing story, they will probably spin it to be pro-homosexual which misses the point of blatant police abuse. If this cop decided to buy a she male hooker on his own time it would have been fine (still repulsive but his business), but to use his badge to force anyone into sex is horrible.

Police officers, even retired ones, have a pompous, elitist attitude. The retired cop shooting a man just for texting in a movie theatre highlights the mentality of policeman. They envision themselves as knights above the peasants and enforce the most minor of offenses.

Where does this outlook originate from? Propaganda is a primary culprit. The mainstream corporate media (financed by government and penis pill TV ads) glorifies police, only showing staged acts of good deeds, while ignoring all the corruption and abuses committed daily. Also, police are trained to walk around with a sense of arrogance so average citizens will submit to them. There is an inherit neurosis in this hierarchical way of thinking. The recent rise in the amount of unconstitutional “no knock” police raids (one of my favorite activists, Adam Kokesh, was arrested in this fascist fashion) displays the fascist, authoritarian demeanor of police.

I want people to be truly equal. I don’t want some to be more equal than others (a phrase from Orwell’s Animal Farm). One of the most destructive forms of division is the state-supported elitism police enjoy. In our current society, police enjoy more rights than normal citizens, and this needs to stop. Everyone is FORCED to pay taxes to support these brutes and that is why I am against the idea of the state entirely. The hack politicians threaten gun control yet police (on duty, off duty and retired) can carry loaded weapons virtually everywhere. Such blatant hypocrisy is undeniably elitism.

Similar to how a balled fist is more powerful than an open hand, people need to unite. Occupy Wall Street’s failure was lack of a central goal and endurance. We can learn from the mistakes of the past and band together to end this oligarchical system.