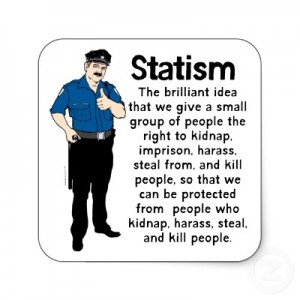 This post was shared via CopBlock.org’s submit page by Corey for the second portion of the Bitcoin-Fueled Content Contest.

Late, brilliant scientist Albert Einstein once said “We cannot solve our problems with the same thinking we used when we created them.” I believe what he meant was that we must think outside the box of cultural conditioning to truly address the problems of today and tomorrow. Although I know that I only can speak for myself when offering solutions for a better world, I know that solutions to fix the problems of today must come from outside the box.

I will go ahead and admit that my personal experience as a black male in America probably makes me more revolutionary about solutions. I remember attending public school as a 10 year-old being threatened with arrest (by a racist principal) for a recess tag match that in ended in roughhousing. I remember standing there as a child in a courtroom, with my parents beside me, being sentenced like I was violent felon. I received community service for the “crime.” I remember being paddled at my high school for shoving a fat white kid after he called me a racist slur. The principal was a racist power freak with short man Napoleon syndrome. He would go on to harass me and my mother for no reason later that year. He later died of a steroid overdose after I left that horrible school, and I feel no sympathy for him because he caused me and my family pain.

Obviously, these incidents help to shape me into an anti-authority person. I am not bitter over what happened, just wonder why aberrant people always find their way into positions of power. They gravitate to it like a fly to feces. Why do we need fascist power structures? If your answer is, “We don’t,” then how do we fight it?

I believe to effectively fight fascism, a definition is needed. 1940’s Italian dictator Benito Mussolini coined the term “fascism” from a Latin root that meant an ancient Roman axe bundled in sticks that represented the authority of the emperor. He used it to positively describe the unification of private business and government, and complete obedience to the state and its dictators. Now the term has come to mean harsh governments oppressing their populace and has a negative connotation.

According to Mussolini’s definition, the United States of America seems to a fascist dream. Corporations bribe the state into their agenda or virtually are the state. Police are subsidized by private institutions, such as New York police receiving extra funding by Wall Street. Police are celebrated despite daily abuses.

Since the arrival of Europeans to the continent, someone has been downtrodden in America. However, now America has become a lovechild between big business and big brother (disturbing image I know).

Personally, I want a complete abolition of the state. That does NOT mean I want chaos and mob violence in the street. That is the false dichotomy that corporations and governments give us. We are told that either we live in a fascist Orwellian police state, or live in a chaotic “anarchy” (anarchy just means no rulers, not chaos) with no state agents to save us. This makes completely no sense because even in that dichotomy we are either violated by state agents or regular people. The pain by of being assailed by a person that got a badge first hurts the same as an attack by a normal person (if not worse by state agents). I feel being violated by state agents is always worse because they have the AUTHORITY to kill and a power structure behind them. What separates a mafia from a government is only that government has the authority to use violence.

Government and corporate media say that police and the power structure serve us, yet we must submit to all authority figures. Eric “Freerock” of Cop Block was fined $500 for asking why he had to show his ID at a sobriety checkpoint. He was sober and committed no crime but was arrested and fined. How was the citizen served by the state in this example?

Paper proclamations have a poor track record of preventing fascism in the real world. The Magna Carta (a precursor to the American constitution not referring to Gay-z’s latest album) did not prevent King Henry VIII’s crimes or any British king’s for that matter. Once a power structure is erected, it is nearly impossible to get accountability for even the lowest ranked agent.

Why do we even need government? They all are just parasites and soldiers for the political and economic elite. The problem of governmental abuse is inherit in the very system, but the case by case abuses highlight that governments are made of flawed men (probably more flawed than the average person) as well.

Since the Neolithic age, people have been subjugated by kingdoms, empires or governmental oligarchies. I am not discouraged by this. Ideas like the airplane were laughed at as recently as the 19th century, yet something so amazing is common place today. Humanity needs a quantum leap (big jump like electrons leaping between orbitals) forward and to shake off the mental shackles that are government.

I hope I armed everyone with a definition of fascism and how we got here, so we can understand how to move to a better world. I posited the idea of a critical mass tax boycott in my first article, and it is still my primary antidote to our current enslavement. We may not be ready for that solution yet. The government is pretty strong now. If only a 1,000 people just downright stopped paying the mafia that is Government, they would simply be caged or killed. We need at least a million intelligent, united people to defy them. That many armed people could protect each other from governmental kidnappers. Until then, we need to continue keep arms, cop block, and spread liberty messages to others. Remember, freedom is not free. You have to earn it with sweat and blood.