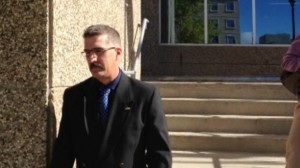 May 2013 – While on duty, (former) Police Officer Robert K. Power testified he urged an intoxicated man to check himself into the shelter, but the man refused and when he said he was going to arrest him, he became belligerent.

“F–k you. Do you want to fight me?” Power quoted the man as saying twice.

At trial, Power testified that he had acted in self defense by pushing the man with his HAND who was challenging him to a fight and who had approached with raised fists.

However, Judge Doug Kovatch determined Robert K. Power was lying and based his decision on a video from the detox facility where the incident occurred.

The man approached Power with his hands at his sides and when he got close, Power TOOK ONE STEP FORWARD and KICKED him. The man fell down, hitting his head on cement. The injury left a pool of blood on the ground.

The man was taken to the hospital, where he was treated and released back to the shelter.

Immediately after the incident, Power told the police service he only pushed the man with his HAND.

The judge said he took into consideration the Crown’s argument that police officers are placed in a position of trust and are authorized and trained to deal with situations in a way ordinary citizens are not, meaning they are to be held to a higher standard.