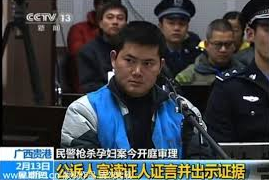 The write-up below was posted to FilmingCops.com with the title “Cop Sentenced to Death for Fatally Shooting Pregnant Mother and Her Unborn Child” on February 17, 2014.

An officer is  being sentenced to death for shooting a pregnant woman and her unborn child to death, and injuring her husband.

The husband and wife were enjoying their dinner at a restaurant they owned when a cop came in, began harassing them, and eventually opened fire on them.*

In addition to being sentenced to death, the cop was ordered to pay the equivalent of $12,000  in compensation to the victim’s family.

That money is coming from the cop’s own pocket, not taxpayers.

The husband suffered injuries to his right shoulder.

His unborn child died with the mother.

On February 13, a people’s court made the decision to sentence the cop to death for murdering the woman and her baby.

Does it seem unreal to you that a cop is being punished?

If so, it’s probably because you live in the United States.

You know that in the United States, cops are almost never punished.

You know they’re found “not guilty” even when they’re caught on video beating innocent Americans to death.

You know they get away with it even when they’re caught on video Tasing handcuffed girls to death.

You know that in the United States, when victims are compensated with money for crimes committed by cops, it’s stolen from your paycheck — the taxpayer — not the cops individually.

So why would a killer cop now be put to death?

It’s because we’re talking about China, not the United States.

He is paying 73,324 yuan to the victim’s family before he is extinguished in accordance with the decision of Chinese citizens.

If a cop did this in America, do you think he’d be punished for it?

Even if he were punished, do you think he’d be put to death?

Make no mistake about it: like any people living under the rule of a government, the Chinese have their own horrors of police brutality.

In this case, however, they appear to be doing far more than Americans would do in dealing with a killer in uniform.

*According to the Shanghai Daily, the pregnant woman, Wu Ying, and her husband Cai Shiyong were tending to their rice-noodle store when Hu, drunk and shirtless, entered and demanded milk tea. After the woman responded that the store did not serve milk tea, the officer opened fire, wounding Cai in the shoulder and killing Wu and her unborn child.

After this incident became known in October, 2013, the self-proclaimed rulers of China forbid police employees from consuming alcohol outside their own homes.

Note that in 2009 another police employee in China was sentenced to death for his misdeeds, but that sentence was later commuted.

And recall that last year, it came to light that some police employees are being trained to shoot at pregnant women.