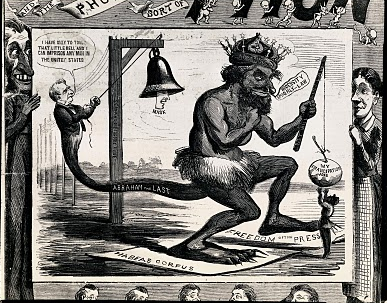 “The most destructive thing governments do is divide people against each other, all in competition over the reins of the state.”

So says Anthony Gregory, a prolific writer, who last weekend spoke at the Freedom Summit in Phoenix (see the post From the Freedom Summit for more). Gregory recently published The Power of Habeas Corpus in America: From the King’s Prerogative to the War on Terror and an essay he authored on that topic, first posted to Mises.org on August 14th, 2013, is below.

Words on paper have not alone been sufficient to check tyranny and preserve liberty. Legislation is not law. As Gregory concluded in a piece about his new book, “A society needs more than the judicial order to secure its freedom. It needs to value that freedom in itself.”

We know many things about habeas corpus. We know that it goes back to the Magna Carta and that the U.S. Constitution affirmed this bulwark of Anglo-American liberty. We know that habeas prohibits jailing people without cause, and that it remained healthy throughout U.S. history, except during wartime, until George W. Bush’s 2006 Military Commissions Act. And we also know that in 2008, the Supreme Court guaranteed basic due process rights for Guantánamo’s inmates.

The trouble is that none of these things are true. Five years ago, I believed the conventional civil libertarian narrative and began writing a paper to criticize the Bush administration and its nearly unprecedented violation of this sacred right.

My research revealed that much of what I knew about habeas corpus was wrong, and that many well-intentioned people had a romanticized view of the great writ. I published my findings in my Independent Institute book The Power of Habeas Corpus in America: From the King’s Prerogative to the War on Terror, and I found that as with other idealized state functions, habeas corpus has an uneven history. Indeed, habeas is a government power — specifically a judge’s power to summon and question a case involving detention — and judges have used it to centralize their own authority. About a century ago, legal scholar Edward Jenks controversially wrote: “the most embarrassing discovery [is that] the more one studies the ancient writs of Habeas corpus … the more clear grows the conviction, that, whatever may have been its ultimate use, the writ of Habeas corpus was originally intended not to get people out of prison, but to put them in it” [emphasis in the original]. Jenks oversimplifies, but his point certainly complicates the popular understanding.

The writ’s English origins are ambiguous, depending on whether we focus on the functional aspect — the power to oversee detention processes — or the linguistic. Habeas corpus means, “have the body,” and thirteenth century judges used such language to call forth witnesses and juries as well as prisoners. The Magna Carta guarantees against unjust detention, but does not contain the words “habeas corpus.” The common use of such words to defend a prisoner’s liberty came later. Even then, judges utilized the writ to monopolize power over lower jurisdictions.

When members of Parliament fought the king over despotic detentions, they championed an idealized writ, but this was wishful thinking, even disingenuous. Soon after Parliament beheaded King Charles in 1649, it proved itself just as tyrannical as the monarch, and jailed the opposition. The celebrated Habeas Corpus Act of 1679 was more administrative than revolutionary and contained loopholes.

In colonial America, habeas corpus arose from the bottom up. The legal community was informal. The common law that developed on this side of the Atlantic had a more organic development than in England, where it arose in the royal court system. In myth, Queen Anne gifted habeas corpus to Virginia in 1719, but Virginians had long observed it by then. The colonists, like their counterparts in Parliament, began romanticizing the Magna Carta and the Common Law for their libertarian elements.

American habeas corpus was originally decentralized. The Constitution of 1787 ruined this arrangement, centralizing the suspension authority, and its celebrated Suspension Clause allowed the central state to override state habeas corpus. Thomas Jefferson objected, although as president he tried to suspend habeas in his struggle with Aaron Burr’s conspirators.

In antebellum America, however, state habeas corpus remained prominent. State courts used habeas corpus against the federal government, although this fact has tragically gone missing in most literature on federalism. States even used habeas to challenge military enlistments, and they also used habeas to enforce as well as undermine slavery. The great writ’s usage to seize blacks in northern states with personal liberty laws, and return them to bondage, is a most shameful and neglected episode in U.S. legal history.

Prior to the mid-nineteenth century, the federal government had very little habeas authority over the states. A major shift came in the 1833 Force Act, where, to stop nullification of the tariff, the feds claimed the power to shield tax collectors from state imprisonment. In practice, the true expansion of federal habeas over states accompanied the Fugitive Slave Law, to protect federally-approved slave catchers from state obstruction. In the 1859 case Ableman v. Booth, the Supreme Court, in a pro-slavery decision, ruled against the state power to question federal detentions.

During the War Between the States, both the Union and Confederacy seriously violated habeas corpus rights. Lincoln delegated to a military authority the unilateral power to suspend habeas without congressional approval. In 1871, the Supreme Court finalized its revolutionary claim over the states in Tarble’s Case.

Libertarians should favor strong due process protections, but the nationalization of due process has had limits. Although the feds have expanded their scope over habeas, in less than 1 percent of the cases do prisoners get relief. Most convicts don’t file because the review process takes longer than their sentence. Once championed as a way to guarantee a speedy trial, habeas is now a bureaucratic process that takes half a decade.

In modern times, the federal detention state has exploded in the name of fighting drugs, crime, and terrorism despite the great writ.

Bush and Obama have locked up thousands of detainees in the war on terror. Most have been innocent, or often soldiers defending their country against U.S. invasions. The Bush administration rounded up hundreds of innocent immigrants after 9/11 and detained them for months without due process. Detainees like U.S. citizen John Walker Lindh remain in prison, having faced a civil procedure but no semblance of true justice. In Iraq, thousands of war captives were abused or tortured. Many have suffered at Bagram Air Force Base. Habeas corpus either does not apply to these cases, or formally applies but has no power to protect anyone’s rights.

The Supreme Court reprimanded the Bush administration over Guantánamo, and decided in Boumediene v. Bush (2008) that these inmates have constitutional habeas corpus rights. For most of them it has not mattered. Initially, a fair number were released by federal habeas, but far more were freed under military procedure. Obama, like England’s despotic kings, has circumvented the writ’s libertarian spirit. The Supreme Court’s formalistic boundaries are too vague and too deferential to executive power to effectively guarantee liberty. Even as both administrations have declared many remaining Guantánamo inmates totally innocent or unworthy of imprisonment, they remain in prison. Meanwhile, despite all the innovations of federal due process, America houses the world’s largest formal prison state.

The fact remains that habeas corpus is a government program, a fact from which all of habeas’s problems arise. It is a power that does some good, and we must cheer for anyone freed from a government cage thanks to this archaic writ. So long as the state detains people, robust protections are important. But habeas corpus presents libertarians with a paradox. It is the simultaneous affirmation of, and check on, state power. It strongly suggests that a government legal system can never deliver true justice. Judges have used habeas to empower central states, to capture slaves, and to create a false sense of security.

As for the habeas corpus act, better the statute books were rid of it. Standing or lying as it does, up one day, down another, it serves but to swell the list of sham securities, with which, to keep up the delusion, the pages of our law books are defiled. When no man has need of it, then it is that it stands; comes a time when it might be of use, and then it is suspended.

I’m not sure we’d be better off without habeas corpus. I’m also not sure we’re much better off with it. We need due process because we need to constrain the state, and because of the importance of individual liberty. That should be our focus: promoting a culture opposing despotism and the prison state. Perhaps the ambiguous record of the most revered legal institution in the English-speaking world will surprise many readers, but it shouldn’t surprise those of us who understand the true nature of state power.