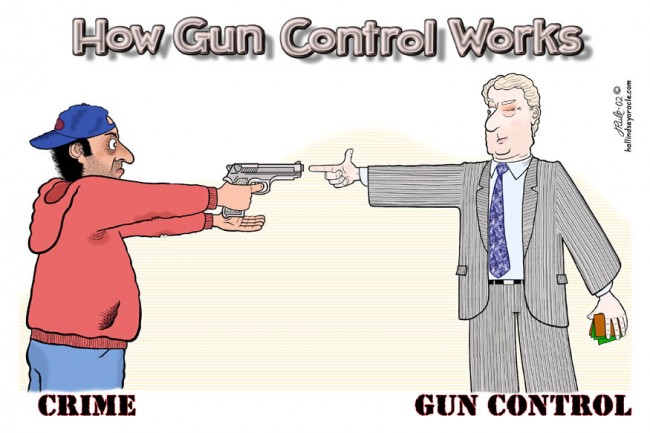 Victor Taglia shared this post via CopBlock.org’s submit page for the second portion of the Bitcoin-Fueled Content Contest.

I realize this is a very controversial topic, but I would like to add my thoughts.

When I first heard about the Sandy Hook shooting, I was all for regulation of guns including but not limited to automatic firearms, clips bigger than 10, and background checks for mental illness and criminal records. The problem is, not only would it be a violation of American’s constitutional rights, it wouldn’t even help that much.

Gun regulation/making it harder to get guns would be great if you could only buy guns legally. The thing is, you can also get guns illegally, and it is actually much easier to. Already the majority of gun related crimes are committed by people with illegal guns (not including the crimes armed public servants commit and get away with, but that is a whole different discussion). So the question is, is making guns harder to get legally mean it is also harder to get illegally? No, it is not. Criminals will always be able to get guns no matter the restrictions set on them, so why make it harder for law abiding citizens to get them to protect themselves from these criminals?

The 2nd amendment to the Constitution States that “the right of the people to keep and bear Arms shall not be infringed”. The Constitution also says that all men are created equal and that everyone deserves these rights. It does not say just sane people or as long as the magazine is under 10. “But automatic weapons weren’t even around when they made the constitution!” I agree, and that is why the US amends the Constitution. Without amending the Constitution, it is illegal for the government to create laws that contradict it.

That is why I am all for Senator Dahm and his support of Senate Bill 1473 that would allow for Oklahomans to carry firearms without a license. I believe this will actually lower crime rates. For one, if there are more people armed on the streets, thugs might think twice before holding up a liquor store or mugging someone. Also, criminals might use legally bought guns in crimes so it would be easier to track, instead of the illegal guns that are almost untraceable. Personally, if I lived in Oklahoma, I would feel much safer with many people carrying firearms.

I do not know much about police in Oklahoma and how they feel about people with guns, and even if they are pretty good about it, the police need to be trained on how to handle those encounters.

Now, I do not think this idea will work everywhere, but it will definitely work in many places (mostly places that are already gun friendly). I would like to see what happens with this bill when and if it is passed. If things change for the better, I would love to see this spread throughout the United States, as many people would.

Thanks for reading,
Victor Taglia