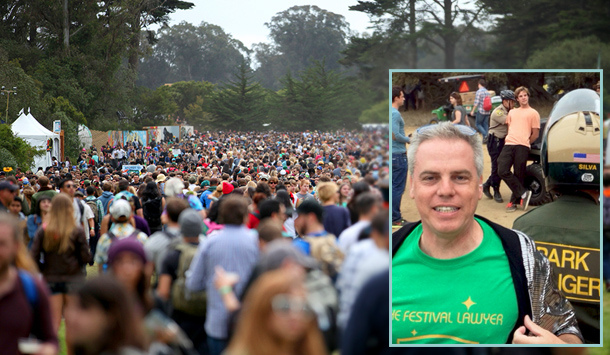 I know what you are thinking. What the heck’s a Festival Lawyer?

Is it a Public Defender who helps you out if you get arrested at a concert? No. (Although, to be honest, I wish I had thought of that as a job option after law school).

I’m a criminal defense attorney with a background as a former prosecutor. But I also have a background as a drummer, a DJ, and avid festival goer. The idea behind “The Festival Lawyer” column is to combine these backgrounds to give you legal and practical advice that will make you a safer, more responsible Festival Goer.

Advice like how to protect your rights if the police approach you at a concert. Or how to recognize the symptoms of a drug or alcohol overdose. We will talk about things like California’s Medical Marijuana laws or what to do if stopped for a DUI on your way to a concert. But mainly, the column will be focused on how we can make the Festival Experience work better for everyone as a more responsible, positive community.

As an aside, I’ve noticed that as soon as I start talking about knowing your rights, a certain percentage of people start complaining that I am somehow “teaching people how to commit crimes.”

This is dangerous nonsense. We don’t live in a police state (well, not yet anyway). As citizens it is not only our right but our duty to know and defend our Constitutional Rights and keep an eye on the police.

Anyway, let’s start with a hypothetical situation where the police stop you out of the blue in the middle of a music festival and start questioning you. They don’t say why they are stopping you but just immediately ask permission to search your person and backpack.

What should you do?

In any encounter with the police, a Judge will be looking after the fact at whether the police had a right to stop you in the first place. This is because the 4th Amendment of the Constitution says that you have a right as a citizen to freely go about your business unless the police can show they had a belief you were engaged in criminal activity.

What the police have to show to a Judge later depends completely on whether the Judge finds that you were being “arrested”, “detained” or were “free to leave”.

If the police arrest you, they have to show they had “Probable Cause” to believe you were committing a crime.

On the other hand, the police will probably argue that they weren’t arresting you but just “detaining” you. A “detention” is a situation where the police stop you briefly while they investigate a crime but haven’t arrested you yet. In a detention, the police have a much lower burden of proof. They only have to show a “reasonable suspicion” as to why they were detaining you. Or the police may argue that their entire contact with you was just a “consensual encounter” where you were free to go at anytime. In a consensual encounter, they don’t really need to justify why they stopped you because they were just talking to you and you were “free to leave”, (Because people always feel free to walk away when contacted by the police, right?)

So knowing the above, what should you do If a cop stops you?

The first question out of your mouth should be, “Am I being detained?” Then, “Why? What am being stopped for? Am I free to go, or am I under arrest?”

Memorize this. Repeat it out loud: “Am I being detained? Why? Am I free to go, or am I under arrest?”

Yes I am aware that like the cop in 99 Problems, the cop may not appreciate you being so “sharp as a tack” and view you as a potential troublemaker.

So your job in this situation is to keep calm and cool. Be respectful but clear and firm in what you are saying. It is completely reasonable (and legal) to ask why you are being stopped and whether you are free to go. By asking from the start if you are under arrest or free to leave you are forcing the officer to tell you exactly what is happening and whether you are a suspect.

One of the most common urban myths out there is that the police have to read you your Miranda rights or the arrest gets thrown out of court.

Not true. The police don’t have to read you these rights. In fact, the police have the right to completely lie to you in any interview. The only time they have to read Miranda rights is if:

The Right against Self Incrimination is in the Bill of Rights for a reason. USE IT. You should NEVER give a statement to the police without a lawyer. Period. No exceptions.

In the above scenario, questions like “whose backpack is this?” should be answered with a firm, “Officer, I am choosing to remain silent. I want a lawyer.”

4. Do not give the authorities consent to search you.

One other major Constitutional right you have is the right to be free from an unlawful search of your person and property.

So lets say you are already in a Festival when the police approach you. They won’t let you leave and ask for permission to search your backpack. (Obviously, security has a right to search you as you enter a festival and go through their initial security screening.)

Cops always make it seem like you’re some kind of a criminal if you express the slightest hesitation about having your property searched without a warrant. You can expect to hear an “If you have nothing to hide, why can’t we search your stuff?” type of verbal approach from the cops.

Know this…If the police are asking you permission to search you or your property, it usually means they know they are making an illegal search. Let that sink in for a second. When the police ask you “Can I search this bag?”, they KNOW they are asking you to let them make a search they are not legally entitled to make.

At this point, they can still search you if they have probable cause, but what you’ve done with your statements is make them declare their reason for doing so and force them to show they are legally entitled to search you.

SPOILER ALERT – COPS REALLY FREAKING HATE THIS. The best thing to happen to Civil Liberties in this country was the invention of the cell phone camera and YouTube. But just bear in mind, cops will do just about anything to avoid having you upload your video of them on YouTube or on Social Media.

This is an area where your own comfort level has to dictate how far you push it. Legally, since you are in a public place you are completely entitled to film and record what is happening. But cops will sometimes argue that you are “interfering with an investigation” and threaten to arrest you. Or if you have had anything to drink they will suddenly decide that you are “publicly intoxicated” and try to arrest you. As a Festival Buddy you have to decide if you can safely film what is happening. That’s because your other job as FB is to stay out of custody and post bail and let your buddy’s family know he just got arrested.

I suggest that you say the following if cops order you to turn off your camera.

“Officer, I’m not interfering with you in any way. I am just documenting this arrest. This is a public place and I’m entitled to record this”.

While making this statement, I would make a show of backing up and getting out of the way to prove that you are not interfering but just observing.

If that doesn’t work and your Latin is good you can just tell them, “Quis custodiet ipsos custodes” (pssst…that’s a joke but go ahead and Google it kids)

If things get crazier, be sure to get footage of the cop screaming “turn that camera off” before you turn it off. Everyone (You Tube, Media, Juries, Internal Affairs) loves footage of cops screaming “turn off that camera” to a calm person who is doing nothing but saying “I’m not interfering, just watching to make sure you are following the law.”

Okay that’s it for this column. Be sure to follow me on Twitter @Festivallawyer and be sure to tweet at me for comments on this story or future story ideas. I’ll be back in two weeks with a new column!

Read the Festival Lawyer’s follow up article, highlighting the best reactions and responding to the most pertinent questions from this article.