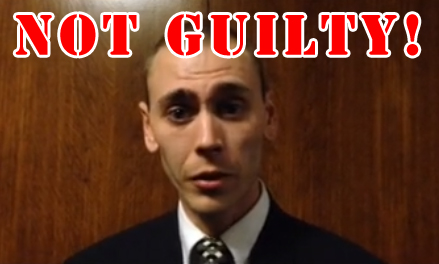 Last month I posted about Andrew Henderson, who faced two catch-alls – disorderly and obstruction – for filming police activities at his apartment complex in Little Canada, Minnesota. Yesterday, after deliberating for an hour, a St. Paul jury found him not guilty.

Much love to Henderson for standing on principle and speaking the truth! And if you took the time to call those who had been threatening him, or if you showed up in legaland to support him, thanks to you as well. Tyrants find it hard to operate when good folks are united.

Henderson had been represented by Kevin C. Riach and John W. Lundquist from Fredrikson & Byron, P.A., who were working through the Minnesota American Civil Liberties Union. Also present were friends active with Minneapolis-based Communities United Against Police Brutality.

In the two-day trial, Joshua Norgaard, a paramedic on scene when Henderson had his camera stolen, testilied that Henderson was at times only three feet away and that he verbally told Henderson to disassociate with the incident. Henderson throughout remained adamant that Norgaard never engaged him and that he was at least 30-feet away sitting on a bench. If the footage Henderson captured wouldn’t have been deleted, I’m sure there would exist objective evidence to support his claims.

In an interview with after the verdict was handed-down, Henderson told Richard Chin of TwinCities.com, “This has just reaffirmed to me that law enforcement needs to be watched … and held accountable for their actions.”

He also noted that he now utilizes a streaming app. If you have a smartphone without such an app, head over to http://CopBlock.org/Apps

In an interview with Chao Xiong of StarTribune.com Henderson noted that the charges, which had been pending for 16-months, had a deleterious impact on his ability to get a job.

Clearly, the threats levied at Henderson was reactionary. Throughout the entire ordeal it was those who claim to “protect and serve” who were in the wrong.

Jackie Muellner, then an employee of the Ramsey County Sheriff’s Office (who retired and is soon to start as a bailiff), stole Henderson’s camera and brought it home with her. When Henderson finally received back his property the footage from that interaction had been deleted. So much for transparency.

And Henderson wasn’t even charged at the scene. It was only weeks later that he was made aware that he was said to have acted criminally.