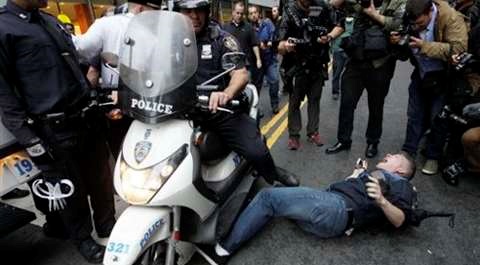 What happens when the law makers become the law breakers? What happens when the protectors become the attackers? Who is to be held responsible? Who is to be trusted? These are questions plaguing the minds of millions of Americans, who are scared, disappointed, and angry at the rising brutality of American police. Too many incidents of uncalled for police aggression and unjustifiable police brutality have cropped up in different parts of America. This cop violence phenomenon simply cannot be ignored anymore. Let us take a quick look at some incidents of police brutality and the common trends emerging from those.

A charge often placed against American police is their racial discrimination and inhuman treatment of minorities. The 1999 murder of the young, Black, West African Ahmed Amadou Diallo by the elite Street Crime Unit cannot be forgotten and only shows the deep rooted suspicion and hatred of some White American policemen against Black people. Ahmed did not have any criminal record and had 41 shots fired at him by the police in his own home in New York. What was the police’s justification? Ahmed apparently gestured with his hands in a way which made the police think that he was reaching for a gun.

In 2006, a 23 year old Black man, Sean Bell, was shot on his wedding day by NYPD officers. His crime? Officers say the victim and his friends who were celebrating Bell’s Bachelor party were going to use a gun when the police intervened. 50 bullets were shot at this young man. The city was outraged, and violent protests resulted. The above are not incidents in isolation. Racial prejudice is too obviously prevalent in American police and this dangerous trend must be curbed to prevent many more from being victimized.

17 March, 2013 saw the most terrifying set of events unfold for 27 year old Kim Nguyen. She and her male friends were stopped by an officer outside a restaurant in Los Angeles at around 2 am while waiting for a cab as they had been drinking. The police apparently thought they were intoxicated. However, while her male friends were left behind she was charged with public intoxication and put behind the car. While she was handcuffed, an officer began to sexually assault her by touching her chest and pulling her ears to face him. Then he started grabbing her left thigh and trying to open her legs. That is when she fell out of the vehicle to avoid being sexually assaulted by the cop. She was injured very badly, spent two weeks in the hospital, had bruises all over her body, lost all her teeth and had to have her jaw wired shut.

On October 30, in Detroit, a woman called 911 to seek help from police after being assaulted by her boyfriend. The cops come in, and one of them take her to the upstairs bedroom and sexually assault her. These are just the small fraction of cases that come in the spotlight. There are hundreds and thousands of other cases of police brutality against women convicts of which there is scant record or coverage. Innocent or guilty, women have become a soft target for police violence and assault and the boundaries between permitted and absolutely not allowed and humiliating are being blurred regularly by the police department. Steps to protect dignity of women during all types of police encounters is the need of the moment.

Suppressing Anyone Who Tries to Question the Establishment through Brutal Means

So you are underage while entering a casino. You are stopped by a police officer. You follow their instructions but have an argument with them or say something to them, even while complying with their instructions. What follows is five policemen beating you up brutally, kicking you, hitting, you, handcuffing you, then releasing a German Shepherd on you to attack you in the presence of the officers. You would be lucky to be alive – and so was 20 year old David Castellani, who suffered multiple, deadly, injuries in the attack. This is not fiction, but the facts of an incident that took place and was captured on camera on 15 June 2013 in Atlantic City. While the victim’s family filed a lawsuit against the inhuman officers, the police chief of Atlantic City stood by his officers’ actions.

Last year also saw uncalled for police brutality on 75 students of City University of New York who were demonstrating against former CIA chief, David Petraeus, who was being given a teaching position at the school.

Video footage of the incident has emerged that shows New York police being irrationally violent with the young students, slamming them against cars and pavements and punching them in the kidneys. What were the police trying to do? Can anything justify their barbaric behavior?

Dealing With “The Epidemic of Police Brutality”

Wrongful deaths, sexual assault, gun violence, physical threats and dreadful injuries, fire-rubber bullets at peaceful protesters; indeed we are facing the epidemic of police brutality. Demonstrators across the US took part in the October 22 protests to stop police brutality, repression, and criminalization of a generation. This day has been observed as the National Day of Protest to Stop Police Brutality since 1996. Despite many public efforts to stop this catastrophe, no concrete results have been obtained, and little has been done by state agencies. To counter police violence and convict and punish offending cops will require consistent and binding state policies, proper training among law enforcement officers regarding what the uniform permits them and what it does not and how their power is not to be misused.
Keeping an official record of such police misdoings and regularly suspending or punishing such policemen who have been involved in such incidents of police violence is absolutely necessary. The State, the people and the law enforcement agencies all need to work hand in hand to deter this uncalled, excessive violence. Violence is not legitimate, not justified simply because it is being committed by a law enforcement individual.

Author Bio:
Keith Killian is one of the principal attorneys at Killian Davis Richter & Mayle, PC, based in New Mexico. The firm exclusively focuses on personal injury, wrongful death, workers compensation and many more. Keith takes enough time to understand and analyze each and every aspect of his clients’ case. And eventually, his team works together to achieve the best possible outcome.