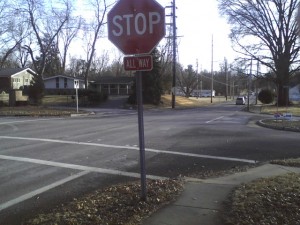 Steve Sagarra shared this post, which he originally published at sassafrasgazette.blogspot.com, via CopBlock.org’s submit page

Just after midnight on October 29, 2013, I traveled down Ross Avenue in a corridor of unincorporated west St. Louis County, Missouri, between Maryland Heights and Creve Coeur. I was only minutes from my residence, to which I was returning home after purchasing gas at a gas station on Lackland Avenue, off Page Avenue, in Maryland Heights; as I had done numerous times before, it was a round-trip of less than ten minutes not including the fill-up. After coming to a complete stop at the posted stop sign at the intersection of Ross Avenue and Merrick Drive, I proceeded on as usual down Ross Avenue toward Olive Boulevard. There was no one else on the road. Immediately, a St. Louis County police officer, who had not been traveling behind me nor was present at the intersection, approached with their emergency lights on. I was confused and disoriented by the sudden appearance of the police car, apparently entering the roadway from one of two subdivision entrances that comprised part of the intersection. At first thinking the police officer needed to get around me, I steered to the edge of the narrow roadway as best I could in order to give them room; realizing this was not the case, I turned onto the next available side street just past the intersection – less than a minute from my residence – with the police officer pulling in behind.

After some heated discussion concerning the matter, given my familiarity of and longstanding residence in the area, the police officer, Jasmine Schmidt, proceeded to cite me for allegedly failing to make a “complete stop at stop sign on stop line.” According to the citation, it was a violation of St. Louis County Ordinance 1206.030, “Intersections Where Stop Required,” which states, “Traffic on the highways or roadways in Schedule VI of this code shall stop before entering the intersection of the named highway or roadway described in Schedule VI.” Legal experts, particularly police officers who have discussed the matter with me, informally call this a “fishing expedition” citation used as a means to cite motorists for other, usually more serious, offenses. They suggested that Officer Schmidt clearly believed I was doing something else illegal, possibly drunk driving given the hour; when that proved false, she manufactured another, less serious traffic violation. When handing me the citation, she even noted on it the place and manner in which I could conveniently pay the fine. This immediately called into question another motive: revenue generation.