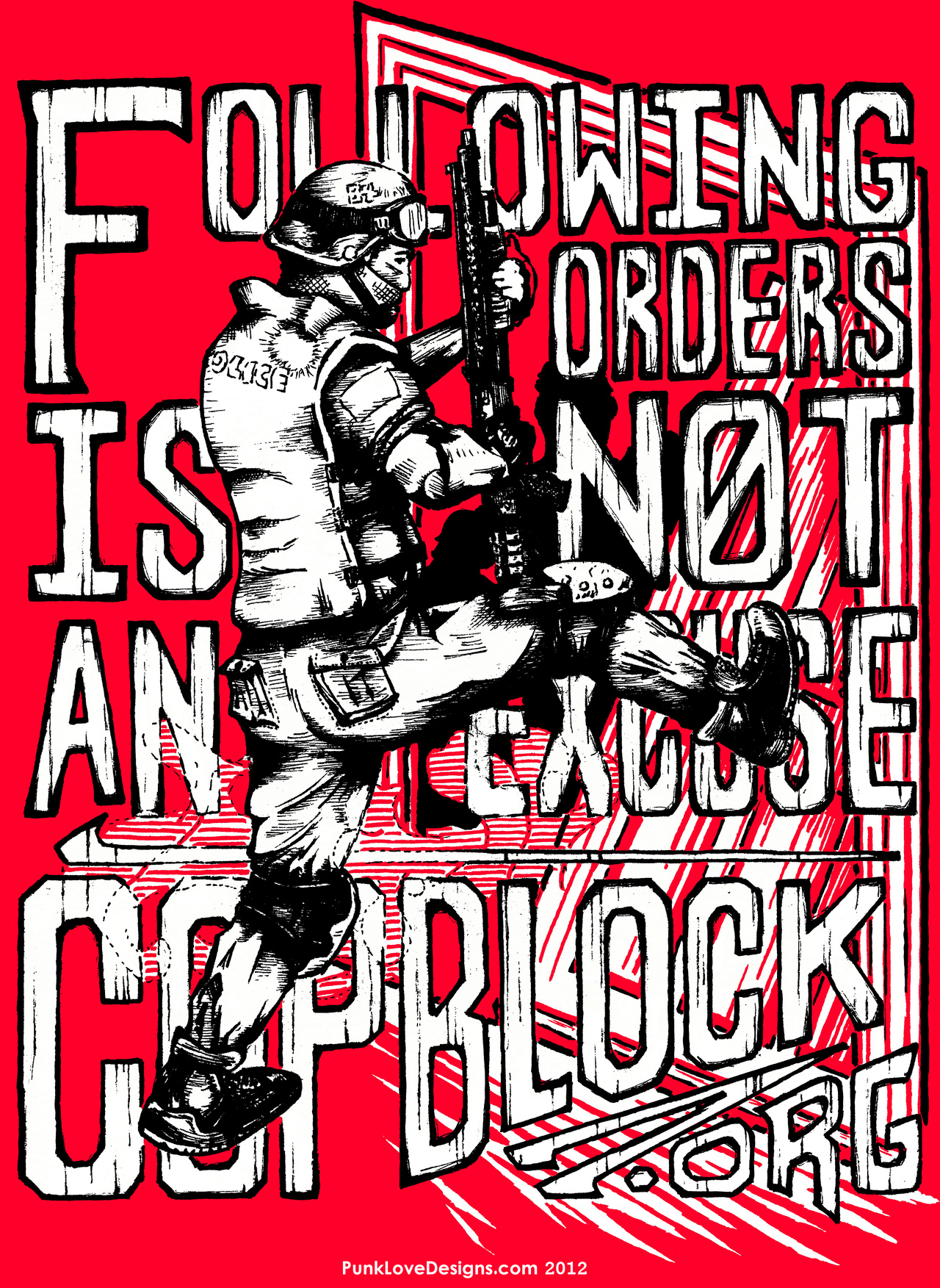 The text below comes from Jim Davies, who maintains a page called Quit Gov, where he states in no uncertain terms that “to work for government is fundamentally dishonest,” and lists a couple dozen occupations in a drop-down menu and encourages the reader to “take a look at one other page that comments on the work that you are doing.” The text below comes from the page titled “Police Officer.”

Police Work: It’s Not Even Close to Honest Work
by Jim Davies

Under this job title I’m including all law-enforcement departments, not just local P.D.s [police departments]; State troopers, FBI, DEA, TSA, BATF, the lot; and I’m including all who work for such organizations, not just those with a uniform or badge who meet the public. If that includes you, you’re working for the sharp end of government. Without you, government would be toothless.

You’ll have read the page in which government and the Mafia are compared, so you’ll have a general idea why this is a problem. And congratulations, for taking this closer look!

Every human being is his or her own self-owner. We each have a natural right to operate our own lives, without intrusion. If someone violates that right, then (and then alone!) action to remedy the matter is appropriate; whatever aspect of his self-ownership right has been violated (injury, theft of property…) needs to be put right. A justice system will be needed, in the coming free society, and part of that system will be firms competing for the business of finding and apprehending the violator. They will not be called “police” and they will have no special rights that ordinary folk don’t have; if they treat suspects with inadequate respect, they will do so on their own responsibility and put themselves at risk of being sued for compensation. Contrast the practice endorsed by the Supreme Court under which those arrested even for minor infractions can legally be strip searched; watch this short video. According to the government’s guardians of the Fourth Amendment prohibition against searches without reason, you may now be duty-bound to submit a sovereign American to that gross indignity. How does that make you feel? – disgusted, that a job once respected is now classed by public opinion alongside those of pimps, bullies and voyeurs? – or thrilled, with the new rush of power it gives you over your fellow human beings?

So let’s think about where today’s policeman gets his supposed authority to stop people who are not harming anyone else, and who are not suspects for having done so. What entitles a cop to enter someone’s home, without invitation? – or to stop his vehicle on the road, when he is driving without specific danger to someone else? Or to cuff and arrest him, and place him behind bars, when peacefully smoking a joint or engaging in voluntary trade?

The standard answer is of course that the victim may be breaking some “law.” Hence the modern title for cops; not so much “peace officers”, rather “law enforcers.” But what is the authority of a “law”? What is a law, anyway?

A law is simply a one-sided contract. A group of people persuade some others to “vote” for them to join a “legislature”, whose whole business is to write them. Now, if 100% of the community voluntarily agrees to that arrangement (explicitly agreeing to submit to the laws so written, even if they dislike them) the contract would be two-sided; and that does take place in the context of a private club. But as you know, we’re not dealing with a private club. Here, the fiction is used that everyone is subject to all laws, regardless. You and I can submit ourselves to a set of rules, but nobody can submit someone else to a set of rules!

So it’s no excuse, if you interfere with a peaceful person, to say “it’s the law!” I’ll not digress to discuss police brutality that is not sanctioned by some law. There are many examples of it to be found on the Internet – for example, here – and surprisingly, even the fictional but reality-based TV show “NYPD Blue” often portrayed detectives slapping a suspect around to try to make him talk. I wonder whether you ever saw such treatment in your precinct. The point I’m making is that police interference is unacceptable even when it is “permitted” by law. Suppose for example a law exists to prohibit the open carrying of handguns. A cop sees someone doing it, and sets out to arrest the carrier – who ignores the cop, knowing he has a natural human right to carry any weapon he may see fit, and the cop shoots him dead. That’s legalized murder, and the cop is committing it.

Was he “just doing his job” or “just obeying orders”? Is he free of responsibility? That’s a defense that was denied, in 1946 in Nürnberg. Those government people were acting legally, when they waged war and slaughtered captives; but they had consciences and were judged responsible for listening to them. So are you. Listen to it now.

Self-esteem is a vital part of life. We all need a purpose, a raison d’être, a way to feel pride in what we have been able to accomplish, a basis for ambition to achieve more in future.

Working for government undermines your basis for self-esteem and scars the conscience. Make a clean break; offer your skills elsewhere. Get an honest job – even if at first you have to take a pay cut. You’ll not regret it; at life’s end you will look back in pride and pleasure, and be able to say, “I helped build that!”