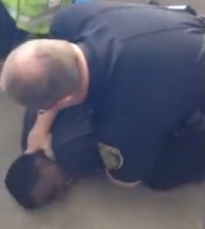 The incident happened on March 7th at West Brook High School but the cell phone video that captured the truth of the situation wasn’t made public until March 17th. As one commenter noted, “he knew what he was doing.” I don’t disagree.

Rivers is employed at Beaumont Independent School District Police Department in Texas. The head-honcho of that outfit – Clydell Duncan – was quoted in a local paper saying that Rivers was placed on leave.

I just called the BISD Police non-emergency number (409.617.7001) to see if area residents were still paying Rivers but I was told to check the local media for a statement. I did, and found that Rivers is NOT being paid. A first!

How much do you want to guess that wouldn’t be the case if the video didn’t exist??

Was the student who now has a broken arm engaged in a scuffle prior to the video starting? Perhaps. Did he deserve to have is arm purposefully broken by someone who claims to “protect and serve”? Definitely not.

This incident is unfortunately just one of a growing number happening in schools, thanks to the widespread invasion of schools by men and women who claim a legitimate right to initiate force.