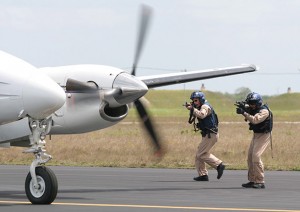 This video has multiple parts. The relevant part for this site is between the 0:37 – 3:30 time. Summary – Senator Pat Roberts (Kansas) is standing up for citizen’s rights (pilots in this case), and the Constitution. He is being stonewalled by the feds.

As a pilot and a citizen myself, I follow the theme on this site (thanks for educating me!), and have not succumb to the aggressive nature of the police. I’m tested often, and my only crime is being sued for a divorce. Now I’m having to fight to see my kids. I have 50/50 shared parenting, and still have trouble seeing my children – and I was the stay at home Dad!

Anyway, do NOT EVER consent like these pilots were “reported,” as doing. In fact, don’t even answer their questions. Each time we “allow,” them to violate our rights, they violate them even more. Give them an inch, and they take a mile. On at least four occasions now, I have refused to hand over my driver’s license. I’ve refused to step outside to speak to them. I’ve refused to answer any questions. All the while, I point out I’ve not committed a crime, nor was I suspected of committing one, and therefore being detained and interrogated illegally, is beyond their job and authority. This site and others like it have schooled me on exactly what my rights are. I’ve always stood up to unfair authority. But now, it’s given me the confidence to do so with the law backing me up!

For the most part, pilots are a straight laced group. Yet, this administration has gone out of their way to demonize airplanes, pilots, owners, and make flying nearly impossible. They are doing so as if the price of gas, and numerous lawsuits, hasn’t already killed general aviation already. Don’t think for a second they are all rich. Yes, some aircraft owners are doing better than most, but most “pilots” are not. You’ve probably seen that airline pay is so low that hundreds of flights are canceled because of lack of pilots. The pay has been so low, for so long, that college students are picking other professions, and now there is a huge shortage. On top of that, commercial pilots rank as the number three most dangerous job. Police? They rank number ten or eleven, on most lists.

I could go on and on about how the government and the corporations are killing an industry, but this is about control from a group that has no rights to control. Did you know that if a pilot of a private airplane changes his destination, on an IFR flight plan, the Air Traffic Controller is expected to ask why? There are times we just have to go to a bathroom (small planes don’t have bathrooms). Sometimes, the boss decides  s/he has a last minute change in business plans – or maybe there is a cute girl who finally texted you back. Is an airplane much different than a car? It’s only transportation. Is it the government’s business if you, a driver of your auto, decides to pull into a convenience store for a soda? What if you were contacted and asked why?

If you are a pilot, I challenge you to protect all of our rights and NOT answer any questions from the government, and for Pete’s sake, if you are challenged on the ramp, don’t say OK. Make them prove you are “suspected” of committing a crime before you allow them into the cockpit. Let me tell you, I’m a retired airline pilot and I’ve been known to NOT allow an inspector (or two) from just making himself at home. On two occasions, I’ve told them to get out of my cockpit! Do not let unjust authority grow. I have too many dead friends, and know all too well, the government is not “here to help.” Enough with this “Zero Tolerance,” policy! (As if their knee jerk rules are making the world safer.)