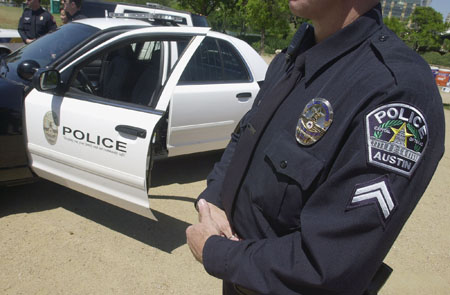 Last night (Sunday/Monday AM) at around 2:30 AM, three armed men and a woman tried to break into my house. They were yelling and pounding on doors and on windows. They shone bright flashlights through bedroom windows. They tried to force the back patio door open. They broke a window pane and tried to open the window catch. For at least 10 minutes they did not identify themselves in any way: I was very frightened as it reminded me of a situation about five years ago, when I gave a woman refuge when she was running from a gang of drug dealers who had stolen her Lexus, and they ended up pointing guns at me!

I was however unaware of most of what happened last night, as I have been ill lately and my doctor prescribed me a powerful sleeping pill, which I had taken at about 11 PM. My girlfriend Sherrie (a 65 year old retired school librarian) was extremely terrified and felt under attack. She says that for the first 10 to 15 minutes, the people hammering on our door and windows did not say who they were or what they wanted, but appeared very angry and aggressive. She could hear the people outside (one woman’s voice and two or three men) discussing how to break into the house. Someone went to the back of the house, where there was a loud crash (this morning we found he had fallen over a broken step) and then sounds of someone trying to force open a door.

Only later one of them said (rather quietly) that they were Austin police officers but she did not believe them, as they had not identified themselves earlier, and because they said it so quietly. She thought it might be a trick to get her to open the door. Also, we could not see any red and blue flashing lights outside and we live on a narrow street with double yellow lines, where police always use their lights if they have to stop.

These people then woke up our next-door neighbors (we live in a duplex) and asked if they had seen me that day. Our neighbor Kelly, who had only returned an hour or so earlier from working a late shift, apparently answered the door, and said he had spoken to me earlier on Sunday. Sherrie, having eventually convinced herself that these were real Austin Police officers, opened the front door to them and told them that she could not wake me due to the sedative my doctor had prescribed. They asked Sherrie if I was OK, and she assured them that I was ill but under the doctor’s care and just needed rest. By this time I was half awake, though still very groggy from the sleeping tablet, and was able to yell what did they want. I then asked if they had a warrant, as I could not see any other reason for this assault in the middle of the night. The officer said that he did not need a warrant to enter my house as he wanted to “check on my welfare.” He asked me to come to the door, which I could not do, as I was still so groggy with the sleeping pill that I was afraid of falling. He asked if I was okay and I told him I was. I told him he could not come in without a warrant. He then insisted on coming into the house, opened my bedroom door and shone a bright flashlight in my eyes, so that I could not see who was behind the light. He stated that someone who I had done some work for several months ago had been unable to contact me for several weeks, and had called them “expressing concern over my welfare.” When I asked who this was, he answered, “Dave” but claimed he did not know the person’s last name. The officer still failed to identify his name or badge number, did not leave a card, and I have no idea who he was talking about as I have no close friends named Dave. Customer jobs are filed by their last name or company name.

After they left, we both felt very traumatized. We were so frightened that we could not get back to sleep. My girlfriend’s stress was so great that she started having chest pains, and at one point I thought I would have to call an ambulance for her. I was still in the half awake half asleep state that you get when you are forcibly woken up after having taken a sleeping pill. I started having symptoms of a heart attack too (I do have a heart condition) but then realized that I was suffering from a panic attack and had to take two Xanax tablets to calm down. I am now (at 3 PM on Monday afternoon) still so shaky that I can not do any work at all today. Sherrie is so traumatized that she is saying she can not sleep another night in this house and nothing that I can say to her seems to calm her down.

The big question is, what gives Austin police the right to go around disturbing law-abiding citizens in the middle of the night?

I understand that sometimes there may be a plausible and immediate concern for a person’s safety. In fact, some five years ago, when I was living on my own in the country just outside Austin, I made a remark in an email to my daughter that was misinterpreted as an intention to kill myself. She tried to call me by telephone but when she got no reply, called Travis Sheriff’s department, and I awoke about 11 PM to find a deputy in my bedroom! He had crawled into the house through a dog door! Unlike APD, however, he was extremely nice and polite, sounded genuinely concerned over my welfare and apologized for disturbing me. In that case, there was a real plausible concern from my family and close friends – an immediate concern for my life.

In last night’s incident, I was only told that “a former customer of my business” had not been able to contact me “for several weeks.” I of course had been ill for that time, and in fact had hardly been out of my house until yesterday morning, when I was able to go to my church for the first time in several weeks. The officer told me he did not know this customer’s last name, which makes me suspicious that the informant does not actually exist – 911 always ask for full names.

Clearly this customer did not know me well, and I still do not know who it was. As a customer, he would have no reason to suspect that my life was in danger. Also, since the officer told me that “the customer had been trying without success to contact me for several weeks,” there was no immediate threat that would justify waking me in the middle of the night. In fact, both Sherrie and Kelly told me only three days ago that Austin Police had called during the day looking for me. They apparently did not state why they had called, and did not leave a message or business card. Both Sherrie and Kelly told the police that they would tell me they had called but the officer declined to leave a message and appeared to think they were lying when they told him they did not know where I was.

I can only assume that the police are retaliating because they could not speak to me the other day, and so made up this story of a “welfare check.” I have not committed any crime and don’t know why the police are persecuting me like this!

Law-abiding residents should have a right to sleep undisturbed at night. It is the police department’s job to make sure they aren’t disturbed, not to wake them up without reason!