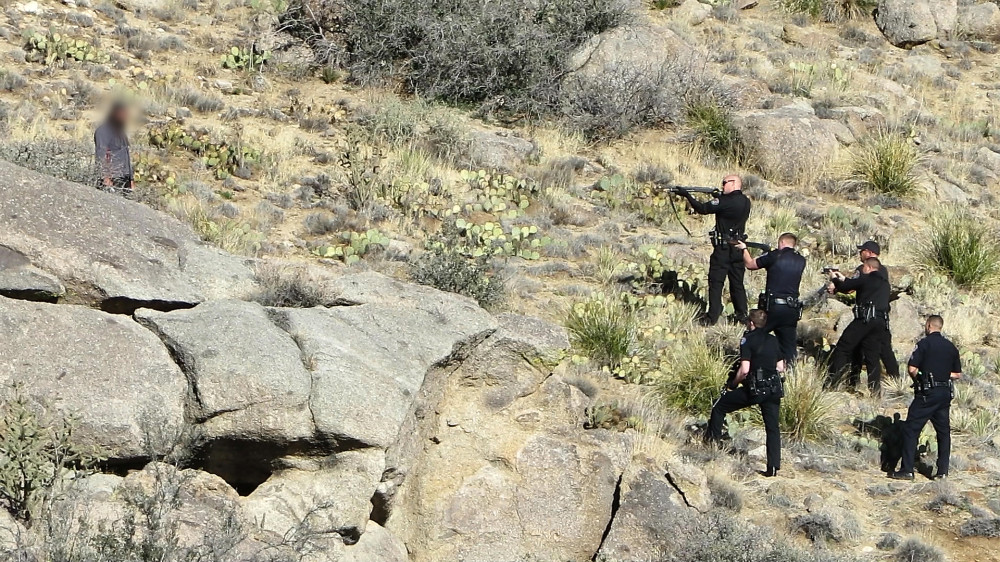 This post, originally published at ChristopherCantwell.com, was shared via CopBlock.org’s submit page by Christopher Cantwell.

So, you’ve probably seen this video titled, “Man Shot For Camping” or, “Homeless man executed for camping.” If you haven’t, I’ll embed it below. This has been showing up in all my social media streams, people are posting it as comments on totally unrelated threads, anything they can do to get this video seen by people.

Understand something, I’m all for making police look bad. If you’re not entirely honest in doing so, that’s understandable, they lie all the time. On the other hand, I think that by miscategorizing what happened in the video below, you’re doing a disservice to liberty by distracting from the point. If you haven’t seen it yet, watch the InfoWars clip below, and then see my commentary after.

Man Shot For Camping? Not Exactly.

If you’ve watched the entire video now, what you saw was police confront a man for camping. Apparently, before the video started, they ordered him to come down the hill, and he refused. When they got closer and the recording started, they threatened him. He finally offered to comply, and as he picked up his things, they opened fire on him, first with a flash bang and bean bags, then with the rifle, and then they set the dog upon him.

As they approached the body, you could see he had a knife in each hand. Here is your propaganda failure. People hear “Man Shot For Camping,” they find out the guy had a knife, and then they dismiss your story. He wasn’t executed for camping, he died because he brought a knife to a gun fight – a fight that he had every moral imperative to win.

The real tragedy here is that now those people will never realize what a sick and unnecessary act of wanton carnage this really was. A man with knives sleeping behind a rock in the middle of nowhere is hardly a threat to anyone, especially when compared to militarized police forces roaming about the streets and wilderness with a license to kill.

This man was dead the moment the police decided they had the authority to give him orders. When a police officer tells you to do something, he is threatening to kill you. It doesn’t matter if the order is to drop the gun, to pull the car over, to show your ID, or to walk down the street. The order is the implication that he owns you, and that he may destroy you if you defy his will. He may or may not go through an escalation before ultimately ending your life, but the threat is the same regardless.

Famous last words. As far as the officer is concerned, you have two options in this world. Obey, or die. The penalty is always death. You can either do what he says willingly, or find yourself a corpse to be rolled around at his discretion. Your only third option is to kill the officer.

When a man is so screwed over by the world that he lives in, that he is reduced to living out of duffle bags, and sleeping on the dirt in the wilderness, armed only with two small knives, the last thing he needs is a heavily armed group of well paid control freaks telling him to move or be shot. It may have been a poor tactical decision to pick up knives in the face of such danger, but it was a perfectly justified and understandable course of action. As more and more people are pushed to the point of having nothing to lose, we can expect more people to stand up to police aggression with force. We can only hope that some of them are better armed than the man in the video, and the police end up being the ones being carried out in body bags.

The even greater failure here, is the concentration on “militarized police forces.” Sure, this is a scary thought, and perhaps helpful in making people think about the world they live in, but I really want people to ask themselves if they actually think this would have been any better if the man was beaten to death instead of shot. The problem is perception of police authority, not the equipment police carry. I don’t care if somebody has tanks and rifles and all manner of weaponry. I care about people initiating force against others. If, instead of a team in tactical gear, a single officer had gone out in his normal uniform and shot the man with a single action revolver, the problem would still be the same.

To hear Alex go on and on about getting “the government, the bureaucrats, the politicians and the police” back under control is just sickening. Why start off with the premise that an institution with the authority to initiate force need exist to begin with? Is this outcome not predictable? Alex talks about history on his show all the time, surely he sees a pattern developing here. The moment you accept that you have a master, you tend to waive the right to call him servant.

The real story here is, an armed gang rolled up on a homeless man and attempted to rob and assault him. The man righteously resisted, and the gangsters gunned him down like a dog. If that isn’t enough to bother you, then you’re a sociopath and no amount of disinformation is going to convince you to rejoin human society.