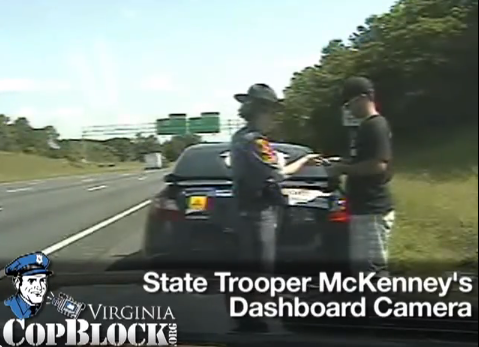 On March 17, 2014 I was served a “Warrant in Debt”. As you will see in the attached image, I’m being sued for $5,000 by Virginia State Police Trooper Melanie McKenney. Some of you readers may recall that two years ago I was pulled over by Trooper Melanie McKenney during Memorial Day Weekend when the Virginia State Police had many of their Revenue Generating Officers out on the interstates.

I had described it as the second most aggressive traffic stop I had ever been involved in. She violated my rights and denied my right to record her by claiming my cell phone could be a gun – however the information and videos given to me through the FOIA Request showed that she knew it wasn’t a gun, in her words, “I don’t want myself on any type of YouTube or whatever.”

If you are not aware of this incident and would like to see the article and videos of that incident click here. So almost two years later VSP Trooper Melanie McKenney is suing me for “Defamation”. That’s all the information I have and that apparently she has provided the courts. Below is a statement from my Attorneys Stephen Lewis and Danielle Lewis. As you’ll noticed it’s directed to local CBS 6 reporter Mark Holmberg who has already expressed in this story. After being pulled over two years ago, I asked the public if anyone else had run-ins with Trooper McKenney and what type of experiences they had. A handful of people replied and said they were in similar situations where she was unprofessional and rude. If you’re reading this and YOU have been pulled over by Trooper Melanie McKenney of the Virginia State Police, please contact Virginia Cop Block!

I am as confused about these allegations as anyone else. My suspicion is that she may be upset that her Dashboard Camera video, along with my cell phone videos, did in-fact make it to You Tube and have accumulated more than a Half a Million views. I will keep the public up to date on this situation.

Video and text below published to VirginiaCopBlock.org on August 31, 2012

*NOTE* The TIME of 3:36pm was written on both citations – noted for purposes of Text Message time-frame. The Text Message that Trooper McKenney sent/ received begin to play on the bottom of the screen in chronological order beginning around the 3:48 minute mark in the video. (All text messages appear to be sent/ received after completion of the traffic stop)