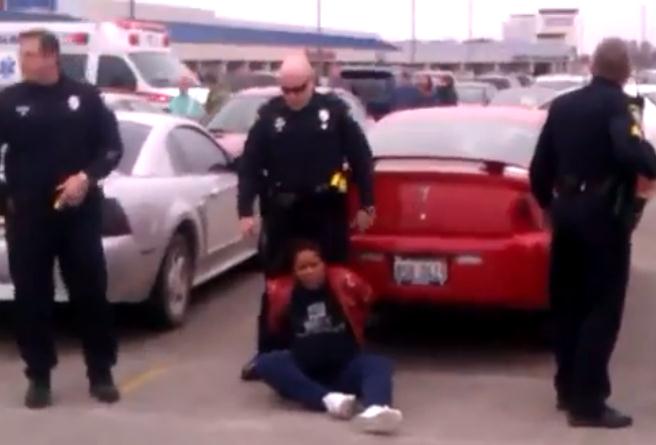 The YouTube video above is raw footage of the incident. A black female was involved in a fender-bender in a Best Buy parking lot in Springfield, IL with a white male. When the woman’s boyfriend became agitated, the SPD decided that this required multiple squad cars. What happens next is unclear, but ultimately the woman, who was 8 months pregnant at the time, was tasered. She has filed suit against the SPD; here is the local newspaper’s article about the suit.

A pregnant woman who was stunned by Springfield police with a Taser last year in the Best Buy parking lot has filed a federal lawsuit against the city and two officers who arrested her.

The lawsuit, filed in federal court Wednesday, does not list a dollar amount for the damages being sought.

Police said White was involved in a minor car accident in the Best Buy lot, 3193 S. Veterans Parkway. Frederick Thomas, White’s boyfriend, who was not involved in the crash, started yelling and cursing at the other driver and the officer taking the report, police said.

When officers attempted to arrest White, she allegedly resisted, prompting an officer to apply a one-second “drive stun” to White’s thigh.

A “drive stun” is when an officer holds the Taser against someone and applies a shock. It does not involve firing the projectiles and is intended to cause pain without incapacitating the person.

A few days after the initial arrest, police reviewed the incident and determined that the department’s policy on Taser use was not violated.

White was arrested and is facing a charge of resisting a police officer. That case is pending in Sangamon County Circuit Court.

White’s lawsuit paints a different picture of the arrest.

The lawsuit states that White, who was eight months’ pregnant, was “acting in a peaceful and non-threatening manner” when Higginson “forcefully grabbed White, tasered White and forcefully caused White to fall to the pavement.”

“The force used upon the person of plaintiff, White, who was visibly pregnant with child, was unnecessary and unreasonable,” the lawsuit contends.

The lawsuit adds that the Springfield Police Department has a “pervasive and unconstitutional custom, practice and policy of allowing and condoning the use of excessive force by its police officers against pregnant women.”

The suit seeks compensatory and punitive damages as well as attorneys’ fees, costs and litigation expenses.