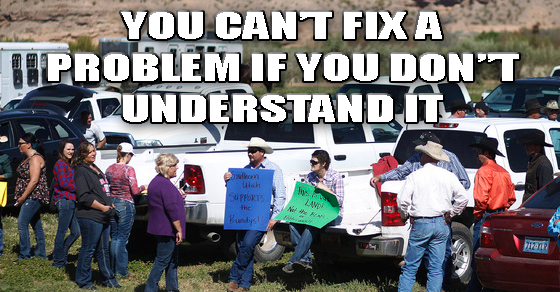 This article was originally published at ChristopherCantwell.com.

Surprisingly enough, I was going to ignore the story of Cliven Bundy’s ranch, which is presently under siege by federal agents from the Bureau of Land Management. A number of people thought this was right up my ally, to come at from a use of force angle, since so many people are speculating it will be the next Waco or Ruby Ridge.

On Facebook there’s all this buzz about “Oath Keepers” showing up. Protesters are being assaulted. Some are even speculating that this incident will be what finally sparks the revolution! People are talking about state’s rights, and the 10th Amendment, and powers of Sheriffs, and all these things that really would have seemed just fascinating to me when I was still in my limited government/sovereign citizen stage.

What’s happening at the Bundy Ranch?

The back story, in case you’re unfamiliar, is as follows.

Cliven Bundy has been battling the Federal Government for about 20 years. Bundy has a ranch in the area where he raises cattle as a business. Prior to 1993, Bundy had a permit to graze on “public” land, but the permit was revoked or allowed to expire for some reason. The BLM designated 186,909 acres of the Gold Butte area, where the ranch is, as “critical” for the survival of some fucking turtle in 1998, which it now plans to exterminate for some reason. Bundy continued to graze his cattle on the public land without permission, refusing to pay fees that the federal government demanded. Now there is some dispute over the amount owed, where the Bundy’s say the number is somewhere around $300k, and the BLM says it’s closer to $1 million.

He says he has rights to that land, because he got there first essentially. Tell that to the Native Americans.

So. there are just a few things I want to address about this story.

5. There is no such thing as public property

Honestly, to me, Bundy complaining that he can’t graze for free on land that he doesn’t own sounds more like Occupy Wall Street behavior than libertarian behavior. He might as well be complaining about farm subsidies. He has a for profit cattle ranch on private property, and his property can’t sustain his cattle, so he is going onto land that he does not own.

How many times are we going to have to go over the tragedy of the commons before people understand that there is no such thing? What people mistake for commons, or public property, is property owned by organized crime rings known as governments. Like any other business, they might let you use the property, they might charge a fee for the property, or they might tell you to get lost.

Anybody who ever thought a government was doing a “public good” by seizing land is a fool. When the BLM came in and said they were protecting turtles, it might as well have been Exxon coming in to drill for oil. There’s no such thing as public property.

4.The US Constitution did not, does not, and will not matter

While Obamacare is “the law of the land,” why anybody would still look to this document is beyond my comprehension. There are hundreds of armed men surrounding a man’s home, and people are talking about a centuries old piece of war propaganda that was discarded by George Washington when he signed the law authorizing the First Bank of the United States. the same document the second president of the United States, John Adams, discarded when he signed the Alien & Sedition acts. I could go through every administration in the history of the republic and tell you about egregious violations of the constitution that it committed, but that would make this a very long document.

No government was ever limited by a constitution, least of all the United States. Hell, the United States isn’t even limited by its own borders. So if a military presence shows up at your front door, and you look to ancient documents to chase them away, I’m sorry but it’s really getting to a point where I have trouble feeling sorry for you. You might as well be praying for all the good it is going to do anybody.

3. Every tax and traffic ticket ever written was backed up by the same threat of force

All you folks out there who say government isn’t violent, take a close look. If I had a dime for every time somebody told me, “They don’t force you, they just take you to court,” I’d be rich by now. When a government makes a decision, guns follow. The paperwork, fake attempts to negotiate, court proceedings, these exist only for the purpose of convincing the dissenter to surrender, or making the inevitable violence that follows his failure to do so look legitimate.

If you failed to pay your property taxes, and expressed a willingness to resist your local government, you would be facing the same type of situation the Bundys are right now. If you failed to pay traffic tickets and attempted to drive, police would kill you to stop you from doing so. In my book, these everyday occurrences are a far greater tragedy than some cattle rancher whose business was going so good he had to expand.

2. The amount of force is not the issue

People are making a very big deal out of the number of federal agents and police on the scene, and the type of weapons they are carrying. As I pointed out in the Albuquerque shooting of the homeless man, it doesn’t matter if a hundred federal agents show up with bazookas or the local deputy shows up with a stun gun, the problem is the initiation of force, not the weapons used to carry it out.

Anybody who accepts that the federal government has a right to force people to do things, but objects to the weaponry they use in the process, is making the same argument as gun control advocates. Anybody who has a right to use force, has the right to use as much force as they believe is necessary to accomplish the goal of said force.

1. Since the aforementioned issues are not understood, nothing good will come of this

Remove from your minds any notion that the Oath Keepers will restore the republic today, tomorrow, or the day after. No militia will come to the rescue of Cliven Bundy. The Sheriff will not assert some magical authority to expel a more heavily armed group of criminals from the territory. Bundy will not wait out federal authorities. Courts will not see the error of their ways and leave Mr. Bundy alone.

In the end, Cliven Bundy will be subjugated or murdered, just like everyone else who has dared to defy a tyrant. The same thing will happen to everyone who attempts a similar course of action until one of two things happen;

A. The extinction of the human race; or

B. A large enough segment of the population understands that government agents do not have the right to initiate force, stops talking about magical government documents, and realizes that the government’s lack of right to initiatory force, equals our right, and responsibility to defense.

Christopher Cantwell is an activist, writer, and satirist originally from New York.

From an anarcho-capitalist perspective, he covers news and current events, addresses philosophical questions, and even cracks a joke or two at ChristopherCantwell.com, and is a regular contributor to CopBlock.org and AVoiceForMen.com.