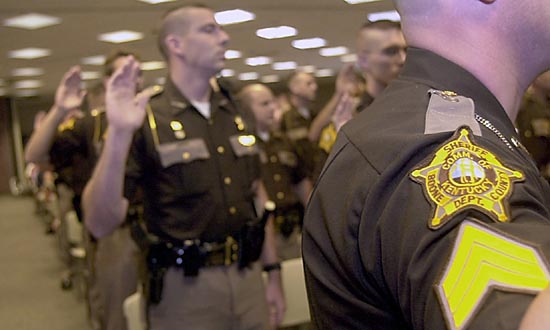 My boyfriend drives my car to work since his stopped being functional. On his way home each and every night, he sees countless cops along the highway. It takes about 45 minutes for him to get home from work. Each night, nobody pulls him over…except for on April fools day. I received a phone call from him at 1:30 AM informing me he had just been pulled over. I told him to leave the phone on and in his lap so I could hear what the cop had to say. The cop came up and noticed his phone was still on our call and sternly told him to turn the phone off. Thirty minutes later I figured he would have either been home or at least called me back, so I called him. He informed me he was being arrested and my car was being impounded.

These were the details: The cop pulled him over claiming my license plate lights were out. We checked right after we got it out of impound and they were fully functional, not to mention it’s not the first time someone has been pulled over in my car and no other cop has said anything about the lights being out. The cop arrested him because his license was suspended which we had never been notified of and should have been. It was suspended due to the fact that he didn’t get SR22 insurance by March 22; he was never told he had a set date to get the insurance, he figured he just had to get it before his court date for a speeding ticket he got.

While searching for weapons, the police officer told him to spread his legs but was not happy with how far he spread them, so instead of telling my boyfriend to spread them further, he slammed my boyfriend’s head onto the car and kicked his leg out. My boyfriend is not defiant with the law. He is a proud military man and doesn’t want to lose his ability to be in the services; knowing one bad police report could get him a dishonorable discharge, he doesn’t disobey the law. After the cop searched him and found nothing, he cuffed my boyfriend to the point of bruising his wrists. They towed my car because the plate sticker expired on February 28th and we had not gotten around to renewing it. Also, I had just filed for insurance but had not received the cards yet, so he got us for no insurance.

About a week later, we found out this cop is now under investigation and may lose his job, mainly due to this incident.