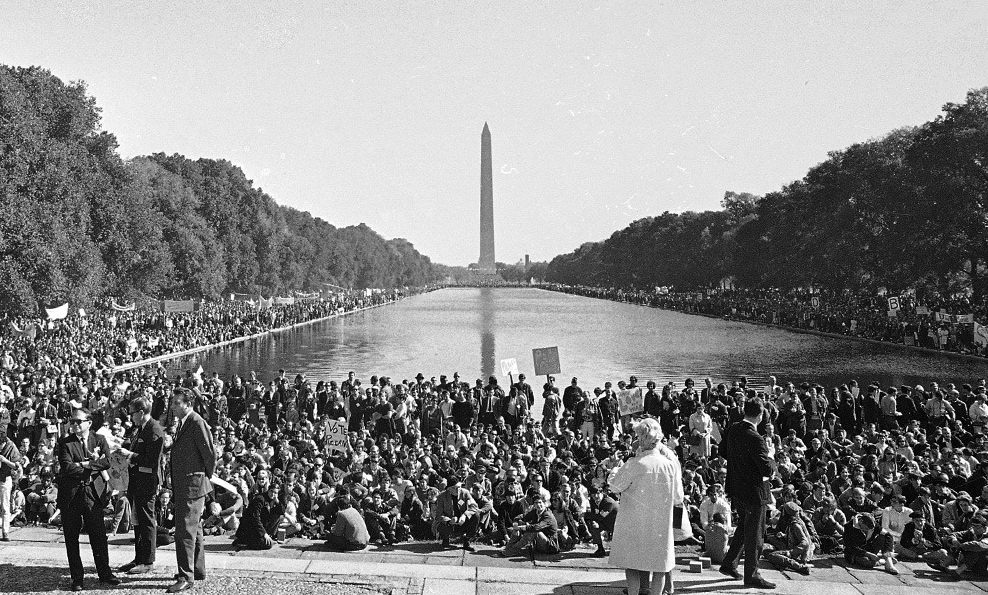 Monday morning, May 3rd – the weather looked nice, so Veronica Ballentina decided to walk from her Georgetown apartment to work. She didn’t make it. Ballantina had been approached by gang members, who kidnapped her, and brought her against her will to one of their DC safehouses.

An hour later, less than two miles away, David Harrow stepped outside his bookstore in Dupont Circle to have a smoke. Without warning he was pummeled by marauding thugs. Harrow too was taken and held against his will.

While Ballentina and Harrow are fictional, the situations described did occur. Not just to two people, but to thousands.

Thanks to the unjust actions of those who claimed to “serve and protect,” the 1971 May Day Protests holds the distinction within the arbitrary political boundary of the united states of being the date when the largest number of individuals were kidnapped and caged in a single day. DC – the headquarters of a regime that perpetuated institutionalized violence thousands of miles away in Vietnam – was the meeting place for those disgruntled, who sought to protest and physically block those involved with the war machine.

The May 17, 1971 edition of Life covered the incident in a write-up entitled, “The Biggest Bust: Washington Prevails Over the Protesters,” which included these excerpts:

Antiwar militants mounted a display of aggressive civil disruption in Washington’s streets that strained the city’s order, and the [so-claimed] authorities responded with a wave of quasi-legal detention that warped the rule of law [note: the “rule of law” is a farce, for more, see this, and this].

The result was the largest mass arrest in the nation’s history: 7,200 in a single day and a total of 13,400 during four days of gradually de-escalating confrontation. Along the way, Americans were treated to some striking snapshots of their Capital that seemed more appropriate to Saigon in wartime than Washington in the spring: youthful partisans darting into the street to block or slow commuter traffic; Chinook helicopters disgorging squads of flak-jacketed marines on the Washington Monument grounds; thousands of captives herded into an open-air, wire-fenced stockade.

But even in official ranks, there were some doubts whether order had not been purchased at too high a cost to the law [legislation].

The Mayday Collective, sponsors of the plan to clog traffic, had published its intentions for all to see. The 1,400-man District of Columbia National Guard had been called up to assist the D.C. police, 5,100 strong, and 10,000 more Army and Marine troops were held in readiness nearby.

A battalion of the Tenth Marine Regiment, Second Division, held Dupont Circle… [Three hundred soldiers from the 91st Engineer Battalion were on Key Bridge, and Potomac and covered by military guards

Small groups “darted into the highway and linked hands to block traffic… Several ancient jalopies were stalled and abandoned in the middle of the road… Arizona Se. Paul Fannin had his tires slashed… A dilapidated garbage truck was overturned, and so was a huge tractor trailer

…the demonstrators’ tactics – to sally, scatter and regroup – made it almost useless for the police to stop the melee merely by dispersing the participants

Washington DC Police Outfit head Wilson communicated that normal field arrest procedures were to be suspended – “just bring them in and lock them up.” Wilson later attempted to justify his proclaimed tyranny by stating, “I took these steps because I felt they were necessary to protect the safety of law-abiding citizens and maintain order in the city.”

Wilson’s colleagues systematically employed coercion, together kidnapping and caging thousands not even suspected of a crime, all of whom were charged with “disorderly conduct,” given the same date of arrest (May 3rd) and place of arrest “District of Columbia.” The field for “arresting officer” was initially left blank, then later one of seven police employees names was added.

Unable to house all those captured in their cages, thousands were brought to a stadium and fencing erected. Eight legaland rooms (courts) heard on average one case per minute. Swift, but definitely not just. The head of the ACLU at the time, Aryeh Neier, called the round-up “a planned process of perjury.” Did Wilson or any of his lackeys ever face repercussions? What do you think?

Later, the fingerprints and photos taken of demonstrators were turned over to the criminal gangsters working at the Federal Bureau of Investigation. Some thought this was one of the main reasons the roundup was done – to gather information on the identity of those who most threatened the Statist Quo.

Why is this relevant today? Because it demonstrates the lengths some may go to protect the charade that positions them as “rulers”, and underscores why it makes zero sense for you to buy into the pretense of justice peddled by those involved in a coercive monopoly. And if you happen to work as a police employee, perhaps this bit of reminiscing will be the nudge needed to step back from the ‘thin blue line’ and act on your conscience.