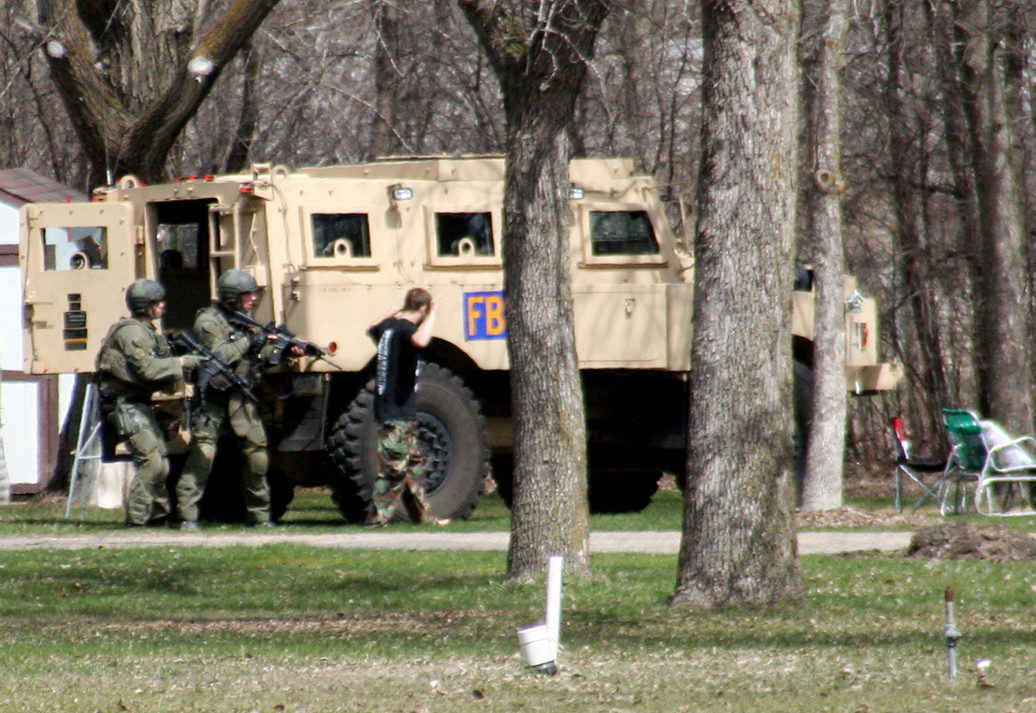 A militia member indicted in what the FBI once characterized as a terror plot to blow up a Minnesota police station has been sentenced to three years and four months. Twenty-five-year-old Buford Rogers will receive credit for the year he’s already spent in jail. Fifty 50 law enforcement officers raided his parents’ mobile home in Montevideo last May. Rogers was sentenced Monday after pleading guilty to one count of possessing a firearm illegally and one count of possessing an unregistered destructive device.

– so it was reported in an unsigned Associated Press write-up posted at MN-based KSTP.

Rogers was labeled a “terrorist” on the national news thanks to the keen investigations done by some folks wearing badges but in the end, the millions spent on all those involved netted what? A guy who is supposed unable to own a certain type of property that is conducive to protection admitted* that he had a firearm. Also, that he had a destructive device**.

Even the person who oversaw the legaland hearing, Ann Montgomery, admitted that the case received an “inordinate amount of attention” for something routine for her and her colleagues.

*I’m not sure what offense Rogers is said to have done, or did previously, but I certainly don’t believe everyone labeled a “felon” should not have the choice to keep and bear arms if they so choose – many did nothing violent but may have possessed a plant or traveled without a permission slip.

**Rogers’ father said he had some pipes for plumbing. Rogers acknowledged having some black powder. Where’s the victim?

Ultimately both issues – the firearm and the “destructive device” comes down to an issue of compliance. Or more specifically, to non-compliance.

Rogers did not obey the proscribed dictates by some people who claim the right to rule him and you and me. Rogers had a firearm when he was told he wasn’t supposed to. The issue wasn’t the “destructive device,” it was his failure to get permission. If those who seek to control others are ignored they loose credibility. Their legitimacy erodes. As it should.

Rogers is one of the most recent to be caught up as part of the marketing scheme used by employees of the federal bureau of investigation:

As was noted in early February in “Terrorists” in Minnesota – Latest Fable of FBI Employees:

Once Rogers was arrested the FBI launched its spin campaign. Just standard operating procedure out of the FBI book on what to do on the heels of a “terrorism” plot bust. Rogers was said:

Even if all those things are true, they’re certainly not criminal.

Who are “Authorities”? Is someone an authority simply because they claim it so?

And why the dig for ostensibly being “anti-government”? Clearly because the text was crafted by the corporate media machine that acts as the fourth pillar of the government that is opposed, or more precisely, the type of government. I don’t pretend to know Rogers’ beliefs intimately. But based on input from various sources, I do believe he recognized that what today exists is not ideal.

Someone might claim that I am anti-government, but that is not true. I am pro-government – self-government.

Feds: No terrorist plot in Montevideo by Randy Furst in the 2014.04.25 Star Tribune