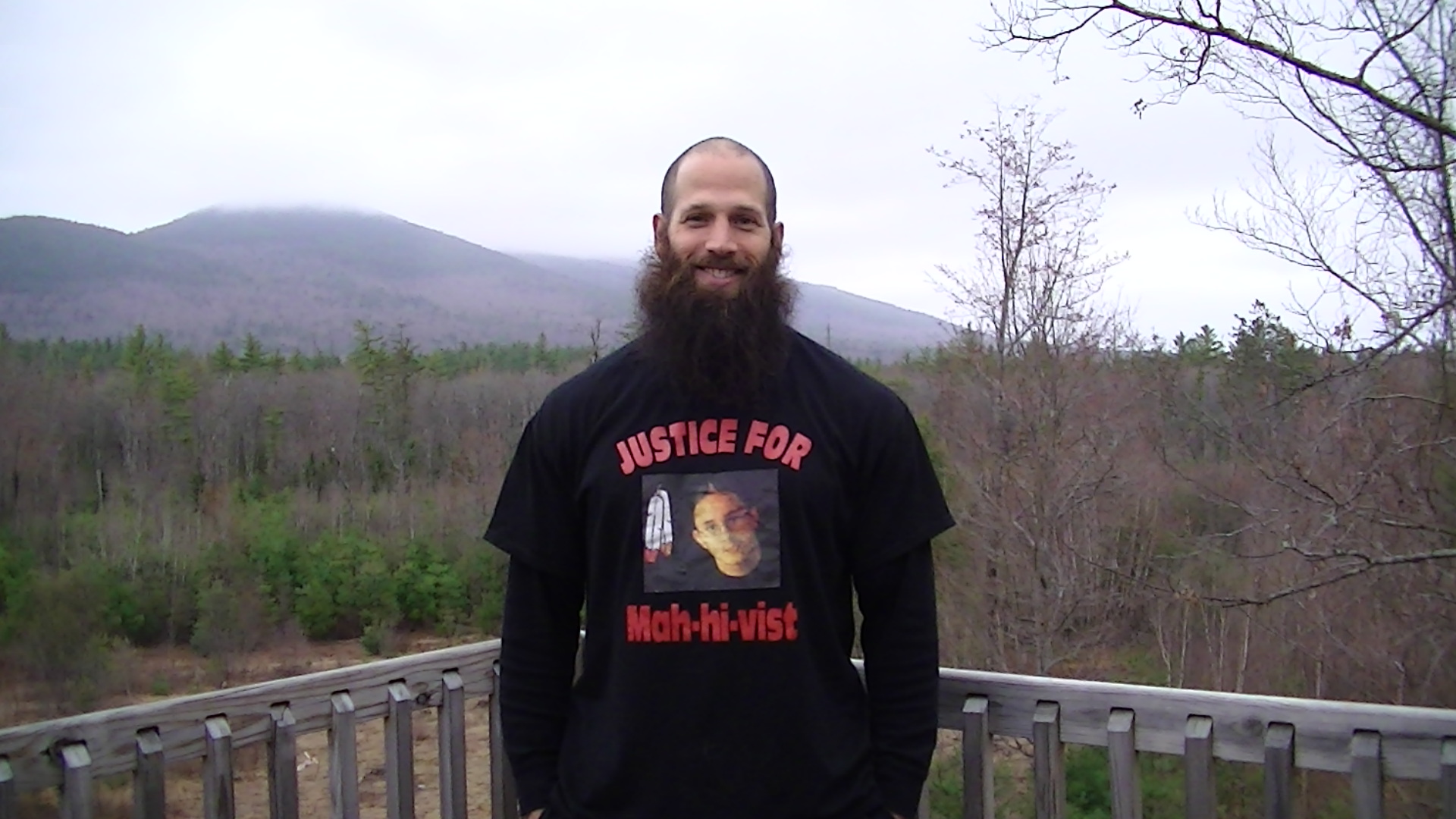 In late December 2013 a call was placed to 911 by the parents of an 18-year-old who believed the responding police employees could help to calm their son, who was having what they deemed a “mental episode.” Instead, their son was killed, shot seven times including a shot to the back of the head. The shooters wore badges. Dennis Smith, the DA of Custer County, in western Oklahoma, said they were justified. I don’t agree.

Someone had suggested I look into the death of Mah-hi-vist (which means “Red Bird” in Cheyenne) Touching Cloud Goodblanket. In early March I met his parents, Melissa and Wilbur, as I rolled east on my jaunt. I spent half a week in western Oklahoma with them and others in their community. The couple is definitely resolute and well-respected, and I believe, speak the truth when stating that their son was taken unjustly.

In her own words, Melissa shared on the Facebook Page created to exchange information about her sons death:

My name is Melissa Goodblanket and my son was shot 7 times by local law enforcement (ONE SHOT TO THE BACK OF HIS HEAD) in our home December 21, 2013. He was experiencing an ODD episode that prompted us to call 911 for assistance in calming the situation. “We thought he was going to hurt himself”.The end result left our 18yr old son lifeless on our living room floor. The local DA office ruled our sons death Justified and all the officers involved in this atrocity are free to live their life normally. While I have tried and tried to contact CNN and other national media our story still remains untold. We live in a rural area of the far western section of Western Oklahoma, Clinton Oklahoma where the politics are tightly connected and many injustices are deemed warranted against people of color. We are an American Indian family, with strong spiritual roots. Our sons death is the second native youth in two years who was shot and killed by law enforcement when family was seeking aid to prevent harm during a mental episode. There is also a murder of yet another tribal member that has been left unsolved that falls under the same umbrella of time. We are not a family that goes away in the presence of such a dark storm and we are hopeful someday, some way, some how the truth as we know it will surface and come to light for the masses to see and hear. In the meantime we have started the proceedings for wrongful death and will continue to rally at the State Capital for “Truth and Justice”. And we will continue to tell our story until people begin to listen and stand with us across this country to rebirth integrity, compassion, honor and respect for life. We were never questioned when the officers arrived, they literally storm trooped our home and murdered our son. We must stand together united all people to initiate change in policy, procedures, training, and implement the expertise of those equipped to deal with mental health issues and further employ those individuals who clearly stand to serve, preserve and protect life! Thank you for listening and I may be reached via facebook. The Touching Cloud page is dedicated to our son and continues to be updated with information on our progress. “This type of atrocity is happening all over this country and will not stop until the masses unite in one accord and demand change.” I may also be contacted by email at melissalgoodblanket@yahoo.com

Immediately after the shooting death a couple Custer County sheriff employees were given a paid vacation but they’ve long been back on the streets. To be clear, thus far, those who took the life of their son have faced no responsibility.

The supervisor of the killers, Bruce Peoples went into spin control mode after the shooting – immediately backing his colleagues and either purposefully or unknowingly misstating facts.

When I stopped by the facility where the killers are employed no one would speak with me, not even the woman working the front lobby desk – almost as if they’d been instructed not to communicate with me, perhaps after being tipped off of my presence* as I had visited the Oklahoma State Patrol facility in Clinton the day before**, where some also present at Mah-hi-vists killing worked from (in total, five Custer County sheriff employees, six Oklahoma State Patrol employees, and a couple Clinton police employees, and am ambulance were present at the Goodblanket property).

The incident was investigated by employees of the Oklahoma State Bureau of Investigation, who provided their report to Dennis, who last week found the shooting “justified.” That isn’t by itself surprising – that actors who work for the “justice system” are subjected to perverse incentives and they act accordingly. Double standards are applied to the kings men.

The Goodblankets are now considering filing a suit against those involved. A couple of weeks ago they and dozens of others held a rally outside a domed building in Oklahoma City, where they vocalized their quest for justice.

I am under no illusion that justice can ever be had through an institution that at its core is coercive. It is tragic that Mah-hi-vist was taken. But there is good coming from this. The Goodblankets have not cowered. They have undoubtedly empowered others to come together and speak out. Mah-hi-vist lives on in each of us who strive for truth – that badges don’t grant extra rights.