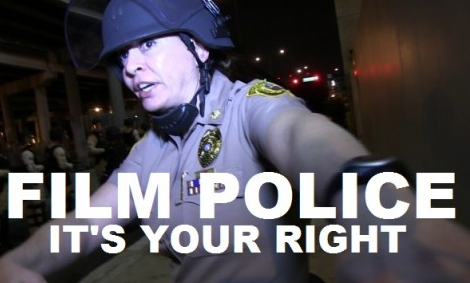 USA Today recently published an editorial denouncing the abuse of wiretapping laws by police to censor people who try to film police encounters. I’m happy to see yet another publication defending the right to film.

Anthony Graber admits he was breaking the law when he zipped down I-95 near Baltimore last March on his motorcycle, ignoring the speed limit and popping wheelies as he raced by slower traffic. But that’s not what has him facing felony charges that could land him in prison for up to 16 years.

Graber was wearing a helmet camera that recorded his adventure — as well as the shouted orders from a plainclothes Maryland state trooper who cut him off on an exit ramp and drew his gun before announcing that he was a law officer. A week later, Graber posted the videotaped encounter on YouTube, and the law came down on him, hard.

Police searched his home and confiscated his computers. State attorney Joseph Cassilly charged him with four felony counts, chiefly with violating Maryland’s wiretap law. If he’s convicted, the YouTube video could land Graber in prison, strip him of his right to vote, take away his security clearance and disqualify him for some jobs for years.

This is an abuse of prosecutorial authority and a misinterpretation of state law. But it’s typical of the attitude of too many prosecutors and police toward people who record their encounters with law enforcement and are usually completely within their rights to do so.

In many jurisdictions, the police themselves record these encounters with dashboard cams in their cruisers. Most of the time, these cruiser-cam videos show law enforcement officers doing their jobs with great competence and restraint.

Occasionally, however, citizen videotapes show an entirely different set of events than the police report. In March, for example, police in College Park, Md., arrested several students after celebrations following a basketball game turned rowdy. Police charged two students with assaulting mounted police and their horses — until a videotape surfaced that showed police officers beating the students. Charges against the students were dropped, and the officers faced investigation.

Some police departments have acknowledged reality and instructed officers to assume they’ll be recorded and act accordingly. Other departments learn the hard way. Beaverton, Ore., was ordered last month to pay a $19,000 settlement to a man arrested after he videotaped his friend’s arrest.

As police officers point out, videotapes can be taken out of context, or show an incomplete story. And, in some instances, police might have a legitimate need for privacy, such as when they meet with informants. But there are ways to deal with this without shutting down citizens’ rights to protect themselves from abuse.

USA Today also published an “opposing view” penned by two condescending and completely clueless cops who don’t seem entirely sure what they’re trying to argue. According to the authors of this piece,

Our problem is not so much with the videotaping as it is with the inability of those with no understanding of police work to clearly and objectively interpret what they see. Videotapes frequently do not show what occurred before or after the camera was on, and the viewer has no idea what may have triggered the incident or what transpired afterwards.

Policing is a job full of extraordinary risks. Officers have no choice but to make decisions based upon split-second determinations coupled with their training and experience. Out of approximately 400,000 men and women who regularly patrol the streets and highways (we are not counting an additional 400,000 who have purely administrative assignments) an average of 160 will be killed, 60,000 will be physically assaulted and 20,000 will receive serious injuries in the line of duty every year.

No one can speak knowledgeably about a piece of video without viewing it through the prism of experience and training. It is not a question of whether a citizen has the right to videotape an incident, but a matter of ensuring that any officer involved has the right to due process and fair, objective treatment independent of subjective and sometimes ill-informed opinion based on a videotape showing but a vignette of a significant event.

In other words, it is impossible to be “objective” about a piece of video involving a police officer… unless you are a police officer. Us mundanes who lack the magical powers afforded by the “experience and training” that police officers have just can’t come to any definite conclusions about such footage. Especially if the video is just a “vignette” — you know, like a “vignette” depicting an execution-style killing of an unarmed and restrained man by a police officer. Since we haven’t seen what happened before the cop slaughtered the defenseless man, we’ll just have to give him the benefit of the doubt. Anything else would be unfair. He did have a “risk[y]” job that required him to “make decisions based upon split-second determinations,” after all.