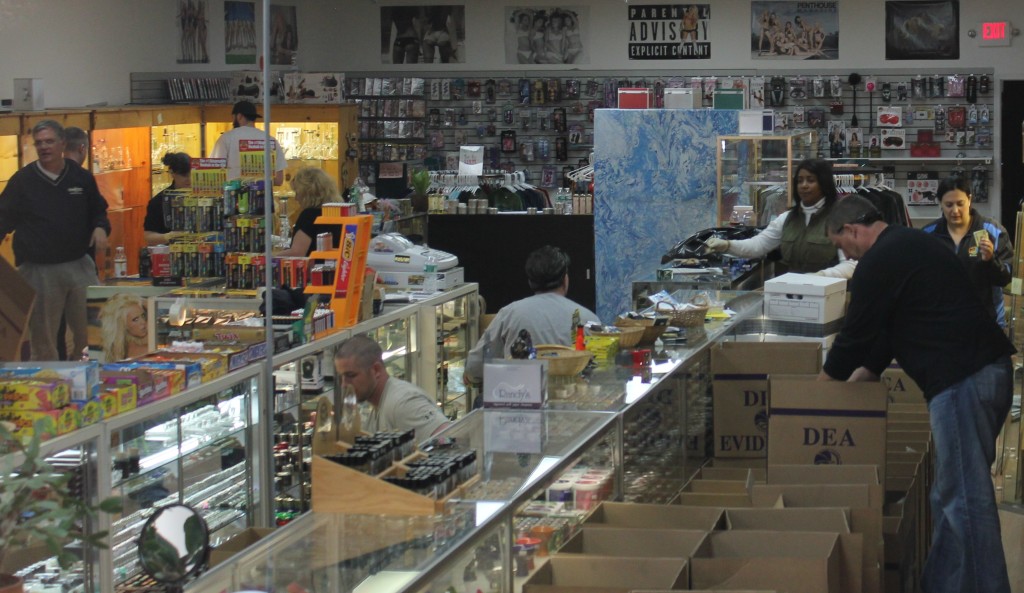 This article, shared by Ian Freeman via CopBlock.org’s submit page, was originally posted at FreeKeene.com.

Reports in national media claim the DEA has raided synthetic drug suppliers in 25 states, but Keene’s Phat Stuff hasn’t sold synthetic drugs since mid-2013. According to the sealed warrant, which you can see here, the agents were taking all smoking devices, as well as sales records from 2011-today.

The approximately dozen agents spent five hours boxing up thousands of dollars in various pipes, water pipes, hookahs, and accessories. After 4pm, they loaded it all in the back of a Uhaul and took off with the loot at approximately 4:20pm.

At least two agents had balaclavas on outside the store, but not inside. The cowardly man exiting the heist vehicle in the picture on the right, a Uhaul truck, will be seen in the videos without his mask on. Stay tuned for that!

In response to us recording video through the storefront windows which had already been mostly obscured by newspaper and black tarp, agents papered over as much of the remaining viewable area as possible, in desperate attempts to avoid accountability for their craven actions. Keene police officers Jason Short and Todd Lawrence took turns guarding the front door.

As the agents loaded the getaway vehicle with dozens of DEA-branded cardboard boxes full of thousands of dollars worth of pipes and accessories, an angry group of Keene inhabitants gathered to give the agents a piece of their minds. The agents were informed that they are not welcome in Keene or NH.

Video and more to come. Sneak a peek at some RAW footage as it is uploaded to the Fr33manTVraw channel.

Stay tuned to this post and the Free Keene blog for updates.