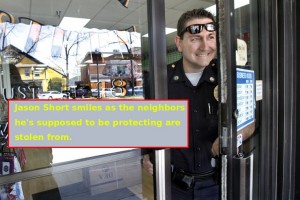 This post, shared by Michael via CopBlock.org’s submit page, is in reference to the recent raid of Phat Stuff in Keene, NH.

Sales associate Andrea doesn’t understand why this happened, because they “followed the law.” Masked men stole the products at the business under the guise of legality.

In a world where natural law prevails, these acts wouldn’t stand. Unfortunately, in this reality, men rule one another based on words written on paper, often performing immoral acts in the process. “Just doing my job,” is a common phrase said by those who are aggressors against their neighbors for harming no one. Agree with what Phat Stuff sells or not, it’s their natural right to be productive.

I’ve visited Phat Stuff a few times and witnessed first hand the talent involved in glass blowing. There is no telling how many thousands of man hours went into these artful pieces stolen by masked men and likely to be broken unintentionally or with malicious intent. If these individuals calling themselves DEA were proud of their actions, why don’t they dawn uniforms and uncover their faces?

Phat Stuff pays property taxes which pays the salaries of Keene PD and the Cheshire Sheriff’s Department for protection from theft. Surely these “protective” agencies knew this raid was coming.

The truth is, Phat Stuff doesn’t “pay” taxes. Nor do any of us. We are forced to under duress. If we voluntarily paid taxes, we could contact the “protective” agency of our choosing and would receive protection from theft. Instead, the entity calling itself the City of Keene sends Jason Short to guard the door and smile as his neighbors are stolen from. Shame on you Jason Short. Shame on all of you who participated in this theft directly or indirectly. Whether you like what Phat Stuff sells or not, this does not give you the right to take what isn’t yours.